Bottomline: Of windfall cess, and the oil mess

Bottomline: Of windfall cess, and the oil mess High oil prices and a depreciating rupee are a worrying cocktail for the government. The windfall taxes on oil and fuel will help the government balance its books but muddle the oil industry equation again

The government has far-reaching powers. This was amply evident on Friday when it decided to impose a cess of Rs 23,250 per tonne of crude produced in the country, while also setting limits on fuel exports and taxing such exports at Rs 6 per litre on gasoline and Rs 13 per litre on diesel.
Purported as a step to curb making of abnormal profits by oil producers, who’ve been riding the surge in global oil prices, and by exporters of refined products who are finding strong demand for their products overseas, given the geopolitics-driven crimping of global refining capacity, the measure also smartly helps to ease pressure on the exchequer.
The likely motivations
High oil prices and a depreciating rupee are a worrying cocktail for the government. Already several experts are projecting the current account deficit (shortfall after netting off the value of all exports of products and services against the imports of all goods and services) will significantly surpass the comfort range of 2-2.5 percent of GDP, driven by elevated oil prices. Add to this the recent need for India to import refined products to meet domestic needs, even as these products were being exported, clearly accentuated the problem.
A burgeoning deficit is most worrisome as it has implications for both the currency value and forex reserves. Letting the currency depreciate can push up imported inflation while depleting the reserves poses other risks. This, therefore, had put the regulators in a bit of a pickle.
Also Read | Explained: What is windfall tax and why has the govt levied it on refiners?
The taxing moves on Friday seem aimed at addressing some of these problems. At one end, the government takes a significant slice of the extraordinary profits being made by oil producers and a share of the gains on exports of refined products, while on the other the mandating of domestic sale of diesel (30 percent of exported volumes) and gasoline (50 percent) ensures the pressure to import refined products eases.
In the process, it helps bridge to a large extent the Rs 100,000 crore hit was expected to take on its revenue with the recent excise duty cut on fuels. The oil cess alone will fetch it over Rs 65,000 crore (given India produced 28.4 million tonnes of crude in FY22).
That’s all very well, and smart you might say. But what the move has done is queered the pitch further in India’s oil & gas sector, which has historically been riddled with regulatory hurdles that deterred private investments.
The oil mess
First, the oil cess now imposed does little for the sector. The money being mopped up has not been earmarked for a specific purpose aimed at developing the sector, as most cesses usually are, Krishi Kalyan, Swacch Bharat, road, education and clean energy cesses, for instance. Logically, a cess on profits earned by a sector should be used to address problems in the sector, but the government’s immediate fiscal needs seem more pressing.
And, anyway, there’s been little headway on enhancing oil production in the country over the years despite much talk about it.
The recent clean energy bogey is also just a mask to cover the significant inadequacies of governance on this front. The reality is that the world will not be free of fossils for many, many years to come, as none of the emerging energy sources will be able to significantly replace their use.
There’s more than enough publicly available data to suggest that fossils will still account for over 70 percent share of energy needs in 2050.
India being an oil-dependent country should have expanded its owned resources of energy, but its track record on this front leaves much to be desired. How indigenous crude output has trended in comparison to oil imports tells the real story. 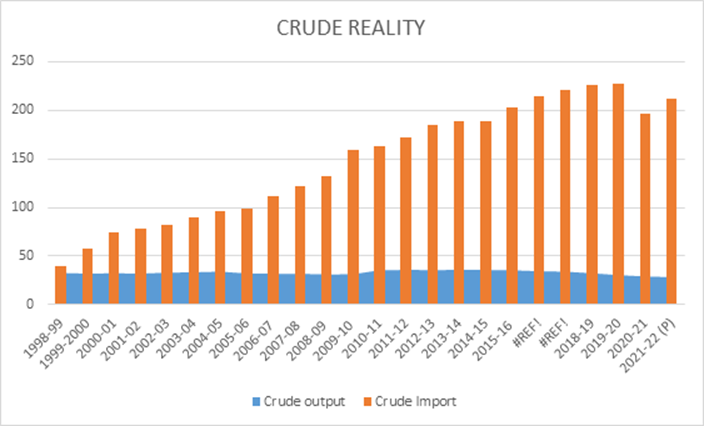 Source: Petroleum Planning & Analysis Cell, Ministry of Petro & Natural Gas
A look at the data reveals that while India’s oil imports have grown from 40 million tonnes in FY1999 to 211 million tonnes in FY2022, oil output is actually down from 32.8 million tonnes to 28.4 million tonnes.
It is not just oil production. Pricing of refined fuels for sale in the domestic market was supposed to have been freed up. That’s hardly the case with public sector oil marketing companies currently incurring huge under-recoveries.
The unviable prices of fuel in the domestic market has pushed private fuel retailers to cut sales volumes and find ways to support their distributors—it is almost like a privatization mess redux.
In fact, the unviable market is also what has nudged domestic refiners to explore exporting more refined products versus selling the fuelling locally at a significant loss—as no one is going to pay a hefty premium to a private retailer when a public sector fuel station is offering the same litre of diesel at a lower price.
The export ban now puts refiners in a piquant situation. They can either just shrink output, divert feedstock to produce non-fuel products (not that easily done) or simply sell the fuels at a loss and look to offset this with the now lesser profits on exports.
The regulatory flip-flop on a level playing field for private players in the oil & gas sector is also expected to hurt prospects of divestment in the sector. It is unlikely any strategic investor will want to buy Bharat Petroleum Corporation without having any certainty of what the future profitability and cash flows of the company could look like. The windfall cess and export tax could very well be the final nail in the veritable coffin for divestments of state-owned entities in the oil & gas sector.
The investors' woes
For shareholders of oil & gas sector stocks, the pronouncements of Friday would hardly be music to the ears—ONGC ended the day down 13 percent and Reliance Industries lost 7 percent. While Reliance, with its diversified revenue streams, will likely pull through this taxing period without any significant dent, the oil producers (ONGC, Oil India, HOEC and Vedanta’s Cairn Energy) will see a significant direct hit to their bottomlines.
But the bigger issue is the loss of opportunity for investors to ride the oil trend. While Warren Buffett increases his bets on energy, Indians have little option to play the oil theme via investments in domestic stocks. Their only route to play the oil theme now is to invest in stocks listed overseas—as investing in oil versus oil companies is less rewarding.
A study of the Brent oil price trend and ONGC’s share price since 2000 reveals a strong correlation of 0.76, but the 20-year CAGR of Brent at 7.4 percent lags that of ONGC at 11.4 percent. 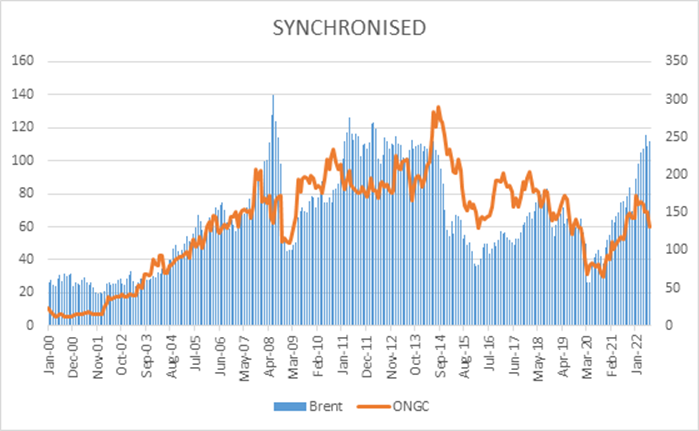 Start thinking Exxon, Total, BP or Saudi Aramco for your portfolio if you want to bet on oil, as investing in the Indian oil & gas sector is like walking in a minefield of regulatory surprises.
Check out our in-depth Market Coverage, Business News & get real-time Stock Market Updates on CNBC-TV18. Also, Watch our channels CNBC-TV18, CNBC Awaaz and CNBC Bajar Live on-the-go!