Amid volatility in equities, gold could remain preferred asset for investors in 2020

Amid increased uncertainties in the equity markets due to the US-China trade war and volatile crude prices, investors may continue to prefer safe-haven gold, which has advanced 20 percent so far in 2019. Market analysts expect gold prices to stay on the upward trajectory for some time. The prices of gold moved up 20 percent since January 2019 to the date.

Amit Sajeja, analyst, Motilal Oswal, said that the current support level at Rs Rs 36,000 is strong and the prices may rally to up to Rs 40,000 in the next three-four months. 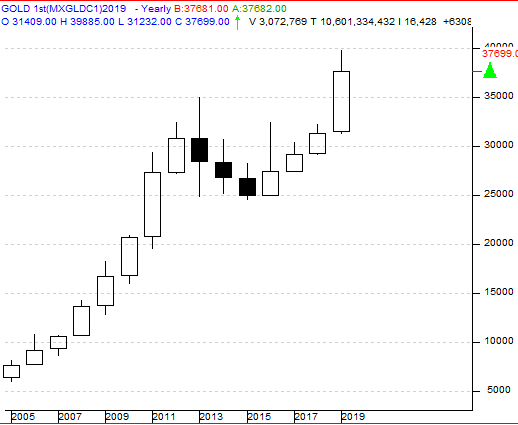 Sajeja said, “There are still plenty of uncertainties from the global economic perspective. Even if Brexit is sorted out, the trade war is still on. Besides that, global manufacturing is at six-seven year lows even in developed economies like the US, Germany and the UK. Also, economic growth as indicated by GDP is slowing down.  This will keep gold supported at lower levels. Besides Central Bank buying of gold has increased in the last few years. As far as levels are concerned, $1,440 -1,420 zone is an important support area and I don't expect spot gold to fall below that.”

Sanjeev Das, a consultant trainer and technical analyst at BSE Institute Ltd, New Delhi, was of the opinion that trend was bearish for gold. He said that the spot gold was trading in the range between $1,445 and $1,485. If it falls below $1,445 level then the next support level will be at $1,375.
Tags Commodities gold Gold Prices Stock market