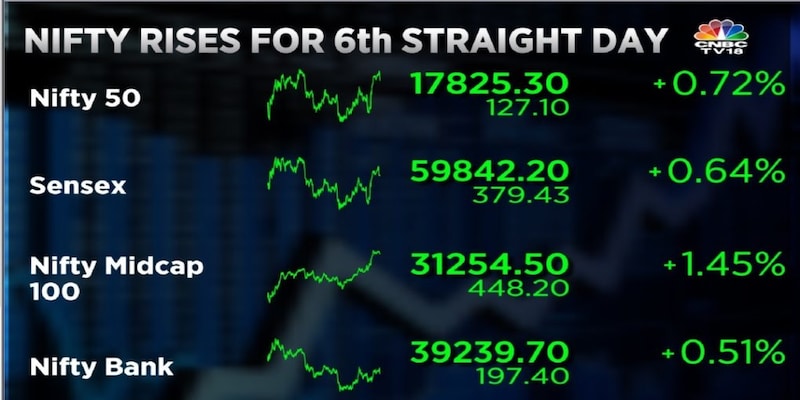 Closing bell: After a long weekend, Indian benchmark indices ended Tuesday's session on a positive note with the market gaining for sixth straight session to close at an over four-month high. Today's uptrend in Nifty50 was led by financials and automobile stocks. Nifty50 ended at 17,825.25, up 0.7 percent while Sensex closed 0.6 percent higher at 59842.21.

After a long weekend, Indian benchmark indices ended Tuesday's session on a positive note, with the market gaining for the sixth straight session to close at an over four-month high. “I think investors have been pleasantly surprised by this rally. If we go back 30-40 days... everyone was bearish, and there were fears that oil will go to $150-175 per barrel because of shortages from Russia. So, the worst-case scenario didn't play out on oil,” said Rahul Chadha, Chief Investment Officer at Mirae Asset Global Investments.
“What we have seen is a good set of results. A mix of low investor positioning and the worst case not playing out, strong earnings led to what we see now,” he said, adding expectations from here on would be still cautious.
Elsewhere, gold extended losses on Tuesday after posting its biggest drop in a month in the previous session, as a stronger dollar dented bullion's appeal, while investors watched for signs of further policy tightening by the US Federal Reserve.
Spot gold fell 0.2 percent to $1,775.30 per ounce after falling more than 1 percent on Monday. US gold futures dropped 0.4 percent to $1,790.20.
Stock Reactions
Rakesh Jhunjhunwala’s favourite stock Titan Company (Titan) ended about a percent higher. This was the first trading day for the scrip after the Big Bull of Dalal Street passed away on Sunday morning in Mumbai at age 62.
Also Read | Remembering Rakesh Jhunjhunwala | A look at the cream of the legendary investor's portfolio
Hero MotoCorp stock price settled 2 percent higher after the two-wheeler firm's strong Q1FY23 results further improved the sentiment in the auto stock ahead of the festive season, and inflationary and supply side woes seemed to ease.
Muthoot Finance shares plunged over 12 percent after the quarterly results of India's largest gold loan firm fell short of Street expectations, as higher costs dented its revenue.
Global markets
MSCI’s broadest gauge of Asia Pacific shares outside Japan was down 0.1 percent, while key European indices were higher.
They grappled with worries over global growth following weak Chinese and US economic data that knocked oil prices and commodity-linked currencies. The dollar briefly hit a one-week high as investors piled back into the safe-haven currency while the Aussie, euro and Chinese yuan buckled.
S&P futures were down 0.2 percent hinting at a lower start for the US equities.
(With inputs from agencies)
Catch up all stock market highlights of August 16 session here.
Check out our in-depth Market Coverage, Business News & get real-time Stock Market Updates on CNBC-TV18. Also, Watch our channels CNBC-TV18, CNBC Awaaz and CNBC Bajar Live on-the-go!