Budget 2020: Nifty was unable to hold gains post-budget in 4 out of 5 previous years

Updated : February 01, 2020 08:01 AM IST
The years 2015, 2017 and 2018 were the best years for the Indian bourses before the Union ]budget, however, the gains weren't sustained by the markets afterward.
Nifty delivered highest returns a month before the Union Budget in the past five years in 2017, where Nifty rose 6.5 percent in the month preceding the budget.

Union budgets have always had a direct impact on the equity markets. However, recently the impact has seen a gradual decline. According to the data from the last five years, the benchmarks have witnessed tremendous volatility on the budget day but ended up settling on a rangebound note.

In 2020 as well the Nifty50 index has remained net flat since the start of January, while mid- and small-caps have seen some outperformance. Major experts expect the budget to revolve around tweaks in personal income tax, long-term capital gains (LTCG) tax, and import duties, etc.

Market reactions to budget announcements since 2015 suggest that except for any major tax shocks, markets have largely been range-bound. As per brokerages, no major surprise announcement is expected in Budget 2020 as well and markets will likely remain range-bound.

Despite the declining impact, pre-budget expectations still play an important role in determining how the market performs after the budget. In four of the past five budgets, the month post the budget has underperformed the month preceding it. The years 2015, 2017 and 2018 were the best years for the Indian bourses before the Union ]budget, however, the gains weren't sustained by the markets afterward. 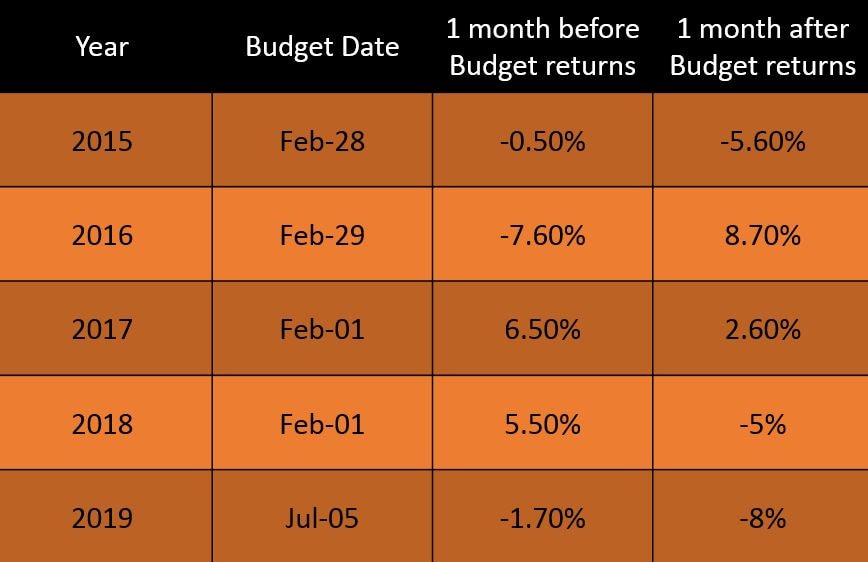 Similarly in 2018, Nifty added 5.5 percent (between January 1 and February 1), however, the benchmark declined 5 percent in the month after the budget (between February 1 and March 1).

In 2019, when the Budget was announced on July 5, the Nifty fell 1.7 percent from June 4-July 5, however, post-budget the index extended losses to decline 8 percent.

In 2015 as well the index slipped 0.5 percent ahead of the budget, but it further widened losses to fall 5.6 percent in the following month.

Two thousand sixteen was the only year when the Nifty outperformed in the month following the budget. It fell 7.6 percent in the month leading up to the budget and rose 8.7 percent post the event.

The focus of the 2020 Union budget is likely to be mainly on the economy’s revival making additional efforts to revive growth, investment, and consumption.

"A larger rally will be in the offing in 2020. Hopefully, the budget will do its best to revive the economy, but there is no guarantee that markets will react the same way as expected given the various mood swings of the bourses. Nonetheless, Indians should remain invested for a bigger bull run ahead from a long term perspective," Jimeet Modi, founder, and CEO at SAMCO Securities told CNBC-TV18.com.
Tags budget 2020 Finance Ministry Indian Markets Markets nifty Nirmala Sitharaman stock markets