Nifty50 crosses 17,800 for first time in 4 months as market makes a gap-up start

Nifty50 crosses 17,800 for first time in 4 months as market makes a gap-up start 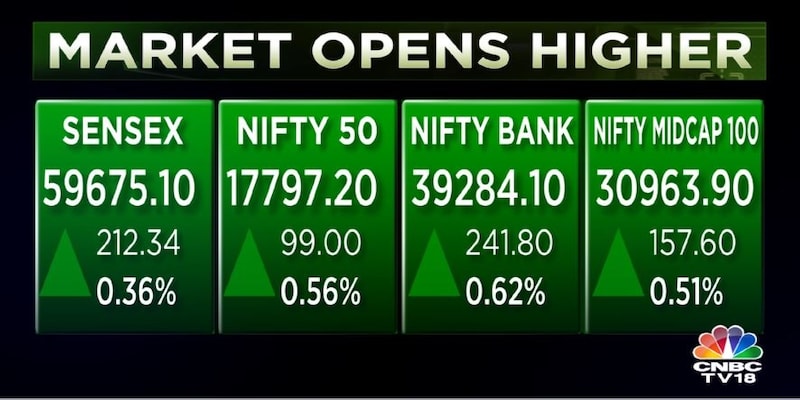 The Sensex and the Nifty50 built on to opening gains on Tuesday, as Dalal Street returned to trade after a long weekend, led by gains in financial, IT, auto and oil & gas shares.

Indian equity benchmarks started yet another holiday-truncated week on a strong note on Tuesday, as Dalal Street resumed trading, backed by gains in financial, IT, auto and oil & gas shares. Losses in metal stocks, however, played spoilsport, limiting the upside for both headline indices.

The Sensex and the Nifty50 rose as much as 0.7 percent each in the first few minutes of trade. The 30-scrip index gained 441 points to touch 59,903.8 at the strongest level of the day so far.
The Nifty climbed to as high as 17,820.6, up 122.5 points from its previous close — crossing the 17,800 mark in intraday trade for the first time since April 5.
A total of 42 stocks in the Nifty50 basket rose at the open. Divi's, Mahindra & Mahindra, Hero MotoCorp, HCL Tech and Coal India were the top gainers in the 50-strong universe. Asian Paints, Tech Mahindra, Infosys, Tata Steel and Apollo Hospitals — rising around one percent each — were also among the top blue-chip gainers.
On the other hand, Sun Pharma, Hindalco and Titan — declining around half a percent each — were among the top laggards.
Reliance, the HDFC twins, ICICI Bank, Infosys and Asian Paints were the biggest contributors to the gain in both main indices. "The surprise rate cut in China when the rest of the world is hiking rates is an indication of a sharp growth slowdown in the country, triggered by widespread COVID lockdowns and woes of the property market," said VK Vijayakumar, Chief Investment Strategist at Geojit Financial Services.
China's central bank lowered the key lending rates to revive demand as data showed the economy unexpectedly slowing in July. The move came as s surprise to the markets as investors have been grappling with how much further central banks in the US and Europe would hike rates when they meet next month.
"With other BRICS economies like Brazil and South Africa struggling and Russia's economy expected to contract, India stands out with an expected growth rate of 7.2 percent in 2022-23 ( the year ending March 2023)," Vijayakumar added.
Overall market breadth favoured the bulls, as 1,922 stocks rose and 1,259 fell on BSE.

Global markets
Equities in other Asian markets barely made it to the green amid lacklustre trade, following overnight gains on Wall street. MSCI's broadest index of Asia Pacific shares outside Japan held up 0.2 percent at the last count.
China's Shanghai Composite was up 0.3 percent, but Japan's Nikkei 225 and Hong Kong's Hang Seng flat.
S&P 500 futures edged down 0.1 percent. On Monday, the three main US indices finished a choppy session higher amid optimism the Fed can achieve a soft landing for the world's largest economy.
The S&P 500, the Dow Jones and the Nasdaq Composite ended 0.4-0.6 percent higher.
Check out our in-depth Market Coverage, Business News & get real-time Stock Market Updates on CNBC-TV18. Also, Watch our channels CNBC-TV18, CNBC Awaaz and CNBC Bajar Live on-the-go!