Bottomline: Where the market’s headed, maybe

Updated : January 10, 2021 06:29 PM IST
Empirical evidence adds greater conviction to bull-run theories, the one catch is whether the data interpretation is right.
Foreign money is flowing into emerging markets, this time not seeking higher economic growth (though that too), but also to offset any debasement in dollar value.

I said the Nifty is headed for 21,000 would you bite? Every market player—trader, investor or money manager—has a theory that drives her or his actions. Today, the most bandied about theorem is: “this is like 2003-04”. What if it is? We’ll get to that in a bit. Let’s first bust the other myth.

IT ISN’T DIFFERENT THIS TIME

Remember, for every buyer out there, there’s a seller. My observation over the years, so far as Indian equities go, is that Life Insurance Corporation of India, is the smartest contrarian in the business—they buy when everyone else is selling, and sell when most are buying. In a way, the life insurance behemoth’s actions refute the “this time it’s different” theory more strongly than anything else. So, if anyone is giving you that, you know who you have on your side. The one thing that works in the market every time, is to buy cheap, sell pricey.

If you study the behaviour of the Nifty over the past over 20 years, you’ll observe that the index tends to move up in waves beginning with sharp up-moves and ending with sharp declines. You can look at the behaviour from 2003 to 2008 or even from 2016 to 2020. Each one is a block of 4-5 years. Now the big question here is: was the Covid induced slump an aberration? If so, one could argue the trend that began in 2016 could be nearing its send. On the other hand, if it was complete, the next 4-5 years could see a sustained uptrend that could see the index scale greater heights with small corrections along the way. 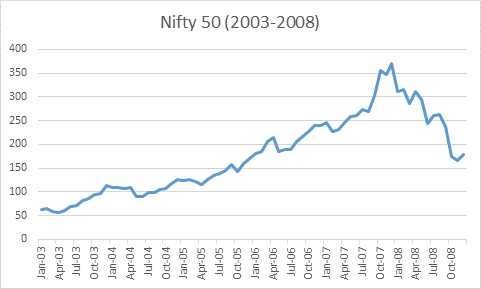 So, why are most money managers betting it’s the latter? First, valuations were inexpensive at the start and there are signs several sectors in India could finally be emerging from a long period of unsatisfactory growth, induced in many sectors by regulatory changes. So, will earnings growth address the valuation concern and lead the market still higher.

If you heard the commentary from the TCS management, that’s one sector that’s more likely to see acceleration than deceleration in earnings going forward. But let’s take a look at the trend in the 2003-2008 run.

Interestingly, during this period, while the price to book value expanded, the price-to-earnings remained fairly stable in the first three years. And only when the earnings failed to match up—leading to a sharp expansion in PEs—did the correction start.

In fact, the price-to-book value ratio had scaled to well over 5x during that run-up. Even if we assume the discounting this time tops out at 4x, there’s a near 44% upside—implying a Nifty target of 20,000-21,000—over the next 3-4 years.

So, should you start buying more shares? Perhaps not. This may be a time for a pause, given the sharp run-up in stock prices in a very short time. Besides, after the initial surge, gains over the remaining years of a wave tend to be more gradual. So you’ll likely get a dip. But since you can’t time markets, it is best to opt for a SIP strategy—letting rupee-cost averaging do the work for you.

That liquidity has been driving gains in asset classes is now part of the lexicon of even the less initiated. But let’s understand this equation in its simplest form. Foreign money is flowing into emerging markets, this time not seeking higher economic growth (though that too), but also to offset any debasement in dollar value—that’s also why Bitcoin has been surging. So, in a way, there’s a bet against the historic trend of steady rupee depreciation against the dollar—which required foreign investors to earn enough returns after accounting for dollar depreciation in the past. This time the bet is on gains from a dollar depreciation as well, enhancing the attractiveness for Emerging Market equities. What this can also mean is that dollar returns could be better than rupee returns this time around—the Nifty has consistently outperformed the Nifty USD in the past due to the exchange effect.

That’s what’s going for inflows. What’s going against it, is the possibility of a pull-back in liquidity and rising bond yields in the US. The US 10-year rate has topped 1% despite another stimulus expectation from the newly elected Democrats and despite the Federal Reserve reiterating its easy-money stance. The move by RBI to introduce its Liquidity Management Framework, which it had kept in abeyance due to Covid, could also be a harbinger of a tightening of stance going forward. In a press release issued on Friday, the central bank said: “On a review of evolving liquidity and financial conditions, it has been decided to restore normal liquidity management operations in a phased manner.”

The big question here is: can the Federal Reserve change its stance? There’s nothing in the rule book that says it can’t. And that’s a big risk. Remember, you also have a new team in charge of finances and treasury operations in the US now. So, anything is possible.

Thus keeping an eye on how this plays out and how the US $ moves will be key for the markets future buoyancy. And if you track the S&P500, that should give you a good enough cue—note, the USD Nifty and S&P500 have mirrored each other for years—for when the turn comes, it’s going to be Ring-a-ring-a-roses. So, what am I placing my bets on? Given the multiplicity of fundamental and technical factors to consider, I find myself leaning towards a good few years ahead for the markets. However, the recent sharp run-up in stock prices suggests a need for pause. And if this is a 3-4 year cycle, I’d wait before throwing money in at these levels. There is time.