Explained: Rising bond yields and the reason behind it

Explained: Rising bond yields and the reason behind it Government bond prices fell to three month low with yields on the 10-year benchmark bond hit 6% on Friday after the Reserve Bank of India (RBI) hinted of prolonged pause in the interest rate cut due to high retail inflation.

Government bond prices fell to three month low today with yields on the 10-year benchmark bond hitting 6 percent on Friday after the Reserve Bank of India (RBI) hinted that it may not cut interest rates further anytime soon because of high consumer inflation.

Since the outbreak of coronavirus and its subsequent impact on the economy and government finances, bond prices and yields have been fluctuating. Over the past one year, the yield curve--which shows the relation between the different interest rates across different tenures--has steepened drastically. Massive liquidity infusion by the RBI in the form of Targeted Longer-Term Refinancing Operations (TLTRO) has brought down short term interest rates.
How have bond prices been moving?
Since mid-April, bond prices had been rallying as yields dropped. The yields on the 10-year benchmark bond, which were trading around 6.2 percent in March, rallied to a high of 6.5 percent in mid-April and fell drastically to 5.7 percent in July.
However, on Thursday, yields rose back above 6 percent after the Reserve Bank of India (RBI) hinted of prolonged pause in the interest rate cut cycle. 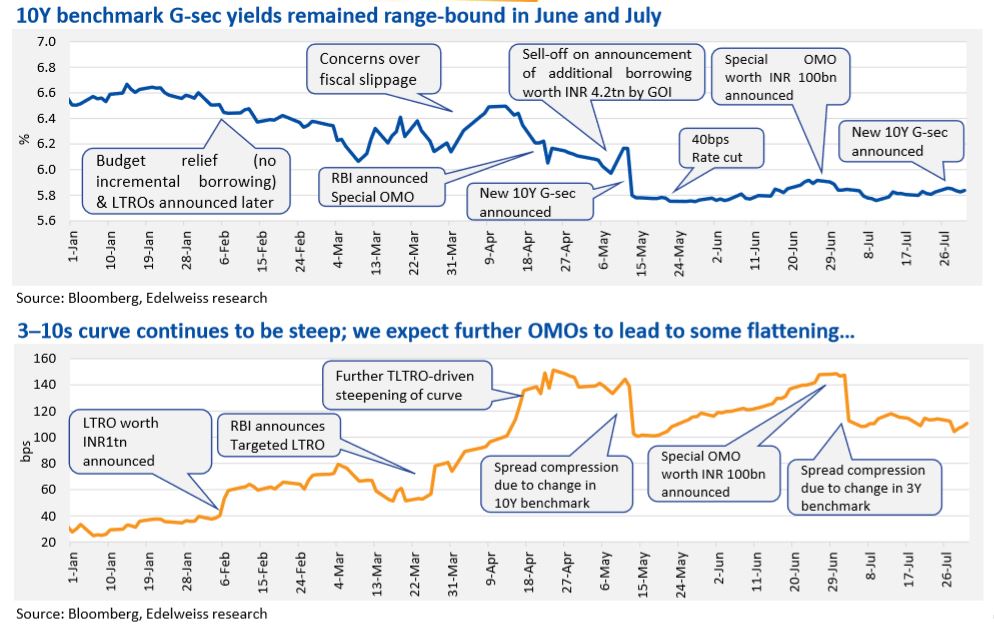 What is the relation between bond prices and yields ?
Bond price and yields are inversely related, meaning bond prices fall when yields rise and vice-versa
The minutes of the RBI’s Monetary Policy Committee (MPC) meeting for the August policy highlighted concerns about inflation. If interest rates are cut when inflation is rising, cheap money could further stoke inflation.
The consumer price index-linked (CPI) inflation for July was 6.9 percent as against 6.23 percent in June.
In March, as coronavirus began to spread rapidly, investors fled equities and other risk assets and sought refuge in bonds, driving up the prices of bonds. RBI's unprecedented rate cuts and liquidity operations to boost India’s growth also supported the bond price rally, causing yields on 10-year government debt to fall to 5.74 percent.
“However, the lockdown and supply constraints have given rise to India’s inflation data, which is hovering above the higher band of 6 percent. The increasing inflation has made RBI uncomfortable and the minutes hinted that the central bank may not cut repo rate at least the inflation trajectory comes into the target range. Also, there are no signals of OMO (open market operations) in the market,” said Rahul Gupta, Head Of Research - Currency - ‎Emkay Global Financial Services.
What do high yields signify?
Simply put, high bond yields indicate that the cost of borrowing money has risen. This affects smaller companies more than bigger companies, since smaller companies have limited avenues to raise funds.
Global trend
The US 10-year Treasury yields declined after Federal Reserve’s decision to hold interest rates steady in its policy meeting on July 29 and its comments were in line with the market expectations.
The JPY 10-year yields have remained fairly stable as the base itself is low and the 10-year benchmark trades at -0.1 percent
The Euro 10-year bond yields declined after the ECB maintained status quo on its key rates in its policy meeting on 16th July.
Check out our in-depth Market Coverage, Business News & get real-time Stock Market Updates on CNBC-TV18. Also, Watch our channels CNBC-TV18, CNBC Awaaz and CNBC Bajar Live on-the-go!