The benchmark Nifty has already lost over one-third of its value from its highest daily closing level of 12,352 recorded on 14 January 2020.

The past two months have been the most horrific period for investors in financial markets since the two months period of September-October 2008. A colossal destruction of investors' wealth has already taken place.

The sentiment on the street looks eerily similar to the one we saw during H2FY09, post-collapse of Lehman Brothers. In those days, the rumors of large banks declaring bankruptcy, sovereign defaults, imminent EU breakup, market freeze, sounded absolutely believable. These were not only market grapevines believed by the common investors. Many senior analysts at global investment banks wrote scary reports about these eventualities. Globally reputable, economists and strategists painted doomsday scenario of global economy slithering into a deep abyss to compete with the great depression post-First World War.
In India, many depositors transferred money from private banks to public sector banks. Investors summoned their advisers for details of their liquid fund portfolios. The fixed maturity plans (FMPs) backed by bank CDs were pre redeemed by paying penalties. Capital protected structured products were also called prematurely by incurring material losses.
These days, there is a popular tendency to liken the current situation to the 2009 panic sell-off. Many global investment gurus believe that going by the reactions of central banks in the developed world, it appears to be already worse than in 2009.
In my view — (a) Indian equities are definitely and firmly in a bear market; (b) the price correction till now is much lower than 2008-09, implying that there is scope for further erosion in equity prices; and (c) the process of bottom formation in the benchmark indices may have already started.
Indian equities firmly in bear market
As a thumb rule, a 20 percent fall in the benchmark indices is considered as the beginning of the bull market. The benchmark Nifty has already lost over one-third of its value from its highest daily closing level of 12,352 recorded on 14 January 2020. The fall in the broader Nifty500 index has also been very similar. The Nifty Midcap100 index has fallen about 38 percent in this period. A frightening 97 percent of the stocks traded on NSE have yielded negative returns since Nifty recorded its all-time high closing in January 2020. The gauge of fear (Volatility Index) has surged over 600 percent, after hitting the highest levels since 2009.
In comparison, Nifty has corrected about 60 percent in 10 months from its closing high of 6287 recorded on January 8, 2008, to the low of 2553 recorded on November 20, 2008. After a brief corrective rally, this low level was retested on March 9, 2009, from where a sustained rally occurred.
2008-09 correction was much deeper and wider
The price correction in 2008-09 was deeper and wider as compared to the present fall. More than 99 percent of stocks yielded negative returns during January-November 2008.
The July 2006-March 2009 market cycle ended with deep cuts in equity values. BSE Smallcap index ended the cycle with a net loss of 41 percent from its beginning value and 80 percent from January 2008 value. BSE Midcap Index lost 36 percent from its beginning value and 75 percent from January 2008 value. Sensex lost 18 percent from its beginning value and 60 percent from January 2008 value.
In comparison, the cut in equity values is much smaller in the present cycle. The current market cycle started at the end of February 2016. As of yesterday, the Sensex was higher by 28 percent from the start date. BSE Smallcap was the same BSE Midcap was higher by 10 percent. From their cycle high levels Sensex is down by around 30 percent, BSE Midcap is down by 40 percent and BSE Smallcap is down by 50 percent.
Obviously the current fall in nowhere closer to 2008-09 fall. However, it is not necessary that equity prices shall decline materially from the current levels to complete the market cycle. The current market has been much flatter in trajectory. In this cycle, Sensex gained around 80 percent from its beginning level as compared to 106 percent in the previous cycle. The smallcap gained 100 percent from the beginning level against 187 percent rise seen during the previous cycle. The midcaps gained 85 percent from their beginning level whereas in the previous cycle these had gained 150 percent.

The fall from the peak values could therefore accordingly be lower in the present cycle
Market bottoming process has already begun
The following three indicators indicate that the market bottoming process may already have started.
1. The market cycle ends are usually marked by the benchmark indices recording a lower annual average as compared to the previous year. This trend has been seen in 1998, 2001-02, 2008-09 and 2016.
2020 YTD average of 10874 is lower than the 2019 average of 11,456, and there is no sign that the 2020 average could be higher than in 2019.
It is, however, worth noting that when the bigger global market cycles (2001-02 and 2008-09) end, the Nifty average has declined for two consecutive years, while the end of smaller cycles has been marked by one year of negative growth in Nifty average. Since we are marking the end of a bigger global market cycle, we may see the correction extending to a larger period so that the 2021 average could also be lower than 2020. 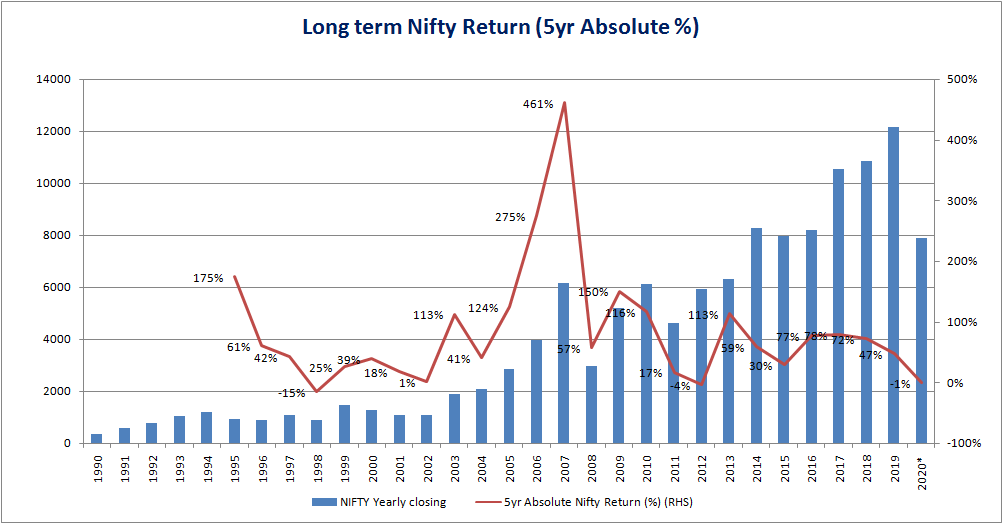 It is pertinent to note that the 2006-2009 market cycle recorded a peak 5-year Nifty absolute return of 461 percent in 2007. In the present cycle, the peak long term return has topped at 72 percent in 2017. This may be interpreted to mean two things — (i) the equity returns in India have fallen structurally lower; and/or (ii) the fall in this cycle may not be as dramatic as it was in 2008-09. 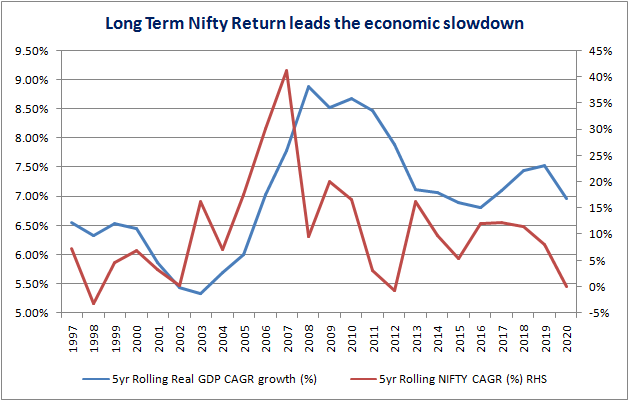 3. Historically Long term Nifty returns (5-year rolling CAGR) have led the GDP trend in India. The 5-year CAGR turning negative has usually led to GDP growth bottoming in the next 2-3years. As we are anticipating 5-year NIFTY CAGR turning negative by the end of 2020, it is likely that GDP growth may bottom sometime in FY22 and a sustained recovery may be seen thereafter.
Conclusion
To conclude I may say the following:
1. Indian equities are firmly in a bear market. This bear market may last anywhere between 9-21 months.
2. We may see a further decline in equity values in the following months. However, the decline may not be as deeper as it was in 2009.
3. The bounce-back may not be as sharp as it was seen in 2010-11. We may see a gradual recovery as the GDP growth and earnings begin to pick up from FY22.
Vijay Kumar Gaba explores the treasure you know as India, and shares his experiences and observations about social, economic and cultural events and conditions. He contributes his pennies to the society as Director, Equal India Foundation. The views are personal.
Check out our in-depth Market Coverage, Business News & get real-time Stock Market Updates on CNBC-TV18. Also, Watch our channels CNBC-TV18, CNBC Awaaz and CNBC Bajar Live on-the-go!