Are you ready for a recap of the Harshad Mehta Bull Run?

The melt-up we had talked about last year (September-20) looks to be finally around the corner and after a brief period of consolidation from February to May 2021, the markets look ready for a near-vertical take-off.

The breadth of markets looks extremely strong. Index heavyweight Reliance has woken up from slumber and the Nifty is once again making new all-time highs as the strongest bull market in history continues to climb the wall of worry.

The fears around the deadly second wave and inflation have been left behind. In our view, it is perhaps the “bull market of the century”.

Despite the drumbeat of bubble warnings, stocks continue to rise relentlessly as the market refuses to believe in everything that's going wrong and focuses only on what could go right.

Our initial understanding of the market was that, in an era of ultra-low interest rates, the bubble mania will be limited to the technology, financial and consumer sectors. However, the last few months of price action highlights that the risk-on rally in a world awash with liquidity is sweeping sectors one by one.

Chemicals, infrastructure, and most recently Housing Finance Companies (HFCs) have also joined the party. Therefore, we now expect that the gigantic bubble will include all sectors within the economy.

Yes, there will be intermittent corrections, but they will most likely be short-lived and a lot of small and mid-caps (a few large caps too!) will easily double/triple over the next few months. The returns could be much higher if you go down the quality ladder.

The market is definitely expensive, but then, the Fed is certainly not tightening anytime soon. Amidst abundant liquidity, the markets are just discounting the long-term growth potential in the Indian economy - much beyond COVID-19, and that too at a ferocious pace.

Some pockets of the market (Kotak Bank, Bajaj Finance, Asian Paints etc.) are already factoring in India as a $5 trillion economy. Others that have been lagging thus far are catching up rapidly.

The frenzy is truly global across all global markets and asset classes. Much has already been talked about the US-listed AMC Entertainment and Gamestop, which have shot up 10-15 times in the last 6 months.

Indian markets have also started to participate in recent weeks. The latest case in point being PNB Housing, which has doubled in a matter of 6-7 days!

Melt-up is just getting started

We are in the last stage of this economic cycle (that started in 2009) and therefore expect the bubble to accelerate at a very steep pace from hereon.

Our initial target for the Nifty remains unchanged at 20,000 - which we expect to see around September 2021. The targets could well overshoot depending on the exuberance in the stock markets.

To our understanding, the markets are discounting the long-term growth potential (10-12 years) of the Indian economy. And if that truly happens to be the case, there exists a chance the Nifty might even touch 22,000 or even 24,000 in the next 6 months.

The much talked about Harshad Mehta Bull run of 1992 was actually a melt-up and it also happened during the 1991 economic crisis. Back then, India was facing an acute balance of payments crisis. The market initially corrected 35 percent during the crisis, but was able to recover in a short period.

In early 1992, the market went through a period of brief consolidation (4-6 months) with gradual up moves. The melt-up came around March 1992, 13-14 months after the bottom was made. Similar patterns have emerged in other market melt-ups. 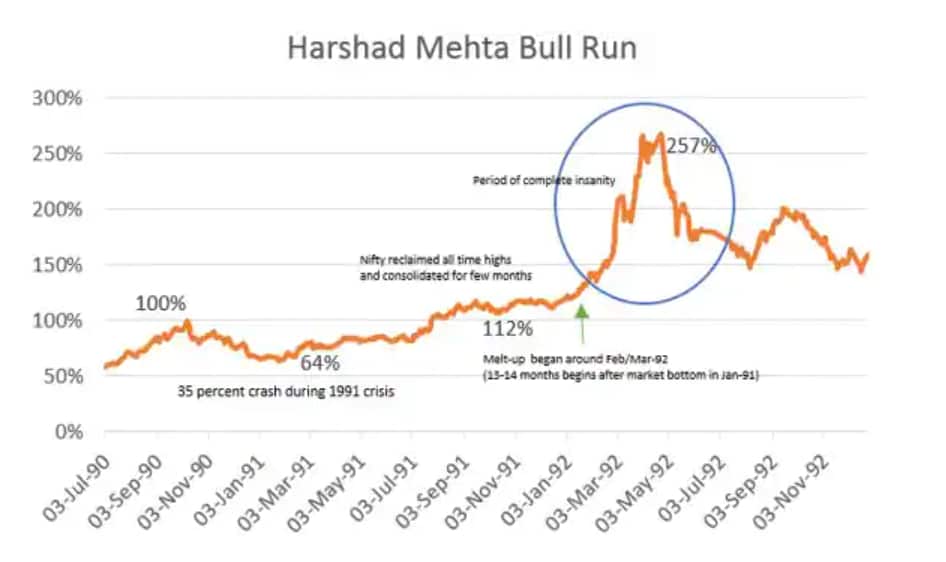 The behaviour of the market and the condition of the economy looks very similar to 1991-92. The COVID-19 crash of 35 percent has once again been followed by new all-time highs and the market is currently going through a phase of upward consolidation. The melt-up is the next stage! 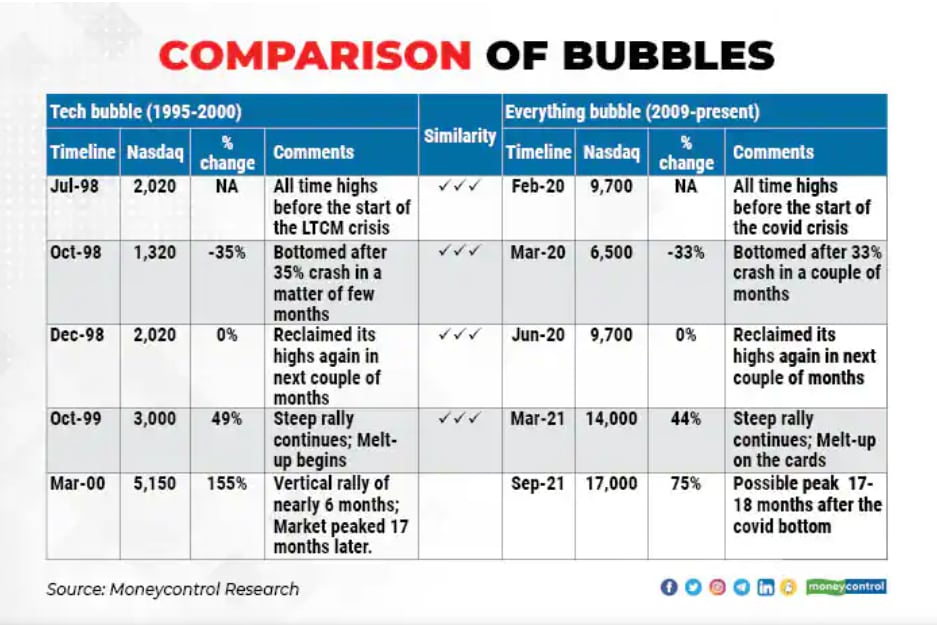 How long will the melt-up last?

Melt-up is a sudden, persistent rise in the price of a security or market, often due to herding investor behaviour. Such events are a very unique and rare, which typically happen towards the end of the economic cycle.

Earlier bubbles have been largely restricted to one sector (tech Bubble of 2000, housing bubble of 2007), but this one is unique, as the euphoria is widespread across all sectors.

In fact, there have been very few melt-ups in history and such phases of extreme greed in the market tend to ignore all the bad news coming their way and tend to last between 4-7 months. Back in 2015, when the Chinese economy was struggling with growth challenges, familiar signs of extreme euphoria emerged and the Shanghai index shot up from 3,000 to over 5,000 between February and June 2015.

During the global commodity boom, Indian indices too experienced a mini parabolic melt-up in late 2007 when the index soared 40 percent from October 2007 to January 2008, eventually plunging during the global financial crisis.

“The mother of all bull markets is just ahead.” Rakesh Jhunjhunwala, India’s Warren Buffett or the Big Bull, has been repeating for a very long time. We think that time has finally arrived and the markets will surprise even the most bullish punters on Dalal Street.

The next 6-7 months appear extremely exciting from a market standpoint and will most likely find a permanent place in the history books. As the melt-up has just started, we advise investors to remain aggressive to take maximum advantage of this truly manic Bull Run. Ray Dalio’s famous quote “Cash is Trash” seems just about perfect at this point of time.

The lure of easy money will suck everyone in, so remember to overcome your greed and plan your exits as the ongoing boom in commodities and the stock market will inevitably force central banks to prick “the everything bubble” and trigger the worst ever recession of the century.
Disclaimer: Moneycontrol Research analysts do not hold positions in the companies discussed here.
Tags Market Outlook Markets nifty
Published : June 09, 2021 02:46 PM IST