A leather footwear maker's stock is up 4X in just one year. Should you step into this space now?

A leather footwear maker's stock is up 4X in just one year. Should you step into this space now? 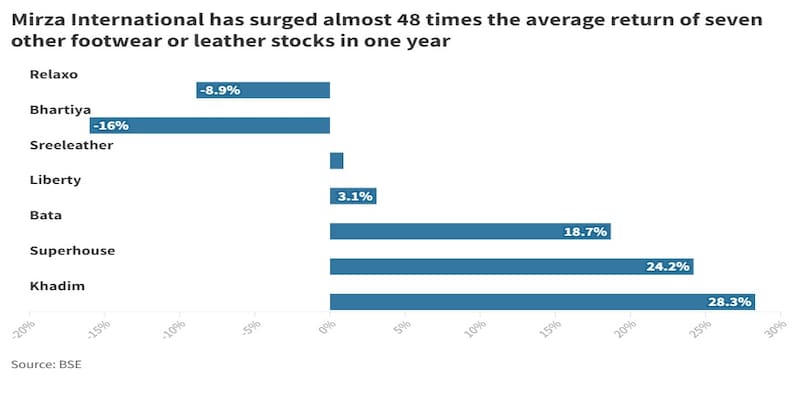 A footwear stock has showered investors with a return of more than four times. But does that mean it is a lucrative space given the overall correction on Dalal Street? Here's what experts make of Relaxo, Bata and other key players in the pocket now.

The maker of RedTape brand shoes has rewarded investors with a return of 343 percent in 12 months, a period in which though most footwear stocks have risen but not as much.

With sustained margin pressure in the footwear business thanks to higher input costs, are there any opportunities in the few listed stocks in the space?
Analysts believe bigger players are much better positioned than Mirza International despite their elevated valuations. Relaxo and Bata — the country's largest two companies by market value — are the most expensive from a price-to-earnings perspective (trailing twelve months). Analysts generally have a positive view on both, especially from a long-term perspective, though input costs appear to be hampering margins in the short term.
But they are divided on Mirza International.
Rahul Shah-Co-Head of Research at Equitymaster, is not sure if Mirza International can sustain its record earnings growth.
Also Read | Are sneakers the new stocks? Here is all you need to know and the dos and don'ts of this new asset class
"I don't like to pay a lot of premium for earnings growth that may come in the future. However, those who've studied the company closely and are confident of its growth prospects can perhaps stay invested," he told CNBCTV18.com.
Barring relatively newer listed companies Metro Brands and Campus Activewear — both stocks listed on BSE and NSE in 2022 itself, only two among the major footwear manufacturers have managed to cross pre-COVID annual sales. 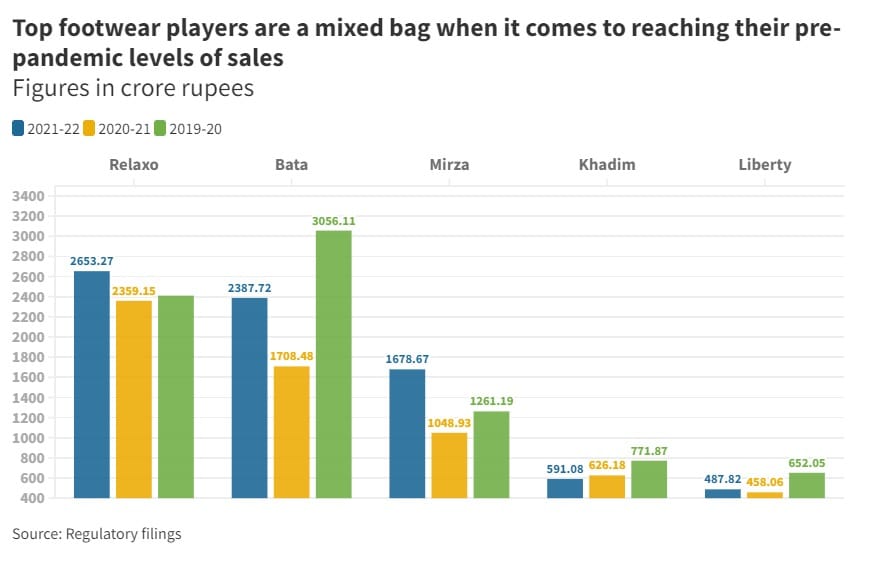 Archana Gude of IDBI Capital Markets likes Bata and Relaxo for their scale, reach and pan-India distribution.
"Relaxo is looking attractive after the recent fall, and the kind of expansion strategies that both companies have even though they don't compete with each other and their distinct focus is positive," Gude told CNBCTV18.com.
Relaxo focuses on mid-to-low segment whereas Bata aims at the mid-to-high segment, said Gude, who has a 'buy' call on both stocks.
She has a target price of Rs 1,206 for Relaxo (a 22.5 percent upside from the current market price) and Rs 2,181 for Bata (18.6 percent).
IDBI Capital doesn't have coverage on Mirza International.
ICICI Direct likes both Relaxo and Bata. It recommends a 'hold' on Relaxo and sees a target price of Rs 1,100 over 1 12-month period ending May 2023.
The brokerage remains structurally positive on Relaxo's business model given its strong brand salience in Tier II and III towns, and healthy balance sheet to weather the crisis. However, it is of the view that its premium valuation and near-term headwinds may cap the upside.
Also Read | India's banking sector recorded highest profit in last 26 quarters
ICICI Direct has a 'buy' call on Bata with a target price of Rs 2,360. Bata has a strong balance sheet, diversified branded product portfolio and pan-India network, which would enable sustained long-term profitable growth for the company, according to a report dated May 16.
So what makes Mirza special?
"Mirza International is definitely among the better managed companies in the footwear space. This can be gauged from the fact that in the year ended March 2021, when peers like Bata and Khadim posted losses in what can be called one of the most difficult years for the industry, Mirza ended up being profitable," Shah said. 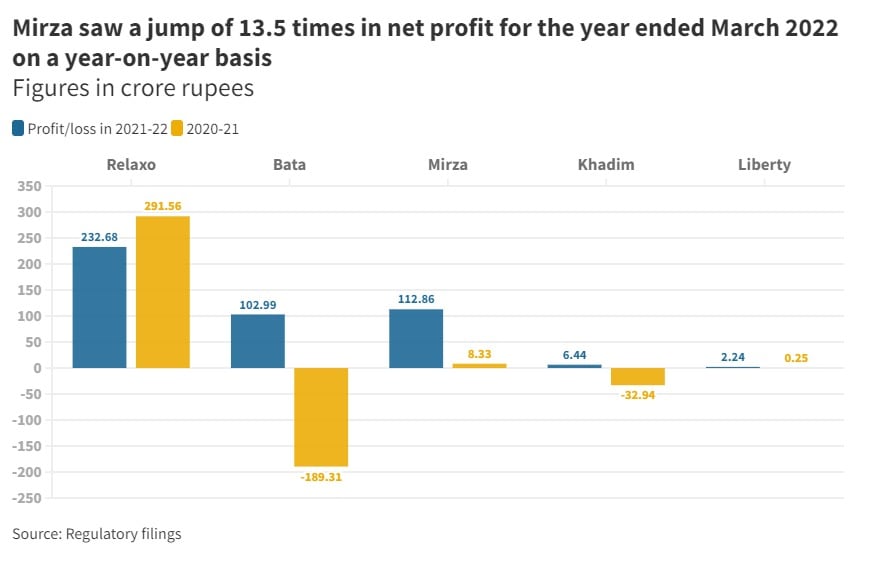 "The company has also done well to grow without incurring a lot of debt," he added.
The technical side is not so convinced. "Mirza seems to be the only exception and not sure why. Maybe there is some speculative element to it," Hemen Kapadia of KR Choksey told CNBCTV18.com.
He does not find footwear stocks promising, be it Relaxo, Khadim, Superhouse, Liberty or Bata. "Not tracking the stocks very closely but on pure technical parameters, Liberty looks like it has less to lose and nothing else looks particularly interesting as they are all in various phases of correction with the exception of Mirza," he said.
Also Read | Windfall tax explained — why ONGC, Oil India are spooked by it
Kapadia does not see "very many opportunities in the space or at least not at current levels", but he does feel that Relaxo is entering oversold territory and may give a bounce in the short term and "nothing much beyond that".
Optimists are banking on positive management commentary from newly-listed stocks Metro Brands and Campus Activewear, both of which are changing hands at a premium over the issue price despite a lukewarm start to 2022 in terms of IPOs following a bumper year. Campus Activewear and Metro shares are available at a premium of 16 percent each over the issue price. Campus's IPO is the best of the year so far with an overall subscription of nearly 52 times the shares on offer.