Are big fat Indian weddings back? Vendors rejoice as post-pandemic sales soar even as inflation pinches

The ultimate matchmaker, Sima Aunty in Netflix's Indian Matchmaking, believes that “efforts are meaningless if stars are not aligned”. With the vendor sentiment, it can be said that this wedding season, stars are indeed aligned well for the industry which is looking to get back on track after the setback due to the pandemic.

This November, the vibe of the country has changed — streets are witnessing the glamour of the band, baja and baraat as Wedding da Season is here!

Weddings may be said to be made in heaven, but their grandiosity and extravagance is made in India. This is evident from the fact that the Indian wedding industry is worth Rs 3.68 trillion, according to a 2016 report by KPMG titled 'Market Study of Online Matrimony and Marriage Services in India'.
According to an estimate by the Confederation of All India Traders (CAIT), over 32 lakh weddings will be solemnised between November 14 and December 14. The wedding market is expected to generate business worth Rs 3.75 lakh crore in this period. Last year, the estimate was at 25 lakh weddings.
“Couples whose weddings got postponed last year due to COVID-19 are tying the knot this year from November 2022-March 2023. This wedding season is seeing almost an increase of 20-30 percent in numbers of weddings happening, as compared to 2019,” said Parthip Thyagarajan, Co-founder and CEO, WeddingSutra.com
The wedding venue surge
Most vendors across sectors that CNBC-TV18.com talked to said they are booked, suggesting robust growth. “In the past year, the overall wedding business has dipped by almost 60 percent, but because the previous year’s weddings are rescheduled to happen now, 80 percent of the venues are booked in advance and we are looking at robust growth figures. We estimate a 25-30 percent rise in venue bookings this year,” said . Vikaas Gutgutia, MD and Founder, FNP Venues, FNP Weddings & Events.
He further added that FNP venues and weddings business will see more than a 100 percent growth this year.
Paritosh Ladhani, JMD, Sincere Developers which owns Taj Hotel & Convention Centre Agra, is expecting a growth of 20 percent in revenue in the segment. Meanwhile, due to a 3x boost in wedding enquiries, Damandeep Singh, General Manager, Karma Lakelands Gurgaon, expects to see a rise of 40 percent in revenue as compared to 2019.
Also read: Rajasthan wedding market sees a boom as 1.5 lakh marriages set to take place in November
Adding to that, although mid-November to mid-December is the peak for the wedding industry, the shenanigans go on through year.  "In terms of bookings in advance, they are made six months prior and for us this year, our wedding bookings have been almost 200 percent more than the pre-pandemic years,” said Gorav Arora, General Manager, Novotel, Mumbai - Juhu Beach.
Trend and spend
Vendors said that as per the weddings that have already happened this year, the guest lists in some cases have increased. The average wedding guest list is 250-500 people.
“From 400-500 guests on an average pre-COVID, it has now come down to 200-250. But the spending has not reduced as couples are focusing on the guest experience,” said Anam Zubair, Head of Marketing — WeddingWire India.
“As per our data this wedding season, large venues (250-300 guests) are in high demand. When it comes to spending, hosts have easily paid in the range of Rs 4,200-5,000 on average to hotels on double-sharing rooms. And Rs 550-1,200 are being charged by hotels for major meals (vegetarian),” said Munjal Thakkar, Managing Director, Promenade Hospitality. 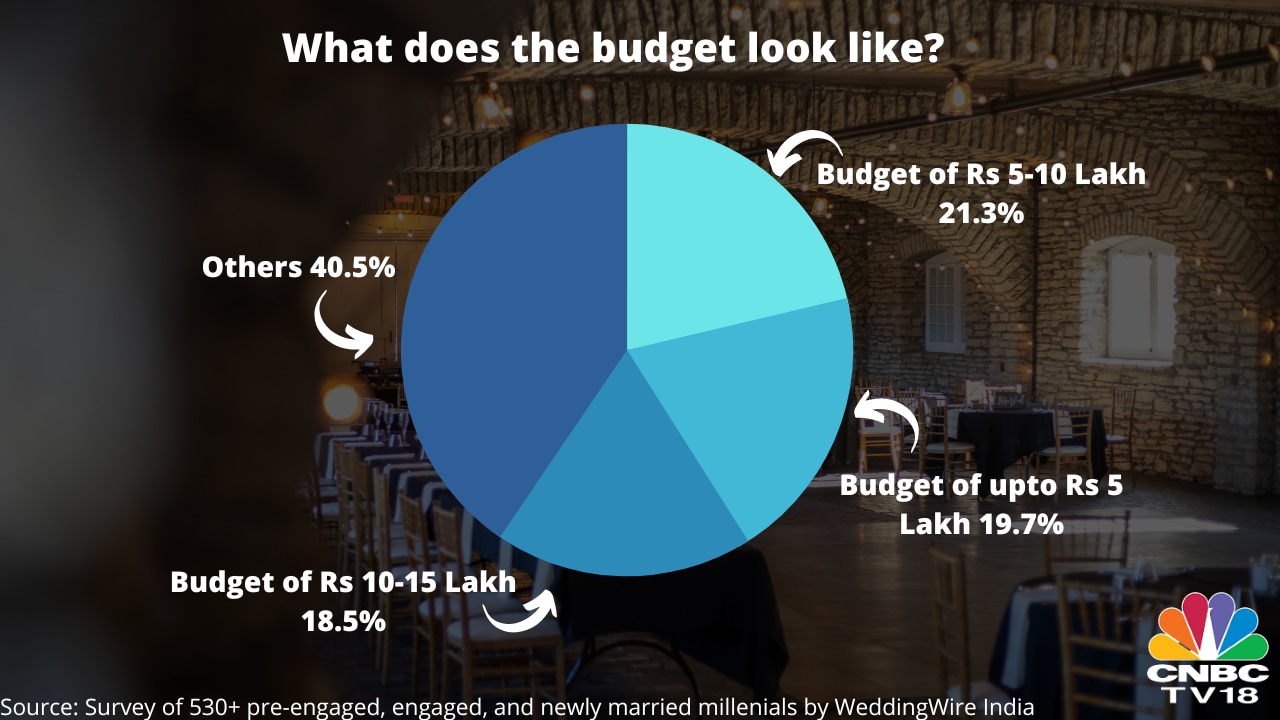 On destination wedding front, Mehak Sagar, Co-founder of WedMeGood. quoted data collected from their app from vendors and said 18 percent of the weddings that have happened this year are destination weddings. “Domestically, Jaipur Goa and Udaipur continue to dominate, but destinations like Puri, Pushkar and Mahabaleshwar have also joined the mix,” she added.
As per their data, people are looking for properties close to their hometowns.
“The preference for wedding locations that are within driving distance for the host family is the biggest difference we have noticed since COVID,” said Akarsh Mathur, General Manager, The Deltin, Daman. He also added that customers are increasingly concerned about cleanliness and favour lodgings with strict quality requirements.
Wedding planners and decoraters have been a bit hit in this section. Shruti Tiwari, Managing Director, VLW Global, a destination wedding planner in Goa, said the number of events this year have gone up by 20 percent but as the internal cost of labour, transport, and florals have shot up, the take-home revenues aren't crossing the 2019 level.
Also read: Expect weddings to be $0.5 trillion market in India over 10 years: Matrimony.com
On catering front, Sanjay Vazirani, CEO Foodlink F&B Holdings India, said that for premium catering demand, the price band is an average of Rs 5,000 per person in Tier 1 cities and Rs 3,000 per person in Tier 2 cities.
“In terms of trends, it has moved to shorter menus, Veganism, reducetarianism and flexitarianism is on the rise. Expecting a revenue growth of 25 percent for existing markets from 2019,” he added.
Inflation, although, is a big factor as he said procurement cost has increased, so margins have decreased.
According to Rupabh Sethi, co-owner of one of Delhi’s oldest and biggest sweet shops, Madan Lal Halwai, the average rate of mithai boxes this wedding season is from Rs 500-1,500.
“There is an overall 30 percent increase in total revenue as compared to 2019. However, owing to inflation, the profit margins have come down,” he added.
When it comes to wedding photography and videography, artists are overbooked primarily due to the weddings that were postponed and rescheduled.
“It can be said that at least for me, weddings have become bigger than before. I have filmed the most extravagant weddings this year. There’s been pent-up energy of sorts which I can feel,” said luxury wedding videographer and founder of The Wedding Filmer, Vishal Punjabi. This wedding season, he is already pre-booked and has had over 5,000 wedding queries for the month.
Also read: New high expected in hospitality due to festivities & long weekends
According to him, the company has seen about a 200 percent increase in bookings and 500 percent increase in enquiries as compared to pre-pandemic times.
Siddharth Goel, Co-founder, Camlition Productions, believes that the demand for a photographer in a wedding has increased a lot because everyone wants the perfect picture for the perfect moment. "We’re also seeing a trend of VR wedding shoots, or 360-degree wedding shoots,” added Goel.
All that glitters is not just gold
Jewellery shops this wedding season roo are very hopeful of surpassing the pre-pandemic sales.
“The sales percentage is expected to grow by around 20 percent this wedding season compared to 2019, thereby increasing the overall revenue share by around 10-15 percent,” said Rupesh Jain, Founder & CEO, Candere by Kalyan Jewellers.
Furthermore, he noted that people are moving away from traditional gold heavy jewellery in favor of fine diamond jewellery. Pink gold and white gold jewellery are becoming more popular than yellow gold.
Kalpnik Choksi, Director, Ishwarlal Harjivandas Jewellers, Ahmedabad, said that this year so far, they added about 27-30 percent to the annual revenue. In 2019, it was about 20 percent.
Urvish Soni, CTO, Yashoda Jewels, is expecting sales to add about 25 percent to the annual revenue as compared to 15-20 percent in 2019.
The ultimate matchmaker, Sima Aunty in Netflix's Indian Matchmaking, believes that “efforts are meaningless if stars are not aligned”. With the vendor sentiment, it can be said that this wedding season, stars are indeed aligned well for the industry which is looking to get back on track after the setback due to the pandemic.
Also read: Weddings and tourism: A growing matrimony in the Indian economy
Check out our in-depth Market Coverage, Business News & get real-time Stock Market Updates on CNBC-TV18. Also, Watch our channels CNBC-TV18, CNBC Awaaz and CNBC Bajar Live on-the-go!
Tags