One year of Section 377 verdict: A timeline of India's fight against the colonial era law

One year of Section 377 verdict: A timeline of India's fight against the colonial-era law

Last year, on September 6, Supreme Court, in a historic move for the LGBTQ (Lesbian, Gay, Bisexual, Transgender and Queer) community in India, struck down Section 377.

With the judgement, India joined the group of 26 countries that have legalised gay sex, paving a normal way of life for the LGBTQ community.
Chief justice Dipak Misra, while announcing the judgement, had said that the LGBTQ community has the same fundamental rights as others and that the identity of an individual is very important.
In a socially conservative India, gay sex was considered a taboo by several and was punishable by up to 10 years in jail.
The LGBTQ community, activists, lawyers and others across India welcomed the move that came after consistent efforts for years.
It was a tremendous team effort, there were a lot of other lawyers who also appeared for the cause, Arvind Datar, counsel for one of the petitioners, had said while speaking to CNBC-TV18.
"What we were able to demonstrate is that Section 377 was drafted in 1860 and has a history going back to the 15-16th century where sodomian homosexuality was taken to be as completely unacceptable and that is why the section uses the word carnal sex intercourse against the order of nature,” Datar had said.
Here is a timeline of India's fight against Section 377:
1861: Section 377 introduced by British India.
1994: One of the earliest efforts to decriminalise homosexuality by AIDS Bhedbhav Virodhi Andolan.
2001: Naz Foundation challenges the section's constitutionality, files a petition in Delhi HC.
2003: Delhi HC dismisses the petition.
2009: Delhi HC decriminalises homosexuality; calls Section 377 violation of Articles 14, 15, 21 of Constitution.
2012: SC upholds Section 377, reversing the verdict.
2015: Shashi Tharoor introduces private member's bill to decriminalise homosexuality; Lok Sabha quashes it.
2016: Five LGBTQ activists move SC.
2018: SC begins hearing; strikes down Section 377. 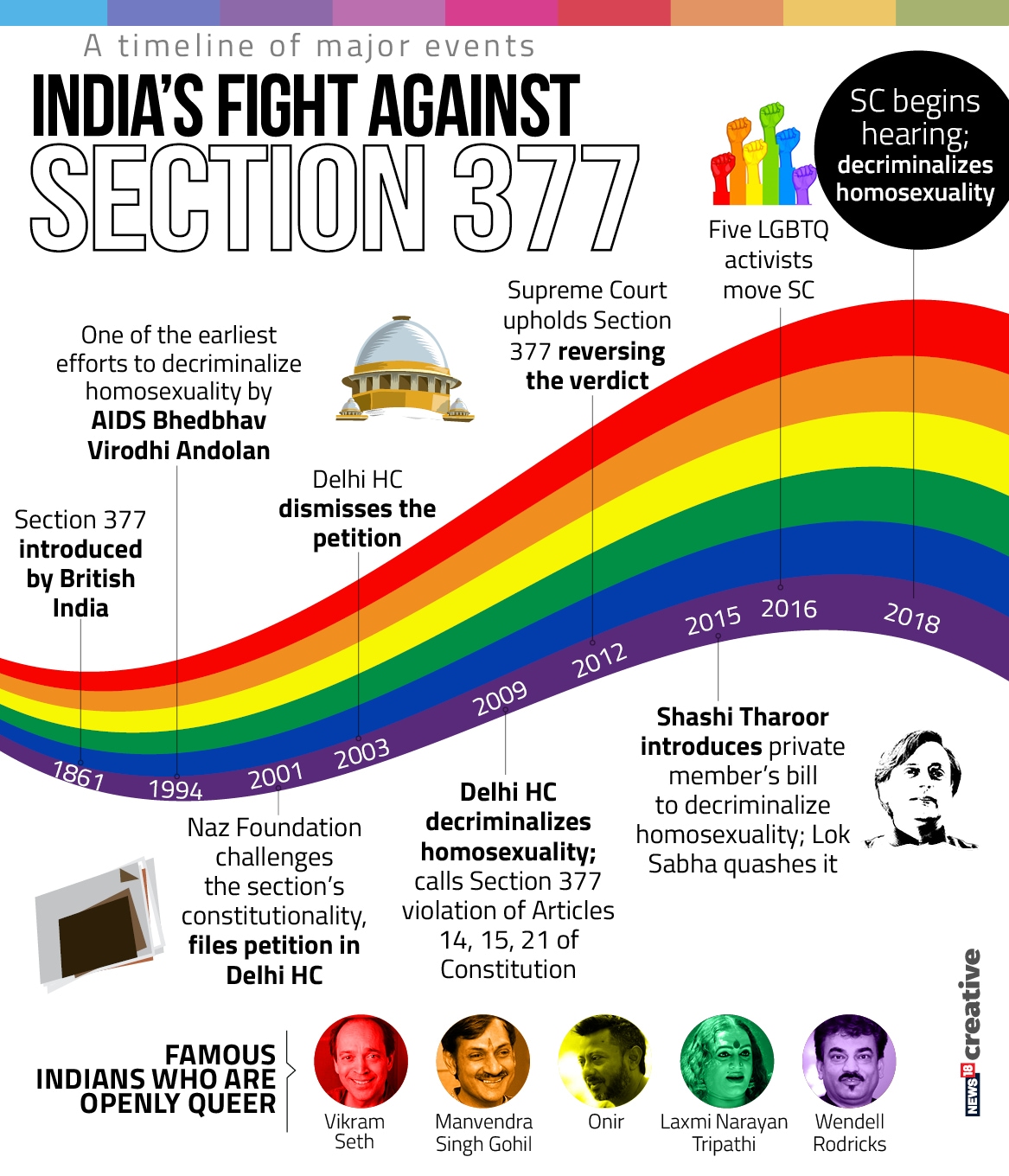