Updated : January 03, 2020 07:27 AM IST
Cyrus Mistry, the scion of the wealthy Shapoorji Pallonji family that owns a minority stake in Tata Sons, has been locked in a legal feud with Tata Sons and Tata family patriach Ratan Tata after he was removed as chairman in October 2016.
Cyrus Mistry had accused the Tatas of mismanagement and oppression of minority shareholder interests.

The National Company Law Appellate Tribunal (NCLAT) on December 18 restored Cyrus Mistry as executive chairman of Tata Group and ruled that the appointment of N Chandrasekaran as executive chairman is illegal. A two-member NCLAT bench headed by Chairperson Justice S J Mukhopadhaya has stayed the operation of the order with respect to reinstatement for four weeks to allow the Tatas to appeal.

Setting aside a lower court order, the NCLAT also quashed the conversion of Tata Sons into a private company from a public firm.

Mistry, the scion of the wealthy Shapoorji Pallonji family that owns a minority stake in Tata Sons, has been locked in a legal feud with Tata Sons and Tata family patriach Ratan Tata after he was removed as chairman in October 2016.

Mistry accused the Tatas of mismanagement and oppression of minority shareholder interests. Tata denies the charges. 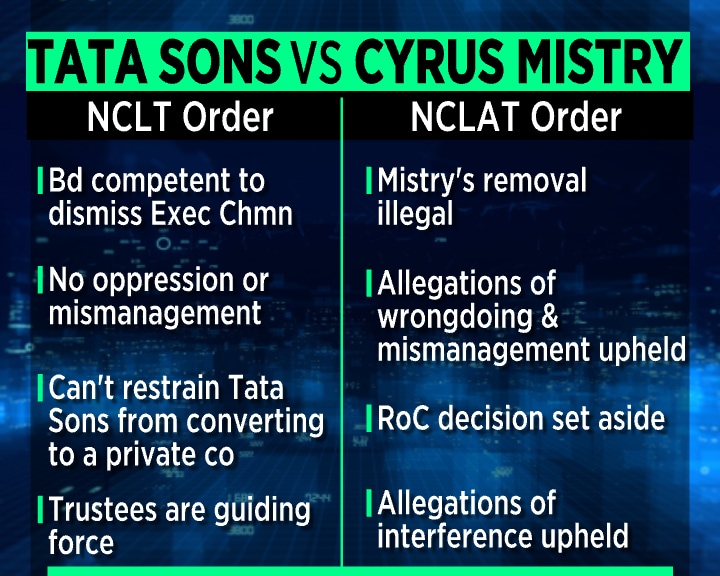 Ratan Tata heads the trusts that own a majority stake in Tata Sons. Mistry’s family firms own an 18.4 percent stake.

The National Company Law Tribunal had previously dismissed Mistry’s legal action on the grounds that such cases, brought by investors, require a minimum shareholding condition to be met. The NCLT had said Mistry did not meet this condition and declined his request for a waiver.

NCLAT, the appeals tribunal, ruled in September 2017 that a waiver ought to have been granted. Mistry had challenged the NCLT order before the NCLAT through his investment firms Cyrus Investment and Sterling Investment.

Following the judgement, Suhas Tuljapurkar, Managing Partner, Legasism, said, "A single isolated incidence such as removal of a director which is not in accordance with the manner prescribed under the law can constitute operation of the minority shareholder is settled law.”

"If the manner of removal of Mistry is held by NCLAT in appeal, then the matters have been adjudicated on the question of law and not on the merits. Merits can only be adjudicated by the NCLT and not by NCLAT. Therefore, my view is that in a single isolated incidence has resulted into oppression of a minority, then it will be ruled by NCLAT and obviously, they have ruled in favour of Mistry group," he added.
Tags Cyrus Mistry Cyrus Mistry vs Tatas NCLAT Ratan Tata Suhas Tuljapurkar Tata Sons