Julian Assange's father calls on Australia to bring him home

Julian Assange's father calls on Australia to bring him home 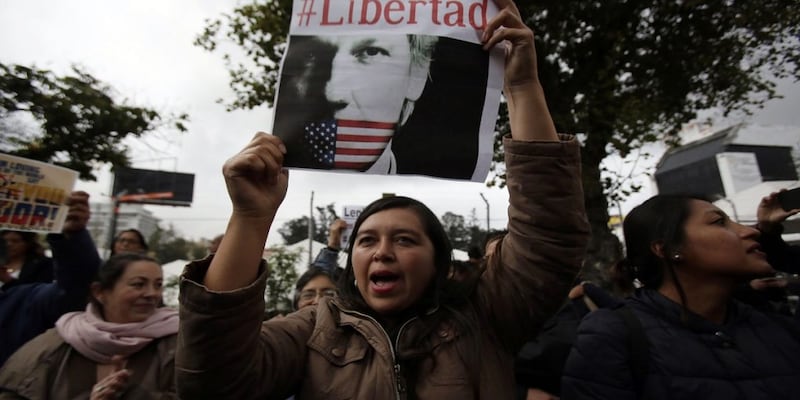 WikiLeaks founder Julian Assange's father on Sunday called on Australia to bring his son home, saying he was shocked to see his son's condition after his arrest in London last week.

John Shipton -- who was secretary of the Wikileaks Party when his son tried to run for a senate seat in 2013 national elections -- reportedly visited Assange every Christmas at the Ecuadore embassy in London after he sought refuge there in 2012.
"DFAT (Department of Foreign Affairs) and the prime minister should in a nuanced way do something," Shipton told Melbourne's Sunday Herald Sun.
"It can be resolved simply to the satisfaction of all. There has been some talk in a meeting between a senator and a senior DFAT official to extradite Julian to Australia."
Shipton said he was shocked to see the state of his son when he was arrested at the embassy on Thursday on allegations of skipping bail, and on a US extradition warrant related to a huge leak of official documents.
"I saw him, the way they dragged him down the steps, the coppers (police), he didn't look good. I'm 74 and I look better than him and he's 47. It's such a shock," he said.
"For months and months he has been living like a high-security prisoner, he can't even go to the toilet. There have been cameras watching his every move." Australian Prime Minister Scott Morrison said Friday that Assange would receive "no special treatment" from Canberra.
The 47-year-old Australian had sought refuge in the embassy while on bail awaiting extradition to Sweden to face charges of sexual assault and rape, which he always denied.
British lawmakers on Saturday urged their government to prioritise any extradition bid Sweden might make for him over the allegations.
Swedish prosecutors dropped a preliminary investigation into the rape allegation in 2017.
Check out our in-depth Market Coverage, Business News & get real-time Stock Market Updates on CNBC-TV18. Also, Watch our channels CNBC-TV18, CNBC Awaaz and CNBC Bajar Live on-the-go!