Updated : May 16, 2018 02:41 PM IST
The worst on-time performance was seen in the East Central Railway zone on May 14, where 59% of mail/express trains were delayed.
2017-18 has seen the best safety record of the Railways in decades: for the first time in 35 years, the number of accidents is in two digits.

By the end of this Monday, the Indian Railways reported a network wide punctuality of mail/express trains at just 61%.

This means, almost one in three trains was delayed that day.

If one was to compare this with the statistics for the same day last year, one would get a fair idea of how train punctuality is worsening: last year, same day on-time arrival was 78% for mail/express trains.

So, last year, only one in four trains were delayed, now every third train is running behind schedule.

In terms of absolute numbers, as many as 638 mail/express trains did not arrive on time on May 14 across the country, out of a total operation of 1,646 such trains.

The worst on-time performance was seen in the East Central Railway zone on May 14, where 59% of mail/express trains were delayed. This means not even one in two trains arrived on time.

The North Zone, which accounts for the bulk of train movement on the Indian Railways' network, had only 50% or half the mail/express trains arriving on time that day. So every second train was delayed.

It is obvious that the Indian Railways is slowing down, with trains increasingly arriving late and railway officials blame a spike in maintenance activities for delays.

The punctuality of trains appears to be worst in years. Enhanced maintenance works are crippling train timings as they either stop train operations at certain points to allow track renewal or require train speeds to be drastically reduced in some sections.

This year, in fact, the railways has been grappling with a peculiar binary: whether to prioritise safety related maintenance works or allow normal operations of trains by reducing block closures to avoid massive delays.

c As delays worsen, there are no easy answers to this question.

Indian Railways is the largest transporter of goods and passengers in India and increasing delays are a matter of grave concern.

Some more data shows how deep the punctuality problem has become. Latest numbers show 145 mail/express trains were delayed on Monday by – hold your breath – anywhere between 12-18 hours.

If we were to condone a half-hour delay, then almost 72% trains were on time – which means at least 18% of trains were still behind schedule.

And data gleaned from replies in Lok Sabha give an idea of how delays are plaguing not just the mail/express passenger trains but also the premium ones like Rajdhanis and Shatabdis. 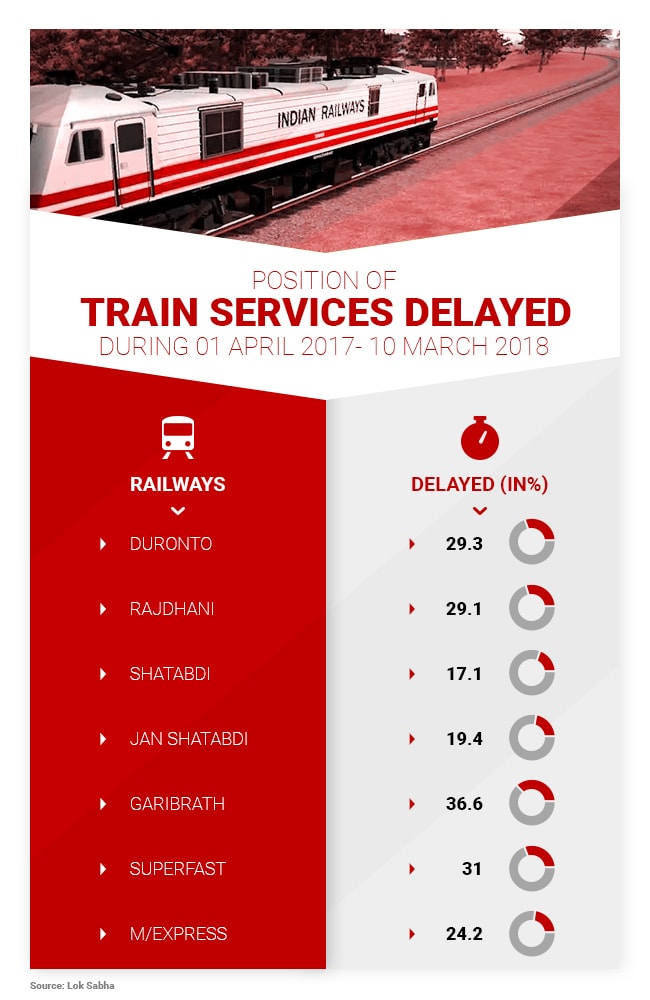 The reply shows how every third Rajdhani and every third Duronto was delayed between April 1, 2017 and March 10, 2018.

Every sixth Shatabdi and almost every fourth mail/express train was delayed too.

In fact, 451 mail/express trains were delayed every day during this period – as explained earlier, this number has jumped significantly to over 600 a day now.

These significant delays were reported even when trains arriving 15 minutes after their scheduled time were not included in the list.

Senior Railway officials say that "excessive" emphasis on maintenance activities has been a primary cause of such delays and unless a balance is struck between maintenance and punctuality, train delays would become the norm rather than exception.

Sample this: block hours, which refer to the time when no train movement is allowed on a section of the track to complete maintenance, jumped by almost by a fifth last fiscal and the target for maintenance remains at this level even for 2018-19.

Speed restrictions also more than doubled to 4,000 locations in 2017-18 compared to the previous fiscal and are targeted at the same level in 2018-19 too.

Officials say there needs to be a "balance" between safety and punctuality but obviously this is not an easy call.

Since 2014-15, the Indian Railways has grappled with deadly accidents and has been blamed for lax maintenance standards besides other lapses for these mishaps.

Goyal has been insistent on enhancing all maintenance and safety related works, leading to the present situation where delays are plaguing the network but ministry officials are helpless to tackle these in the face of increased maintenance activities.

As this piece says, 2017-18 has seen the best safety record of the Railways in decades: for the first time in 35 years, the number of accidents is in two digits.

Around this time last year, some of the worst accidents in recent times had dealt the image of the Railways a severe blow.

Just when the new fiscal started, however, there was a deadly accident at an unmanned level crossing in Uttar Pradesh with more than a dozen children dying as their school van crashed into an oncoming train.

This lead Goyal to announce a removal of all such unmanned crossings with the current fiscal when the earlier deadline was by 2020.

This also poses operational challenges, since removal of such crossings requires a section of the railway line to be closed for long stretches of hours each day.

Railway officials have indicated that there needs to be a "substantial" reduction in maintenance targets for train operations to normalise and become more punctual but this may not be what minister Goyal has in mind.

There is some relief in sight though: 400 km each of the Eastern and Western freight corridors should become available before the end of calendar 2018, which will shift some freight traffic away from the existing railways' network and ease up congestion.

It should also help improve train punctuality. Then, doubling of tracks is also being done at record speed to help ease congestion. But all in all, it is unlikely that India's trains will run on time just yet.
Tags Indian Railways Piyush Goyal Suresh Prabhu