Updated : July 03, 2020 06:37 AM IST
Once the financial bids are finalised by April 2021, the government expects private trains to operate in India from April 2023.
The total project for 151 trains is likely to invite investment to the tune of Rs 30,000 crore from the private sector.
Private trains will operate in 12 clusters including Bengaluru, Chandigarh, Jaipur, Delhi, Mumbai, Patna, Prayagraj, Secunderabad, Howrah and Chennai.

India is expected to witness its first private train by April 2023 on routes like Delhi-Patna and Howrah-Chennai, chairman of Railway Board Vinod Kumar Yadav told reporters in a virtual press conference.

Railways invited requests for qualification on July 1 for operating 151 modern trains on 109 route pairs. As per the ministry of railways, request for quotation

applicants are expected to be shortlisted for submitting financial bids by September and further, the financial bids are likely to be received by February-March.

Once the financial bids are finalised by April 2021, the government expects private trains to operate in India from April 2023, the ministry added. While the RFQ was ready to be floated in March, the process was delayed by few months due to COVID-19 situation, Yadav said.

Also read: Railways to expand 350 local trains in Mumbai from July 1, only essential services personnel to be allowed

It was finally decided to invite the RFQ now after assessing the resumption in economic activities and the timelines for allowing private trains have also been set anticipating that COVID-19 situation will stabilise by then, Yadav added.

The total project for 151 trains is likely to invite investment to the tune of Rs 30,000 crore from the private sector. However, as far as revenue sharing and profitability is concerned, railways expect that the partnership with private entities in operating 151 trains will certainly recover the basic minimum costs for operation.

"Railways will not make any loss in allowing private entities to operate these trains. We will recover our cost and the share of gross revenue will be decided as per bidding process," Yadav said.

It is important to note that railways incurred a loss of Rs 31,128 crore in 2017-18 on account of pricing of passenger fares below the cost of operations, according to government data. These losses stood at Rs 25,561 crore in 2016-17 and Rs 22,262 crore in 2015-16. Hence, subsidised fares have prevented railways from earning any profits in passenger train operations so far.

During 2017-18, Indian Railways recorded its worst operating ratio in 10 years at 98.44 percent, as per the latest report by the Comptroller and Auditor General.

Overall, these private trains will account for nearly 5 percent of India's entire rail network. There will also be a regulatory mechanism to ensure that private trains run as per established norms and protocol. 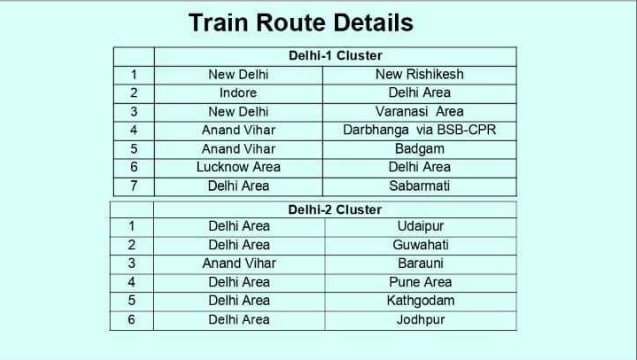 There will be a provision of penalty if private operator is not able to ensure 95 percent punctuality rate or if there is more than one failure per lakh km of travel.

The private entity will be responsible for financing, procurement, operations and maintenance of trains while the driver and guard of train will be from the government. Tests and trials will be conducted to validate rolling stock operations by railways research design and standards organisation.

Private trains will operate in 12 clusters including Bengaluru, Chandigarh, Jaipur, Delhi, Mumbai, Patna, Prayagraj, Secunderabad, Howrah and Chennai. The private trains will also feature in the upcoming new timetable of railways, which aims to increase speed and efficiency of passenger and goods trains.

So far, the ministry has already awarded contracts worth Rs 15,000 crore for increasing speed to 160 km per hour for Delhi-Mumbai and Delhi-Kolkata routes.
Tags COVID-19 Indian Railways private train