Railways is boosting its money from cargo. Here is why it’s good for you

Updated : May 25, 2018 02:19 PM IST
It is interesting to see that the efforts made to rationalise tariffs and myriad discounts have begun to bear fruit.
Almost half the freight transported across the Railways network is coal and in 2017-18, 22 million more coal was transported at 555 million tonnes (533 million tonnes in 2016-17).

In the first 10 days of May, the Indian Railways (IR) reported incremental gross earnings of Rs 205 crore by loading more freight. The Railways earned Rs 3,139.26 crore in this 10-day period against Rs 2,934.01 crore in the year ago period.

This may sound insignificant given the behemoth the IR is, but is actually pretty noteworthy. For one, the incremental earnings come right behind a stellar performance in April, when the Railways loaded the highest ever cargo across its network and earnings surged by over 12%.

For another, incremental freight loading month on month would be crucial for the country’s largest transporter in bridging the usual gap between earnings targets, which it sets out in the beginning of the fiscal year, and actual earnings. These incremental freight earnings will also help the Railways keep a check on the operating ratio. Specially since this is an election year and there is little chance of the government agreeing to any passenger fare hikes.

Freight earnings account for almost 65 paise of every rupee earned by the Railways and are used to subsidise passenger earnings, where the cost of transporting each passenger is double the earnings.

So, good news on the freight front is good news for the Railways’ overall finances in 2018-19. Between April and the first 10 days of May, then the Railways has earned almost Rs 780 crore more in terms of gross earnings on originating basis, than in the comparable period of last year at Rs 12,566.05 crore (Rs 11,787.59 crore).

The good news on the freight front actually began last fiscal itself, when the Railways reported 53 million incremental loading at 1162 million tonnes (1109 million tonnes in 2016-17). 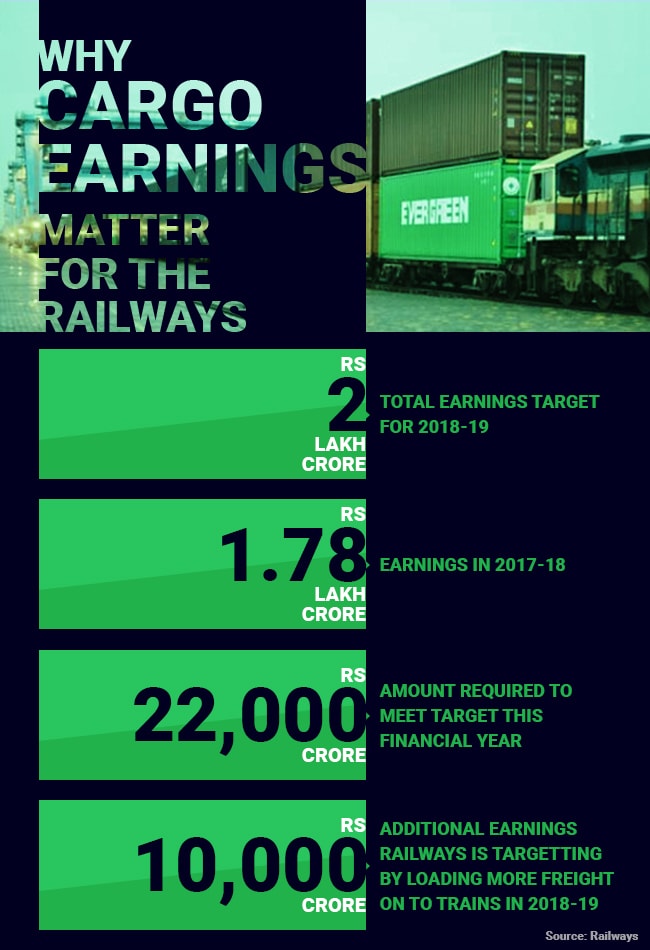 It is interesting to see that the efforts made to rationalise tariffs and myriad discounts have begun to bear fruit and continue to give Railways an advantage over roadways in the current fiscal too.

A senior official explained that the welcome rise in freight carriage and earnings has come after months of efforts to correct past mistakes where several policy initiatives have been taken. As a thumb rule, for goods to be transported up to about 450 km, roadways are more economical.

So, the use of Railways comes in only for longer distances. Over the last several years, a skewed tariff policy and some other issues pushed freight away from the Railways even though it had surplus capacity lying idle.

Here are some initiatives that helped fill up empty freight rakes for the Railways beginning last fiscal:

That Railways’ finances need a boost is evident from this: its total earnings target for 2018-19 is a steep Rs 2 lakh crore, up from about Rs 1.78 lakh crore achieved in 2017-18. This means it must generate an additional about Rs 22,000 crore this fiscal.

The Railways is eyeing about Rs 10,000 crore additional earnings by loading more freight on to trains in 2018-19 and all the above listed measures should help it push forward in this direction.

A senior Railways official had said earlier that another Rs 1,000 crore could come in through increased passenger loads. And in case the flexi fare scheme (which is applicable in select premium trains) is not touched, yet another Rs 1,000 crore could be earned from this scheme too in 2018-19. This still leaves a gaping Rs 10,000 crore shortfall in earnings versus the target. Anyway, the loss on account of passenger fares (railways’ social obligation cost) is about Rs 36,000 crore annually.

The Rs 10,000 crore earnings hole this fiscal could well be plugged if the Railways were to achieve land sale targets. IR has fast-tracked a project for vacant land monetisation, reported Financial Express.

The Rail Land Development Authority (RLDA) has identified 17 plots for leasing out and aims to generate Rs 6,000 crore as rentals over the next 8-10 years. Eight of these plots are in Chennai, five in Mumbai and two in Secunderabad.

IR’s total vacant land is estimated at a massive 47,300 hectares, but only a portion of this area can practically be used for commercial purposes, as 90% of it is linear land on the sides of tracks.