The cement sector, which was already impacted by the general economic slowdown, has now been severely hit by the COVID-19 pandemic-induced weakness in the industry.

The cement sector, which was already impacted by the general economic slowdown, has now been severely hit by the COVID-19 pandemic-induced weakness in the industry.

The cement production in the country is set to fall sharply by 25-30 percent during FY21 and capacity utilisation is likely to be around 40-45 percent. This will be the steepest ever fall in production and capacity utilisation that the industry has ever witnessed, according to a report by rating agency CARE Ratings.
"Cement production is usually closely in-line with demand which is also poised to fall sharply given the lockdown related restrictions present as the virus is showing no signs of abating. Even as the nation is under a unlock phase, the nationwide lockdown had come at the time when construction activities was at its peak and now with the monsoon season where again the construction activity gets stalled usually, the entire demand-supply dynamics for cement has gotten impacted," the CARE Ratings report said.
Analysts believe a partial recovery may bee seen in the sector October-November 2020 onwards post Diwali with the return of migrant labourers. Besides, normalisation of operations is expected January 2021 onwards.
However, till then, given the weakness in end-user demand due to the lack of activity in the housing and infrastructure sector, the cement industry is expected to remain in the red zone till September 2020 at least, till the end of the monsoon season.
Data shows that domestic cement production has fallen by 38.3 percent during Q1FY21 as compared with the 16.3 percent and 1 percent growth in production achieved during Q1FY19 and Q1FY20.
"Fall in demand for cement from housing and construction activities coupled with units operating at sub-par capacities along with staggered shifts has led to the fall in production. Onset of the monsoons also has impacted domestic output during Q1FY21," the agency said.
Due to the imposition of the nationwide lockdown, capacity utilisation of domestic manufacturers was around 40 percent during the quarter 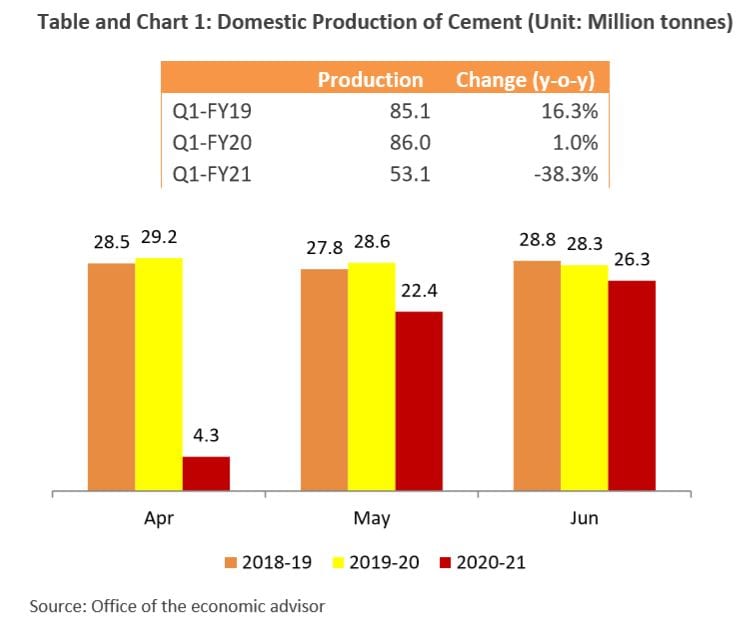 Cement demand was particularly tepid in metros/tier 1 cities as the number of infection cases kept increasing and the virus showed no signs of abating thus affecting construction work and limiting the need for cement. Even with the Centre relaxing rules for unlocking the economy, the industry has faced challenges with regard to state specific lockdowns, the report noted. Meanwhile, a sharp fall in the cement demand has led to the contraction of sales revenue for the cement companies during Q1FY21. However, due to various cost rationalisation measures and overhead controls undertaken by cement manufacturers, there has been an increase in the operating profit margins (OPM) and stability in the net profit margins (NPM).
The overall sales revenue has declined sharply by 33.3 percent during Q1FY21 as compared with the 12.1 percent growth rate achieved during Q1FY20, the report added.
Check out our in-depth Market Coverage, Business News & get real-time Stock Market Updates on CNBC-TV18. Also, Watch our channels CNBC-TV18, CNBC Awaaz and CNBC Bajar Live on-the-go!