Inside the world’s largest broadband connectivity plan: How Indian villages are securing access to basic services

Afsaana Baano lives in a village with a population of 2,093 people. The Nangal Bhaosingh village is located almost 200 km away from India’s capital city, New Delhi. The closest community health centre from the village is 7 km away and there is no direct public transportation. But this village has a common service centre (CSC) which uses the internet to connect villagers with doctors across the country.

And Baano, 10, dreams of reaching out to millions through the internet. “I want to become an e-doctor like the ones at the CSC. I will enquire about people’s problems and prescribe medicines to them,” she says. 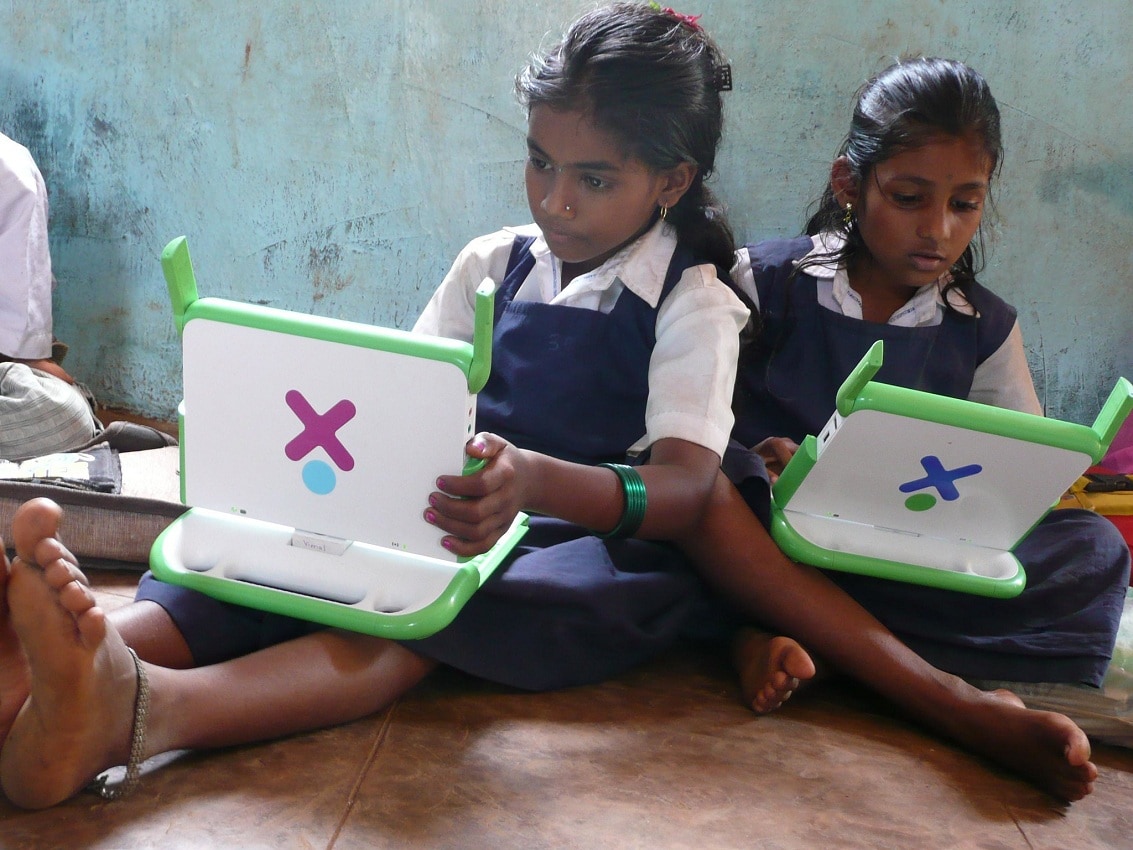 These laptops are created by Sundip Surve and last for 12 years. Hundreds of children have benefited from these simple laptops under the One Laptop Per Child (OLPC) project.

Baano is an example of people all over India who are using the CSCs to access services under the Digital India Mission. There are 3.66 lakh CSCs in the country that help citizens access various services including education, healthcare, veterinary care, and e-banking through the internet. Most Indian villages do not have easy access to these services and the internet can help bridge the urban-rural divide. The CSCs offer a great opportunity for rural citizens given that 2.95 lakh CSCs operate at the Gram Panchayat level. But the CSC’s success is marred by poor internet connectivity. The CSC’s impact is further limited by a general lack of education and clarity on what can be achieved through the internet.  Research shows that most of the Indian citizens access the internet through their mobile phones and use it to visit social media websites.

The Government of India has set an ambitious target of becoming a trillion-dollar digital economy by 2025. However, the true success of this mission will not depend on the economic footprint of the initiative, but on how well India is able to provide digital empowerment to her people. A recent report from industry body Assocham and consulting firm Deloitte highlights the need to increase the availability of digital infrastructure at rural and remote locations; improving digital literacy; creating awareness on the benefits of digital services; and providing incentives for greater participation from private players and start-ups.

Since the CSCs are the village-level touchpoint for digital service delivery, the success of the government’s Digital India Mission banks on the success of the CSCs. Thus, it is critical to build the necessary ecosystem around them. Ghanshyam Yadav, 25, is sitting in front of the computer and is typing in the visitors log data. He left a teaching job to run a CSC in Rajasthan. This village-level entrepreneur (VLE) provides online education and health services to citizens in Nangal Bhaosingh village under the Digital India Mission. He says, “I taught in a school for a year-and-a-half and realised that the school job was not stable. The school used to cut down on staff as soon as we completed the syllabus. The CSC provides job security.” He earns Rs 15,000 per month through the centre. “Internet connectivity used to be a problem but now we get internet from Bansur,” he says. The centre located less than 5 km away in Bansur tehsil deploys a private internet booster to ensure seamless connectivity. Giriraj Saini, 35, says, “We used to face many internet issues. Sometimes the websites didn’t open despite internet connectivity. We got a private company’s towers and boosters installed to strengthen the connection. We don’t face internet issues anymore.” Saini is now working with the government’s CSC department to create a Wi-Fi hub in his village.

A work in progress

Even though Saini was able to solve his area’s internet woes, pan-India seamless internet connectivity is still a work in progress. Only 50 percent of the Gram Panchayats in India have broadband connectivity.

Bharat Net is the world’s largest broadband connectivity plan and aims to connect 2.5 lakh Gram Panchayats. The initiative was originally launched in 2011 by the Congress-led UPA government and was named the National Optical Fibre Network Programme. It was later renamed as Bharat Net by the Modi government. The programme has missed several deadlines since its launch. According to the National Digital Communications Policy 2018, all Gram Panchayats will now get broadband connectivity by 2022.

According to EY and the Confederation of Indian Industry, the central government’s inability to secure right of way to lay the broadband fibre network has “created uncertainty in fibre investments across states.” On its part, the central government has written to state governments asking them to provide land for laying the broadband fibre. It has also expanded its budget to expedite the project. “A lump sum of Rs 20,431 crore (about $3 billion) has been allocated and disbursed from Universal Service Obligation Fund to Bharat Broadband Network Limited under Bharat Net project,” Prasad informed the Parliament in July 2019.

“Assumption that poor internet is affecting the success of Digital India is not borne out by any data…. The fact that CSCs, which work mostly in rural or semi-urban areas and depend on Internet for their business, have thrived both in terms of numbers, number of services provided and value of transactions done, shows that in most parts of the country quality of Internet is not an impediment in offering digital services. It is, however, true that with time the need for higher Internet speed is only growing as more and more Internet users are shifting to video-based content or real-time direct video-based interactive services. The government is aware about this changing demand for high-speed Internet and is working to provide high-speed optical fibre-based Internet in rural areas through one of the largest national broadband networks in the world called Bharat Net. NOFN was initiated in the year 2011 to provide OFC-based Internet in all the Gram Panchayats. However, till May, 2014, only 314 km of optical fibre was laid under this project. Renewed architecture of NOFN was called Bharat Net and focused approach towards execution after May, 2014 has led to laying down of 362,350 km of optical fibre till August, 2019 connecting 123,840 Gram Panchayats,” said the Ministries of Communication, Electronics and IT in a written note to www.cnbctv18.com.

Seamless internet connectivity alone will still not solve the larger issue at hand; lack of education and awareness, especially among older, rural women aggravates the situation. Seema, 40, who lives around 2 km away from Bansur says, “I don’t know how to use the computer. I don’t even know how to use the phone. I don’t use the internet at all.”

Many students at the CSC are the first in their families to use the computer. Arif Khan, 12, is standing next to his twin brother Asif. He looks shy yet proud when he says, “I know how to use the computer. I know typing, WinWord, painting, etc. No one in my family knows how to use a computer. My mother didn’t even go to school.” These children have high hopes from the digital revolution.

“Digital India aims to bridge the digital divide and bring about inclusive growth by using affordable technology leading to empowerment of citizens. Bridging digital divide implies bridging different types of digital divides namely urban-rural divide, gender divide, economic divide, etc. IT industry of India is a sector of economy that has the highest representation of women. Out of 4 million direct employment offered by IT-ITeS industry in India, nearly one third are women employees. Even in rural and semi urban areas 67,000 registered village-level entrepreneurs of the CSCs are women. Compared to only 13,000 registered village level entrepreneurs of CSC in 2014, there has been a significant growth in women entrepreneurs…. A special mention needs to be made about the significant participation of women employees at the Sri City electronics manufacturing area in Andhra Pradesh. More than 200 BPO units have been opened in tier 2 and tier 3 towns of India under the India BPO Promotion Scheme and North East BPO Promotion Scheme, where there is a significant participation of women employees. Under Pradhan Mantri Digital Saksharta Abhiyan (PMGDISHA), out of the total number of 2.64 crore adults registered for digital literacy training, 1.33 crore are women, 1.30 crore are men and 353 are transgenders. Performance of women who underwent digital literacy training and successfully cleared it to get certification is far better than men -- 77.68 lakh women have got certification as against 69 lakh men under PMGDISHA,” said the Ministry of Electronics and IT in a written note to www.CNBC-TV18.com.

“The government has undertaken the world's largest digital literacy programme called the Pradhan Mantri Digital Saksharta Abhiyan, which aims to make six crore rural adults digitally literate. This programme has been aimed to enable citizens of India to avail benefits of digital services by overcoming any disability arising out of lack of knowledge about using smart phones, computer, Internet etc. So far 2.64 crore rural adults have registered under this programme…. People like milkmen, vegetable vendors, meat sellers, shopkeepers, cab drivers, artisans, singers, etc. have used various digital products to enhance their business or showcase their arts and skills to the world using Internet, defying the assumption that adoption of digital technology necessarily requires high educational qualifications,” the note added.

As India strives to become a global digital super-power, it is critical for the government to continue to build on its multi-pronged approach to the Digital India Mission. One where it invests heavily to scale up the necessary infrastructure and create an enabling environment that fosters learning, which is conducive for bridging the digital divide between the digital haves and have-nots.