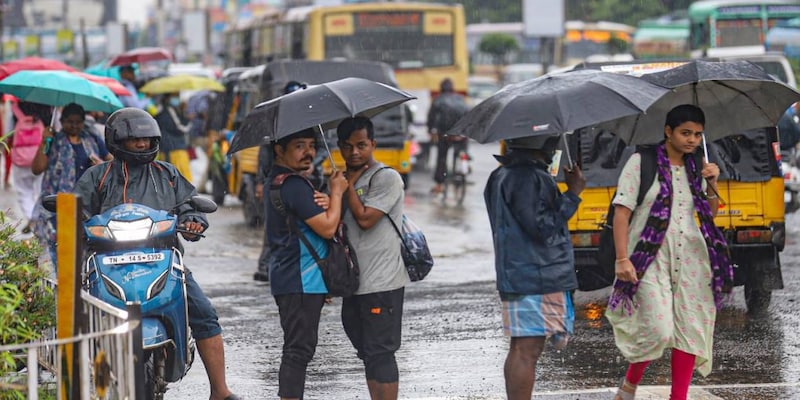 Heavy rainfall is likely to occur over north coastal Tamil Nadu-Puducherry, south coastal Andhra Pradesh and Rayalaseema on Monday and Tuesday as depression formed over southwest Bay of Bengal.

The IMD issued a yellow alert across Tamil Nadu on Monday. Districts including Thiruppur, Sivagangai, Puducherry, Chengalpattu, Ranippettai and Kancheepuram are likely to witness heavy rainfall accompanied by thunderstorm and lighting.
Meanwhile, light rainfall are likely to occur at isolated places over Kerala and Andaman and Nicobar Islands. Jammu and Kashmir, and Ladakh might also witness light rainfall.
"Sea condition will be rough to very rough over Southwest and adjoining Westcentral Bay of Bengal and along and off Andhra Pradesh, Tamil Nadu, Puducherry, Sri Lanka coasts during 20th– 22nd November," the IMD said.

Depression over southwest Bay of Bengal, near latitude 11.9 N and longitude 84.2 E, about 450 km east-southeast of https://t.co/f16rthiXlA move west-northwestwards and weaken gradually into a WML while moving towards south AP and North TN-Puducherry coasts around 22nd morning.. pic.twitter.com/wUmuM5CXMa

The weather department also said minimum temperatures are likely to fall gradually by 2-3ﾟC over Northwest India during
next four-five days. However, no significant change in minimum temperatures are likely over Central India during next three days and fall by 2-3ﾟC thereafter.
Delhi records coldest morning of season so far
Delhi recorded its coldest morning of the season so far on Monday as the temperature fell to 8.9 degrees Celsius, while the air quality remained in the 'very poor' category.
Monday's temperature was lower than Saturday's minimum of 9 degrees Celsius, which was then the lowest for the season.
The air quality index (AQI) at 9.10 am on Monday was recorded at 316. An AQI between 201 and 300 is considered poor, 301 and 400 very poor, and 401 and 500 severe.
.
Check out our in-depth Market Coverage, Business News & get real-time Stock Market Updates on CNBC-TV18. Also, Watch our channels CNBC-TV18, CNBC Awaaz and CNBC Bajar Live on-the-go!