Schools shut in UP due to heavy rainfall, 27 dead — IMD issues warning in these states

Schools shut in UP due to heavy rainfall, 27 dead — IMD issues warning in these states Schools in several parts of Uttar Pradesh were also shut on Monday in the wake of heavy rainfall warnings. Also, as many as 27 people have been killed across Uttar Pradesh in accidents due to rainfall in the last 24 hours, News 18 reported. 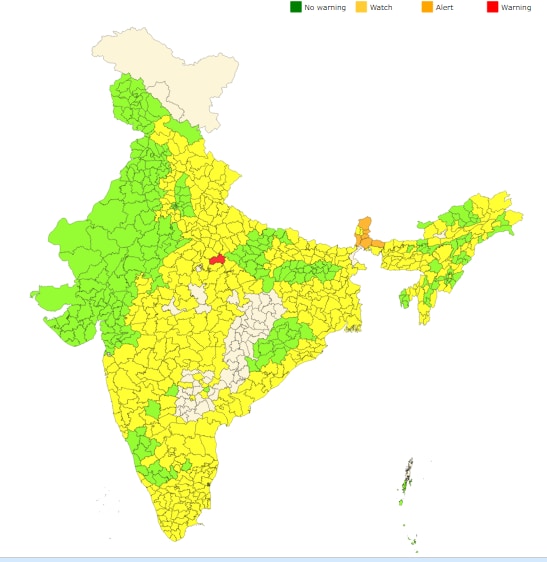 (Credit: IMD)
Read state-wide details here:
Uttar Pradesh
The IMD has issued a red alert Kanpur Dehat, Hamirpur, Fatehpur, Unnao and Kanpur, while an orange alert has been issued in Jalaun, Banda, Amethi, Barabanki, Bareilly, Moradabad and Lucknow. Several other parts of Uttar Pradesh are on yellow alert.
Authorities in a dozen UP districts, including Lucknow, Aligarh, Meerut, Gautam Buddh Nagar, and Ghaziabad, ordered closure of schools on Monday. All classes in schools across educational boards in these districts have been ordered to remain closed. In Aligarh, all schools up to class 12 will remain closed till October 12, officials were quoted by news agency PTI as saying.
Meanwhile, heavy rains claimed at least 27 lives in the last 24 hours. In Gorakhpur, two persons were killed when a boat capsized in Rapti river. In Ghaziabad, a 90-year-old woman was killed after a house collapsed due to rains. Two ,farmers were killed after being struck by lightning in Hardoi.
Also, in Bulandshahr, a 14-year-old boy died and several others were injured in three incidents of house collapse caused following heavy rains. In Balrampur, two teenagers were swept away in flood waters, news agency PTI reported.
Delhi
Delhi NCR is likley to witness more rainfall on Monday, with the IMD predicted "generally cloudy weather and light rainfall" for the region.
Delhi had recorded its second highest precipitation in 24 hours in October since 2007 with 74 mm of rainfall till 8:30 am on Sunday, according to IMD data.
Uttarakhand
Piythoragarh, Bageshwar, Almora, Udham Singh Nagar and Champawat are on orange alert. The rest of the state is on yellow alert, according to the IMD.
West Bengal
Darjeeling, Kalimpong, Jalpaiguri and Alipurduar are likely to witness heavy rainfall with IMD issuing orange alert in these areas.
Rajasthan
Even in Rajasthan, and orange alert was issued in Tonk, Bharatpur and Baran.
Besides these, the IMD said heavy rainfall spell over Tamil Nadu and Rayalaseema are likely to occur for next few days and over coastal Andhra Pradesh and Telangana on Monday.