Latest weather update: Besides, Delhi and Kerala, other parts of the country, including, Gujarat, Rajathan Goa and Karnataka, are likely to witness heavy rainfall.

The Indian Meteorological Department (IMD) issued a warning for heavy rainfall in Kerala on Monday. The weather department had predicted heavy rain in the state from July 3 to July 6. "Heavy (7cm to 11cm in 24 hours) to very heavy (12cm to 20cm in 24 hours) rainfall is very likely to occur at isolated places in Kerala on 03rd to 06th July 2022," it said.

The IMD also issued a yellow alert in parts of Delhi on Monday. An ‘orange’ alert was issued for Wednesday, with forecasts of moderate to heavy rainfall. Monsoon advanced into the national capital last week, bringing in major respite from heatwaves. Flight services were disrupted and traffic snarls were witnessed as the city saw heavy rainfall following monsoon onset.
Besides, Delhi and Kerala, other parts of the country, including, Gujarat, Goa and Karnataka, are likely to witness heavy rainfall. "Isolated heavy rainfall very likely over Gujarat state, Konkan and Goa, coastal and south interior
Karnataka, Telangana, Tamil Nadu, Puducherry and Karaikal and, Kerala and Mahe during the next five days," the IMD said in its press release on Sunday. 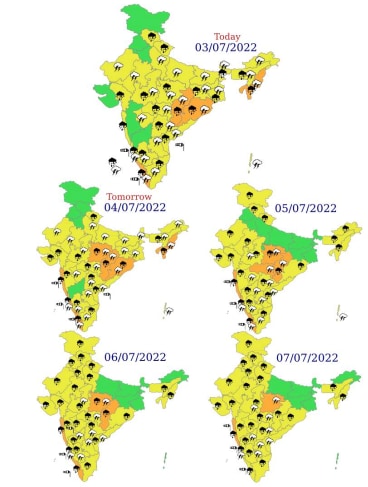 Meanwhile, the Met department has predicted light to moderate rain for many places in Rajasthan on Monday. Light to moderate rain was recorded in most areas of Rajasthan during the last 24 hours. According to the Meteorological Department, in the last 24 hours, Pidawa in Jhalawar, Nasirabad in Ajmer, Khinvsar in Nagaur, and Ratangarh in Churu recorded 7 cm of rainfall each, while Mangrol of Baran and Pisangan of Ajmer registered 6 cm rain and Chhatargarh of Bikaner received 5 cm rainfall.
Heavy rains also lashed parts of south Gujarat and Saurashtra regions, causing a flood-like situation in the affected areas. Five National Disaster Response Force (NDRF) teams were deployed in Surat, Banaskantha and Rajkot districts, officials said on Sunday.
The weather department said active monsoon conditions are likely to prevail over central India and along the west coast during the next five days and over northwest India between July 5 and 7. The southwest monsoon had covered the entire country on July 2, 2022, the IMD said.
GP Sharma, President-Metrology & Climate Change, Skymet said, “I see a good July. At Skymet, we have given a forecast for July, of 100 percent of long period average (LPA) and I expect it to be somewhere close to that. This is the rainiest month with 285 millimeter of monthly rainfall... Therefore, I feel we are going to have a good July. I fear about the second half of the monsoon, especially last few days of August and September on account of oceanic factors which are still showing same trend. July should be a good monsoon month, ending up with normal or possibly maybe a little above normal rainfall.”
(Edited by : Akriti Anand)
Check out our in-depth Market Coverage, Business News & get real-time Stock Market Updates on CNBC-TV18. Also, Watch our channels CNBC-TV18, CNBC Awaaz and CNBC Bajar Live on-the-go!
Tags