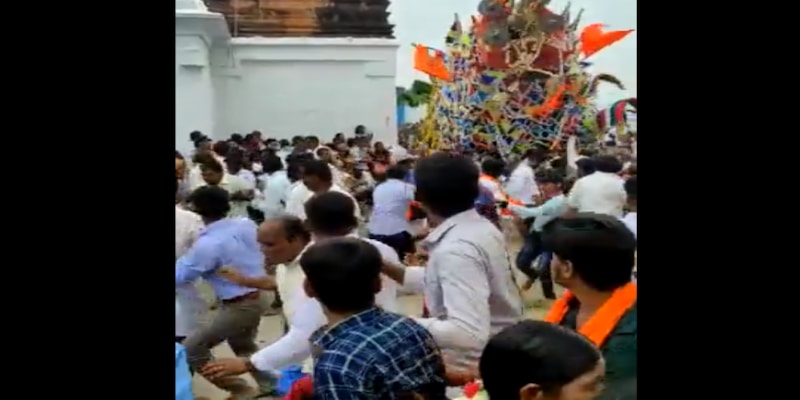 Despite the commotion, people managed to escape the falling chariot unscathed and no casualty was reported from the accident

Devotees of Karnataka’s Veerabhadreshwara Temple had a narrow escape when the temple chariot collapsed onto the crowd due to a broken wheel on Tuesday, November 1.

A huge number of devotees had gathered for the chariot procession during the Rathotsava festival. The video of the incident shared by news agency ANI went viral on social media showing the exact moment when the chariot lost balance and fell.
The devotees quickly cleared the area just before the chariot came crashing down.

#WATCH | Karnataka: Devotees had a narrow escape after a temple chariot fell down due to a broken wheel while it was being carried by them during a festival at Veerabhadreshwara Temple in Channappanapura village in Chamarajanagar, earlier today. pic.twitter.com/pUNahaBQr9

Despite the commotion, people managed to escape the falling chariot unscathed and no casualty was reported.
The Rathotsava at the Veerabhadreshwara Temple is celebrated in the month of Kartik. Located in the Channappanapura village in Chamarajanagar, Veerabhadreshwara Temple is dedicated to Lord Shiva and was constructed to honour his killing of the demon, Dakshabrahma. The temple is believed to be thousands of years old and attracts devotees throughout the year.
ALSO READ:
Shah Rukh Khan birthday: Much-anticipated Pathan trailer released today
The chariot festival or the Rathotsava had not taken place in the past few years due to the COVID-19 pandemic. This year, it was held on November 1 and witnessed massive crowds.
The incident comes close on the heels of the Morbi suspense bridge tragedy in Gujarat, where 135 people died when the colonial-era footbridge packed with sightseers collapsed on Sunday evening.
Prime Minister Narendra Modi conducted a high-level meeting on November 1, two days after the incident, and stressed a “detailed and extensive” inquiry into all the aspects of the bridge collapse. He said lessons must be learnt from the incident to prevent such devastating tragedies in the future.
ALSO READ: Doodle for Google 2022 finalists unveiled: 20 doodles open for online voting
(Edited by : Sudarsanan Mani)
Check out our in-depth Market Coverage, Business News & get real-time Stock Market Updates on CNBC-TV18. Also, Watch our channels CNBC-TV18, CNBC Awaaz and CNBC Bajar Live on-the-go!