Updated : July 10, 2020 09:45 PM IST
Gangster Vikas Dubey has been reportedly killed in a shootout as he tried to escape after the police convoy carrying him met with an accident in Kanpur on Friday morning.
Dubey, was wanted in connection with the Kanpur ambush in which eight policemen were killed, was arrested outside Mahakal temple in Ujjain on Thursday.

Gangster Vikas Dubey was killed in an encounter on Friday after a police vehicle carrying him from Ujjain to Kanpur met with an accident and he tried to escape from the spot, a senior police official said. Inspector General of Police (Kanpur) Mohit Agarwal said Dubey was killed in the encounter after he tried to flee from the spot following the road accident at Barra area in Kanpur.

After the accident, Dubey snatched the pistol of an STF personnel and tried to flee but was surrounded by the police team and he was injured in an exchange of fire. He was rushed to the hospital, where he was declared dead.

The officer confirmed that Dubey "sustained injuries" but did not confirm to what extent, saying it would come in the postmortem report.

A car in the Special Task Force (STF) convoy was taking him from Ujjain in Madhya Pradesh to Uttar Pradesh turned turtle in Kanpur. Dubey, was wanted in connection with the Kanpur ambush in which eight policemen were killed, was arrested outside Mahakal temple in Ujjain on Thursday. However, it was not immediately clear if the history-sheeter was in the same vehicle.

Here are the latest updates on Gangster Vikas Dubey's Encounter in Kanpur today:

"There should be an unbiased probe under the supervision of the Supreme Court into the killing of policemen in Kanpur and the encounter of main accused Vikas Dubey while he was trying to flee when the police vehicle overturned," Mayawati said in a tweet in Hindi.

In a separate tweet, she said, "This high-level probe is necessary for ensuring justice to eight policemen killed in Kanpur and to identify the nexus between police and criminal political elements. By such steps, UP can become crime-free."

Kanpur: Latest visuals from the site of UP STF car convoy accident and encounter of #VikasDubey in Kanpur.

Large number of people, police and media personnel seen in the area. pic.twitter.com/46hPDZ55R0 Body of gangster Vikas Dubey who was killed in police encounter today, at LLR Hospital in Kanpur. pic.twitter.com/82X50eFiaJ

Kanpur: According to police, 4 policemen were injured after a car from UP STF convoy bringing back #VikasDubey from Madhya Pradesh, overturned today morning. pic.twitter.com/rI0RMpWXwz 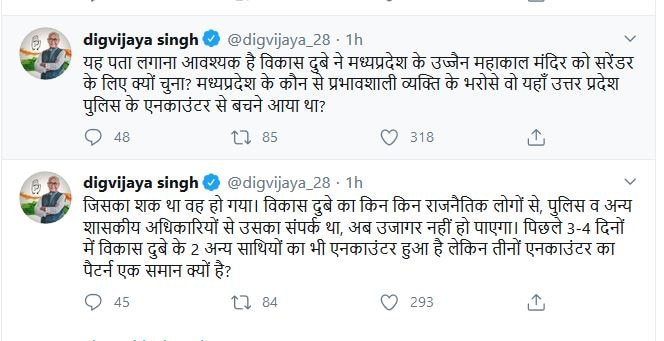 "Encounter is nothing (sic), all we did was in self defence," the news website quoted the SSP as saying.

#WATCH Vikas Dubey attempted to flee by snatching pistol of the injured policemen after car overturned. Police tried to make him surrender, during which he fired at the policemen. He was injured in retaliatory firing by police. He was later rushed to the hospital: SP Kanpur West pic.twitter.com/ZajJVLNGBU

According to sources, gangster Vikas Dubey attempted to flee after the car overturned. Shots were fired and he has been rushed to a hospital; more details awaited on his condition https://t.co/VPBEQjlcai