The two men -- Riaz Akhtari and Ghouse Mohammad -- were arrested on Tuesday hours after they allegedly hacked Kanhaiya Lal to death in Rajasthan's Udaipur. Meanwhile, Chief Minister Ashok Gehlot has assured "that no criminal will be spared irrespective of any religion or community".

As protests continue over the killing of a tailor in Udaipur, Rajasthan Chief Minister Ashok Gehlot appealed to people on Thursday to maintain peace and not hold any agitation. He also said prompt action was taken following the "heinous crime" and the two culprits were arrested subsequently. Gehlot even assured "that no criminal will be spared irrespective of any religion or community".
The two men — Riaz Akhtari and Ghouse Mohammad — in Udaipur were arrested on Tuesday hours after they allegedly hacked Kanhaiya Lal to death. According to the sources, Akhtari worked at a local mosque in Udaipur and was involved in spreading religious propaganda.
It is alleged that the accused also posted videos online wherein they said they were avenging an insult to Islam, referring to the controversial Prophet remark by former BJP leader Nupur Sharma.

Moreover, police have detained three more people in connection with the killing so far, Director General of Police (DGP) ML Lather said at a press conference.
Kanhaiya Lal was cremated on Wednesday in the presence of a large number of people even as curfew remained clamped in parts of the city. While internet services remained suspended on Wednesday, Section 144 has been imposed in all districts for the next one month. 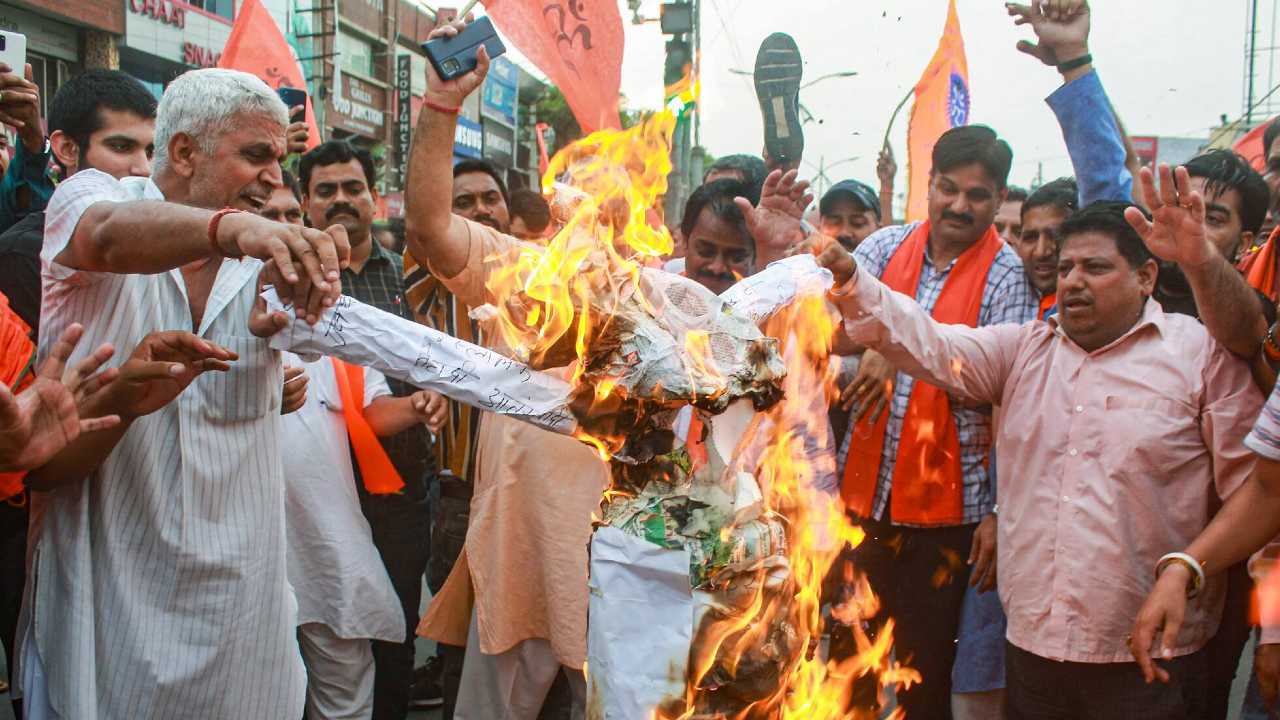 Members of Vishva Hindu Parishad (VHP) and Bajrang Dal burn an effigy during a protest against the killing of tailor Kanhaiya Lal in Udaipur, in Gurugram. (Image: PTI)
Meanwhile, the National Investigation Agency (NIA) registered a case under the anti-terror Unlawful Activities (Prevention) Act on Wednesday in connection with the tailor's murder. Earlier, the police have detained three more people in connection with the killing so far, Director General of Police (DGP) M L Lather said at a press conference.
Here are the latest development in the case
>> Ashok Gehlot has appealed to people not to hold protests. He said, "The state government took immediate action and arrested them. Their involvement with the international organisation was also unearthed. SOG (Special Operations Group) is fully cooperating with the NIA. A case has been registered under the UAPA sections. I appeal to people to not do any protest."

"I want to assure you that no criminal will be spared irrespective of any religion or community," he tweets pic.twitter.com/nb6auWLBlT— ANI MP/CG/Rajasthan (@ANI_MP_CG_RJ) June 30, 2022

>> Ashok Gehlot also met the family members of Kanhaiya Lal, who was brutally murdered in Udaipur on Tuesday, even as the curfew continued in the city on Thursday. After meeting the family, he said, "Our police did a good job; arrested accused and found international links, which is why the NIA came into the picture... We'll appeal to take this case via fast track. We want NIA to be time-bound and punish the guilty within a month. We'll cooperate with them."

#WATCH | Rajasthan CM Ashok Gehlot meets the family members of #KanhaiyaLal, who was killed by two men on June 28 in Udaipur pic.twitter.com/rQzra6Wqpd

>> Meanwhile, protests continued in parts of the country over the killing.  In a video shared by ANI, a large number of people were seen protesting against the Udaipur murder incident in Rajasthan's Udaipur.

#WATCH | A large number of people protest against the Udaipur murder incident in Rajasthan's Udaipur#KanhaiyaLal, a tailor was beheaded by two men on June 28 for allegedly posting content in support of suspended BJP leader Nupur Sharma pic.twitter.com/IMkFhqDjRY

>> The post-mortem report of Kanhaiya Lal said that 26 cuts were found on his body, News 18 reported on Tuesday.
>> The incident was recently mentioned at the United Nations (UN) as well. In response to a question on whether the UN chief has a comment on the resurgence of religious tensions in India, UN Secretary-General Antonio Guterres called for the full respect of all religions and for ensuring that different communities can live in harmony and peace globally. Guterres's message was shared by his spokesperson Stephane Dujarric On Thursday.
>> Leaders of all political parties in Rajasthan strongly condemned the murder of a tailor in Udaipur and appealed for peace and restraint. Congress leader Sachin Pilot said, "These people crossed all limits of humanity. Such a murder and the manner in which it is been executed shook everyone. They have been caught. Through fast track court, they should be given such a punishment, which be an example for the entire country." Police personnel try to douse tyres, lit on fire by members of Vishva Hindu Parishad (VHP) during their protest against the killing of tailor Kanhaiya Lal in Udaipur, in Jodhpur. (Image: PTI)
> The chief minister also announced financial assistance of Rs 50 lakh to the dependent family of the deceased. Calling the incident a "terrorist act", he said links of the accused in the case have been traced to international organisations involved in illegal activities.
> Yash, son of Kanhaiya Lal, has demanded the state government to provide security to his family . "We have demanded security. My father was not provided security but we should be provided. We have been assured of the same. The culprits should not be given anything less than a death sentence," he said. He also said that Gehlot has provided the family financial help and has also assured him of a government job. "He is cooperating with us and we are ready to cooperate too," Yash was quoted by news agency ANI as saying.
Check out our in-depth Market Coverage, Business News & get real-time Stock Market Updates on CNBC-TV18. Also, Watch our channels CNBC-TV18, CNBC Awaaz and CNBC Bajar Live on-the-go!