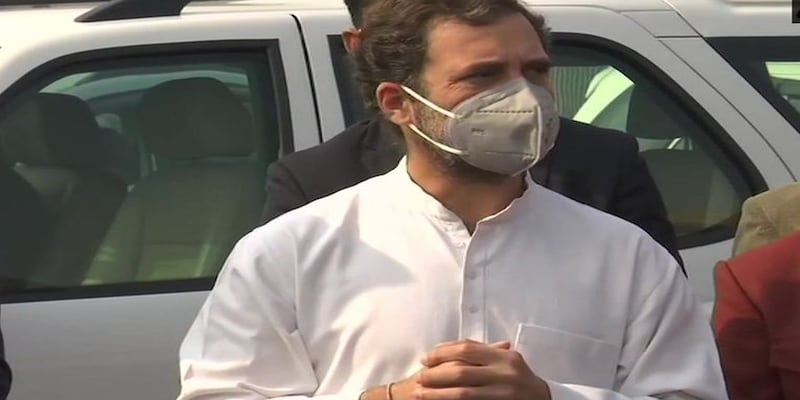 A delegation of Congress leaders on Thursday was stopped from marching to Rashtrapati Bhavan seeking President Ram Nath Kovind’s intervention for the withdrawal of the farm laws.

Several party leaders including Priyanka Gandhi were detained by the police for violating the prohibitory order and taken to Mandir Marg police station.
Priyanka, after being detained, said that the government has no respect for farmers or Jawans who are sons of farmers.
"It is a sin to brand farmers as anti-nationals. If the government is terming farmers protest as sedition, it is a sin,” she said.
Later, only Congress leader Rahul Gandhi, leader of opposition in Rajya Sabha Ghulam Nabi Azad and leader of Congress in Lok Sabha Adhir Ranjan Chowdhury were allowed to meet the President and submit the memorandum containing 2 crore signatures.
"The farmers would not return till these laws are taken back. The government should convene a joint session of Parliament and repeal these laws," he told reporters after meeting the president.
He said all the opposition parties are standing with the farmers.
Launching a scathing attack on the government, Rahul asserted that any dissent against this government is classified as having elements of terror.
"It is an assault on the idea of India. The government is stopping our MPs from moving out of our office. There is no democracy in India. It can be in your imagination, but not in reality,” he added.
(With inputs from PTI)
(Edited by : Aditi Gautam)
Check out our in-depth Market Coverage, Business News & get real-time Stock Market Updates on CNBC-TV18. Also, Watch our channels CNBC-TV18, CNBC Awaaz and CNBC Bajar Live on-the-go!