Protests over the controversial remarks against Prophet Mohammed turned violent in parts of Uttar Pradesh and Ranchi in Jharkhand. Some people were reportedly injured amid claims of stone-pelting and vandalism during protests.

Protests turned violent in parts of Uttar Pradesh and Ranchi in Jharkhand. Some people were reportedly injured amid claims of stone-pelting and vandalism during protests. Following the chaos, Uttar Pradesh Chief Minister Yogi Adityanath directed authorities to take strict actions against hooligans.
Areas where protests were held on Friday:
In Delhi
A large crowd gathered outside Delhi's Jama Masjid demanding Sharma's arrest, police said. Scores of people held a protest, carrying placards and shouting slogans against Sharma. News agency ANI shared a video with several people congregating outside the mosque. Police said the situation is under control now.
"People protested at Jama Masjid against the statements of suspended BJP leader Nupur Sharma and expelled BJP leader Naveen Kumar Jindal. We have removed the people from there. The situation is under control now," the Delhi Police was quoted by ANI as saying.
#WATCH People in large numbers protest at Delhi's Jama Masjid over inflammatory remarks by suspended BJP leader Nupur Sharma & expelled leader Naveen Jindal, earlier today
No call for protest given by Masjid, says Shahi Imam of Jama Masjid. pic.twitter.com/Kysiz4SdxH
— ANI (@ANI) June 10, 2022
"Almost 1,500 people had gathered in Jama Masjid for Friday prayers. After the prayers, nearly 300 people came out and started to protest over the inflammatory remarks by Nupur Sharma and Naveen Jindal," DCP Central District Shweta Chauhan, said.
ALSO READ | Nupur Sharma gets security by Delhi Police after controversial statement
Meanwhile, Shahi Imam of Jama Masjid denied calling for any protest and suspected that members of the All India Majlis-e-Ittehadul Muslimeen (AIMIM) were behind the protest.
"No call for protest was given by the Masjid...We don't know who are the ones protesting. I think they belong to AIMIM or are Owaisi's people. We made it clear that if they want to protest, they can, but we will not support them," Shahi Imam said. In Telangana
Protests erupted outside Mecca Masjid in Hyderabad as well. "Later, with the intervention of the Police, protesters were dispersed from the spot. "Police force and the CRPF have deployed in the area now," reports said.

#WATCH | Telangana: Protests take place outside Mecca Masjid in Hyderabad against the controversial remarks by suspended BJP leader Nupur Sharma. Later, with the intervention of the Police, protesters were dispersed from the spot. Police force & CRPF deployed in the area now. pic.twitter.com/3bbY7OJ5PP

Moreover, strict security arrangements were made in Kanpur ahead of Friday prayers and and section 144 of CrPC had been imposed which restricts the assembly of more than four persons.
Awanish Awasthi said, "Strict action will be taken against anyone who unnecessarily attempts to disrupt the peace and order situation." He said appealed to the people to maintain harmony and refrain from coming out on roads unnecessarily
In Bengal
A video released by ANI showed people in Howrah holding a protest.

In Jharkhand
Several people were injured after protests in Ranchi, Jharkhand turned violent. Vehicles were torched and vandalised and stone-pelting took place during the protest.
DIG Ranchi Anish Gupta said, "The situation is a little tense but under control. We are making all efforts from our end. Heavy security has been deployed. Senior officials are also present at the spot. We are making all efforts to see that the crowd is dispersed from here."

In Maharashtra
A large number of people, including women, took to streets to hold march in Navi Mumbai and Solapur in Maharashtra, in protest against the controversial remarks by suspended BJP leader Nupur Sharma.

#WATCH | Maharashtra: A large number of people carry out a protest march in Solapur against the controversial remarks by suspended BJP leader Nupur Sharma. pic.twitter.com/dVpwrq0r3G

In Jammu and Kashmir
Earlier on Friday, parts of Jammu and Kashmir observed a shutdown after protests erupted over the controversial remarks by two now-suspended BJP leaders. A curfew was imposed and internet services were snapped in Bhaderwah and Kishtwar as a precautionary measure. 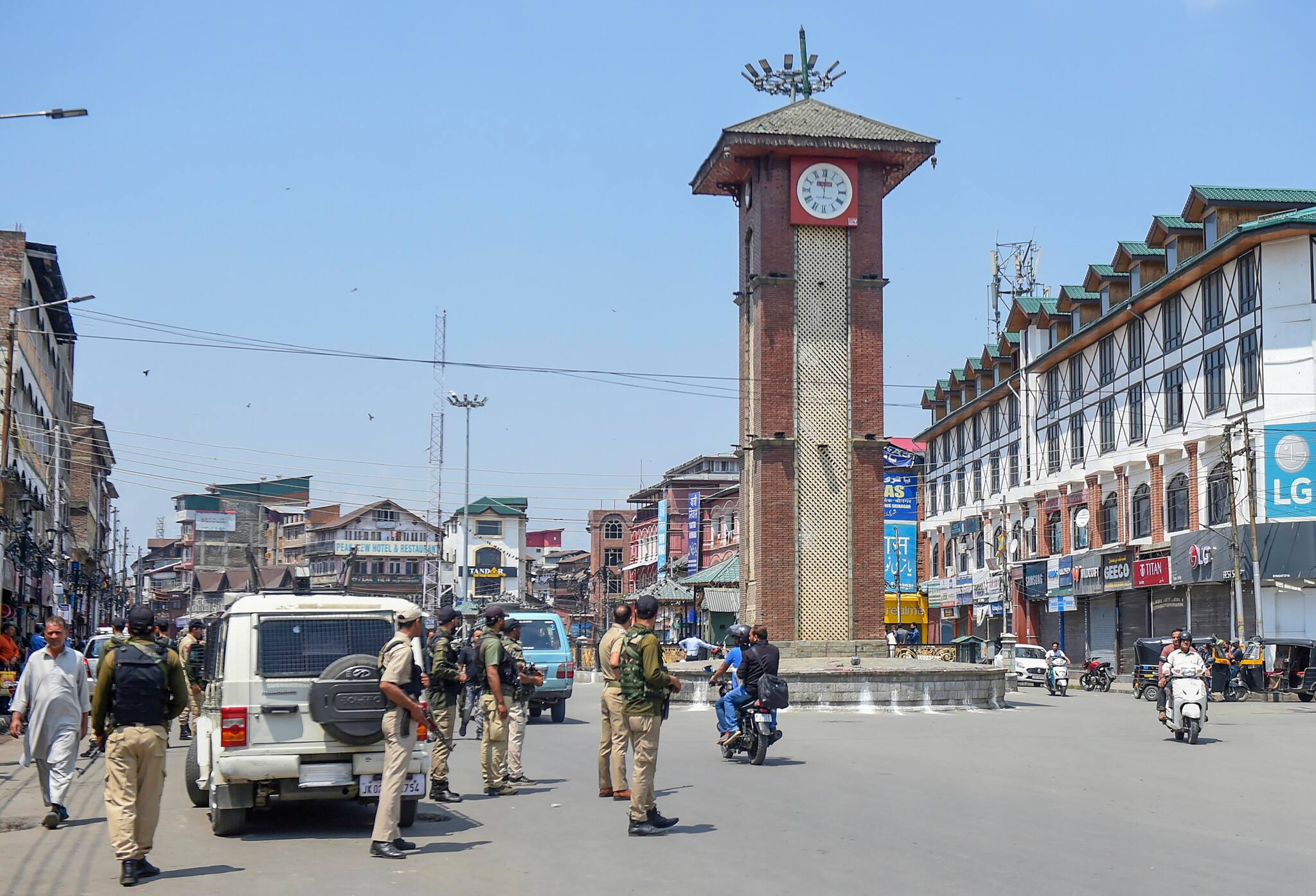 Security personnel on duty during a strike against controversial remarks by two now-suspended BJP leaders about Prophet Mohammad, in Srinagar, Friday, June 10 (Image: PTI)
The controversy
Last week, BJP spokesperson Nupura Sharma allegedly made derogatory remarks against Prophet Muhammad which ignited protests from Muslim groups. While Sharma was suspended, the party expelled its Delhi media head Naveen Kumar Jindal over the matter.
The BJP had also issued a statement aimed at assuaging the concerns of minorities and distancing itself from these members. It asserted that the party respects all religions and strongly denounces the insult of any religious personality.
Moreover, Nupur Sharma unconditionally withdrew her controversial statement made in a TV debate. She said her comments were a reaction to "continuous insult and disrespect towards our Mahadev"' (Lord Shiva). Both Sharma and Jindal said it was never their intention to hurt anyone's religious feelings. 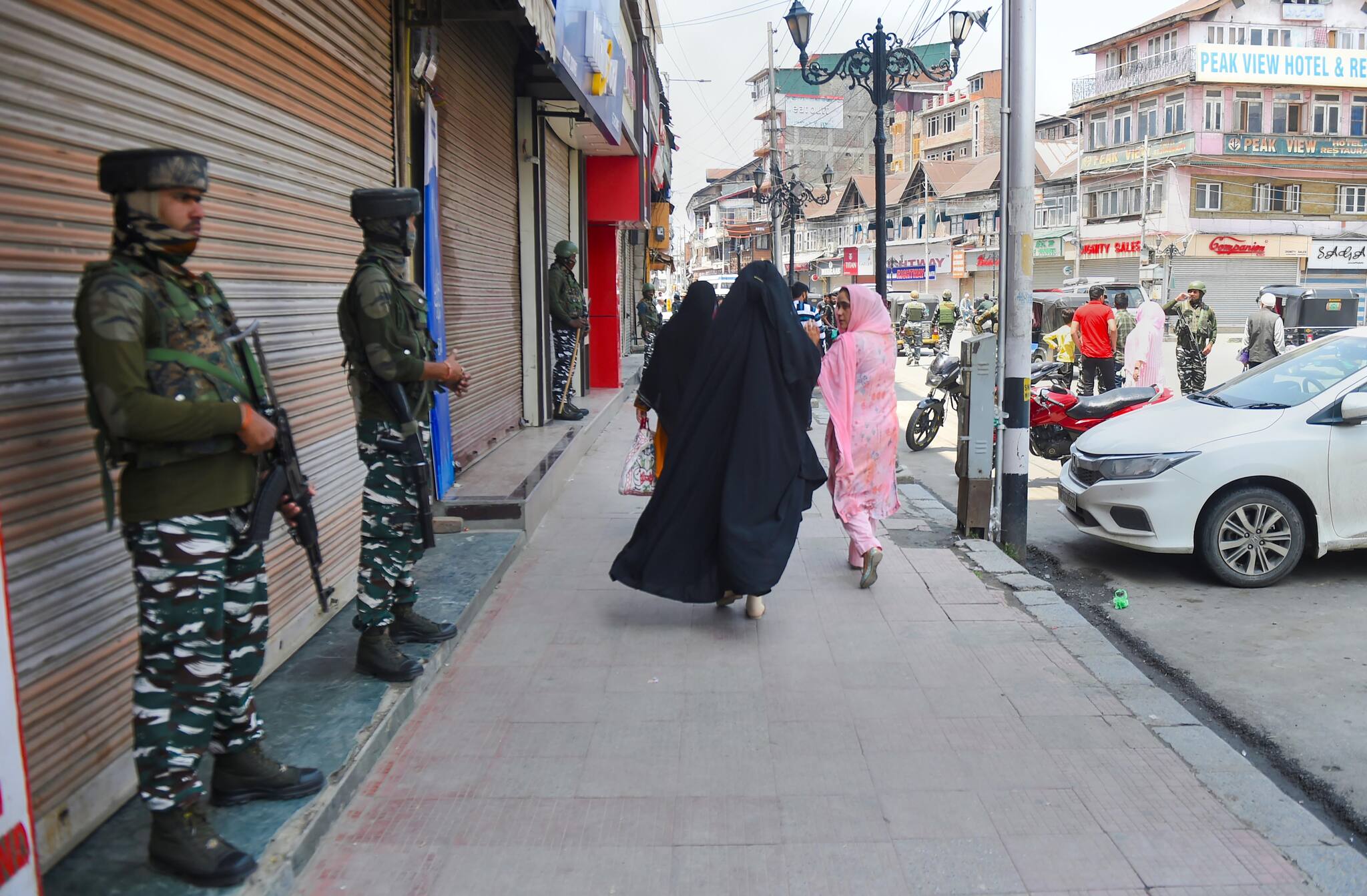