Voting for presidential elections on July 18, counting on July 21

Voting for presidential elections on July 18, counting on July 21 The voting for the presidential elections in India will take place on July 18 and the counting of votes will be held on July 21 in New Delhi, the Election Commission of India (EC) announced on Thursday. The new President will be sworn in on July 25. 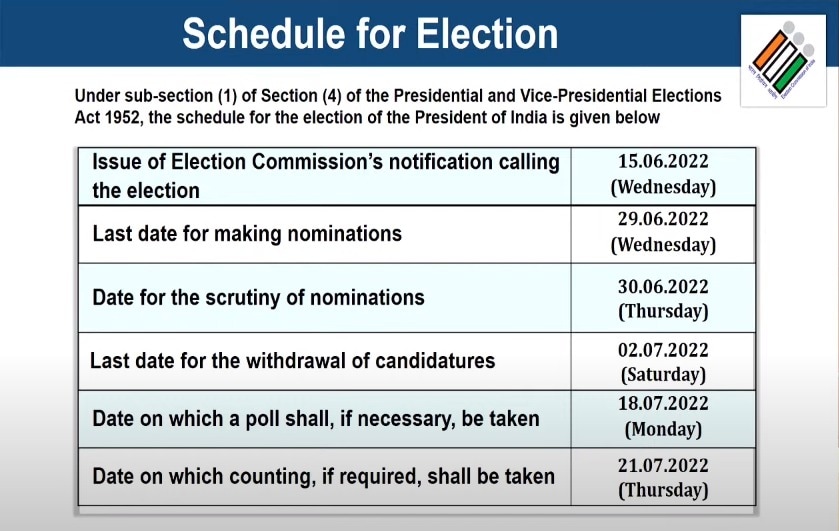 He said the total value of the electoral college, comprising 4,809 electors, is 10,86,431 and the winning candidate has to get at least 50 percent plus one vote to be declared as elected. As many as 543 Lok Sabha MPs, 233 Rajya Sabha MPs and 4033 MLAs will elect the president. (Credit: Election Commission of India)
"The value of the vote of an MP will be 700. Those in preventive detention can vote and those in jail will have to apply for parole and if they get parole, they can vote," Chief Election Commissioner (CEC) Rajiv Kumar said while announcing the schedule.
The voting will be held via secret ballot. "Election shall be held with the system of proportional representation by means of single transferable vote & the voting shall be by secret ballot," Rajiv Kumar said.
"All the members have to maintain the secrecy of the ballot" and that "no political party can issue whip for presidential elections", the CEC said.
Also Read | Assembly poll results to have bearing on President's election due this year
The presidential elections will take place as the term of President Ram Nath Kovind will end on July 24 this year. Ram Nath Kovind was sworn in as the 14th President of India on July 24, 2017. After the election, the new President will take oath on July 25.
How is a President elected in India
The President of India is elected by the members of an electoral college. The electoral college consists of the elected members of both the Houses of Parliament (Lok Sabha and Rajya Sabha) and the members of the Legislative Assemblies of states including that of Union Territories of Delhi and Pondicherry.
The nominated members of either Rajya Sabha and Lok Sabha or legislative assemblies of the states are not eligible to be included in the electoral college. Therefore, they are not entitled to participate in the election. similarly, Legislative Councils have no role in the presidential elections.
The presidential elections follow the system of proportional representation using a single transferable vote. The value of each vote is pre-determined in proportion to the population of the respective state based on the 1971 census.
ALSO READ | President Kovind addresses nation on eve of 73rd Republic Day; applauds India’s unmatched resolve during COVID-19
(Edited by : Akriti Anand)
Check out our in-depth Market Coverage, Business News & get real-time Stock Market Updates on CNBC-TV18. Also, Watch our channels CNBC-TV18, CNBC Awaaz and CNBC Bajar Live on-the-go!