Updated : December 25, 2020 09:29 AM IST
Greeting people on Christmas, Prime Minister Narendra Modi on Friday said the life and principles of Lord Christ gives strength to millions across the world.
The PM also paid rich tributes to the former prime minister and BJP stalwart Atal Bihari Vajpayee on his birth anniversary.

Greeting people on Christmas, Prime Minister Narendra Modi on Friday said the life and principles of Lord Christ gives strength to millions across the world. May his path keep showing the way in building a just and inclusive society, the prime minister said in a tweet.

"Merry Christmas! The life and principles of Lord Christ gives strength to millions across the world," Modi said.

"May everybody be happy and healthy," he added. 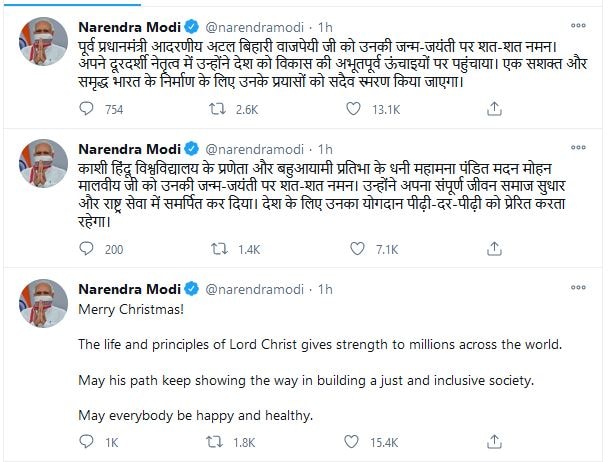 "His efforts for making a strong and prosperous India will be remembered forever," Modi said.

Born in 1924, Vajpayee was a founder member of the Jana Sangh and then the BJP, a party which rose from the margins to rule India for the first time in the 1990s with him being its main face.

His tenure is credited with ushering in a fresh wave of liberalisation, boosting growth and infrastructure.

Born in 1861, Malaviya was a former president of the Congress who later founded the Hindu Mahasabha. He was also one of the founders of the Banaras Hindu University (BHU).

Noting that Malaviya was an inspiration behind BHU, Modi lauded him as a multifaceted talent.