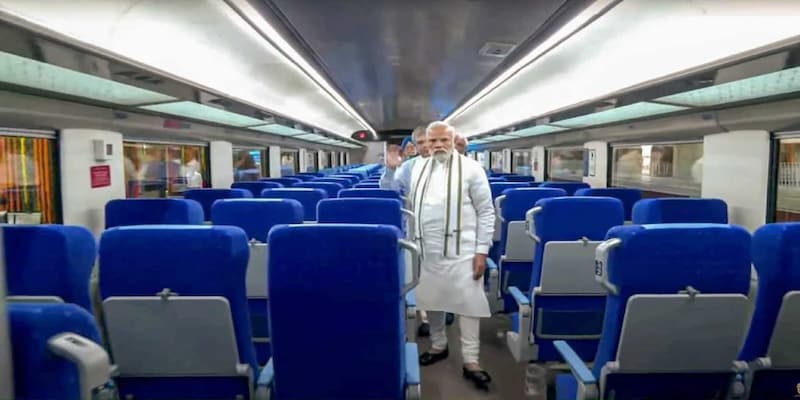 The Vande Bharat Express train cars have been outfitted to support speeds of up to 160 kmph with newer suspensions that are supposed to provide a comfortable ride over the 520 km journey.

Prime Minister Narendra Modi flagged off India's third Vande Bharat Express on Friday during his two-day visit to Gujarat. PM Modi launched the train, which is an upgraded version of the Vande Bharat Express, from Gandhinagar. The new semi-high speed train will travel between Gandhinagar and Mumbai. Among its upgrades is the inclusion of the Indian Railways' home-grown Kavach anti-collision system. The other two trains are running on the New Delhi-Varanasi and New Delhi-Shri Mata Vaishno Devi Katra routes.

"The Vande Bharat Express offers a myriad of superior amenities which will provide passengers with aircraft like travelling experience and advanced state-of-the-art safety features including Kavach technology - an indigenously developed Train Collision Avoidance System," Sumit Thakur, CPRO of the Western Railway zone, told ANI.
The train cars have been outfitted to support speeds of up to 160 kmph with newer suspensions that are supposed to provide a comfortable ride over the 520 km journey. The weight of the train carriages has been reduced by 38 tonnes, which ensures more comfort at higher speeds.
Other features for passengers include 32-inch screens for passenger information and infotainment, 180-degree rotating seats in the Executive Coach, accessible washrooms, reclining seats, automatic fire sensors, CCTV cameras, on-demand content with WiFi, and three-hour battery backup.
The train will also come with a photocatalytic ultraviolet air purification system in a roof-mounted package unit (RMPU), which will help provide filtered air into the train. The component was added on the recommendation of the Central Scientific Instruments Organisation (CSIO), Chandigarh.
The Vande Bharat trains are a flagship part of the 'Make in India' initiative, even though some components have been imported from other countries, which the government aims to replace with indigenous alternatives in the newer trains. The Indian Coach Factory has plans to manufacture five Vande Bharat trains by August 2023.
(Edited by : Priyanka Rathi)
Check out our in-depth Market Coverage, Business News & get real-time Stock Market Updates on CNBC-TV18. Also, Watch our channels CNBC-TV18, CNBC Awaaz and CNBC Bajar Live on-the-go!