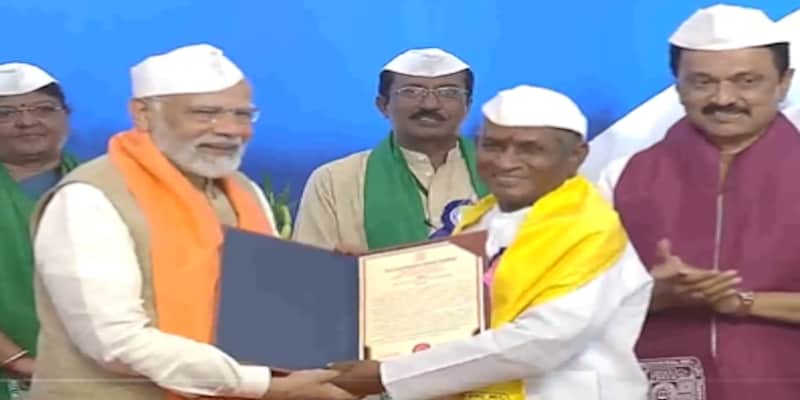 Chief Minister MK Stalin, Governor RN Ravi, were among the others present at the ceremony.
Seventy-nine-year old Ilaiyaraaja is a legendary musician, lyricist, singer, composer, arranger, conductor, orchestrator and instrumentalist. The music maestro with a 45-year-plus career,, prominently in Tamil films, has composed over 7,000 songs.
Ilayaraaja received several awards for his work throughout his career. In 2010, he was awarded Padma Bhushan and was conferred Padma Vibhushan in 2018.

According to PMO, Prime Minister in his key address at the convocation ceremony termed visiting Gandhigram as an inspirational experience.
"Gandhigram was inaugurated by Mahatma Gandhi himself and one can see the spirit of Mahatma Gandhi's ideas of rural development at the institute," he said.
He further said that it is important to understand Mahatma Gandhi’s vision of rural development and that the government draws inspiration from him.
PM Modi highlighted that Gandhian values are becoming increasingly relevant. "Whether it is about ending conflicts or climate crisis, Mahatma Gandhi's ideas have the answers to many of today's challenges."
Inspired by the Mahatma Gandhi's idea of self reliance, PM said that the government is working towards Aatmanirbhar Bharat.
"Mahatma Gandhi saw Khadi as a tool of self-reliance in villages. In the self reliance of villages, he saw the seeds of self-reliant India. Inspired by him, we are working towards Atmanirbhar Bharat," he noted.
“Tamil Nadu was a key centre of the Swadeshi movement. It will once again play an important role in Aatmanirbhar Bharat”, the Prime Minister added.
He also gave the examples of ‘Khadi for Nation, Khadi for Fashion’ saying that "Gandhigram in Tamil Nadu is a place closely associated with Bapu. The best tribute to him is to work on the ideas close to his heart. One such idea is Khadi."
“Now, even global fashion brands are taking to Khadi due to its eco-friendly characteristics. “This is not a revolution of mass production but a revolution of production by the masses,” he said.
In his concluding remarks, he congratulated the students of the institute and said that the world expects India to do great things. Because India’s future is in the hands of a ‘Can Do’ generation of youth.
“Youth, who not only accept challenges but also enjoy them, who not only question but also find answers, who are not only fearless but are also tireless, who not only aspire but also achieve.”
“My message to the youth graduating today is - You are the builders of New India. You have the responsibility of leading India for the next 25 years in its Amrit Kaal,” he concluded.
Also Read: G20 Summit: PM Narendra Modi to visit Indonesia from Nov 14-16 — details here
Prime Minister Narendra Modi on Friday presented an honorary doctorate to music maestro Ilaiyaraaja at the 36th Convocation Ceremony of Gandhigram Rural Institute in Dindigul of Tamil Nadu.
(Edited by : Anushka Sharma)
Check out our in-depth Market Coverage, Business News & get real-time Stock Market Updates on CNBC-TV18. Also, Watch our channels CNBC-TV18, CNBC Awaaz and CNBC Bajar Live on-the-go!