The quantity of food grains available for the poor will now come down. As per Government estimates, the total cost of food subsidy will now cost Rs 2 lakh crore to state exchequer for 81.35 crore impoverished people in the country.

After 28 months since the scheme started, the Union cabinet has decided to allow PM Kisan Anna Yojana (PMGKAY) to sunset. The Narendra Modi government will instead grant free rations for a whole year under the National Food Security Act (NFSA) from January 1, 2023.

As per government estimates, the total cost of food subsidy will now cost Rs 2 lakh crore to the state exchequer for 81.35 crore impoverished people in the country.
As per the information, the quantity of food grains available for the poor will decrease. This is because grains under the food security act and the Garib Kalyan Yojana put together a massive average of 50 kgs of rice and wheat per month for an average beneficial family. But in the normal PDS allocation, only an average of 30 kgs will be available for each family per month. Moreover, even the highly subsidised rates of Rs 3 per kg for rice and Rs 2 per kg for wheat under PDS will be waived. 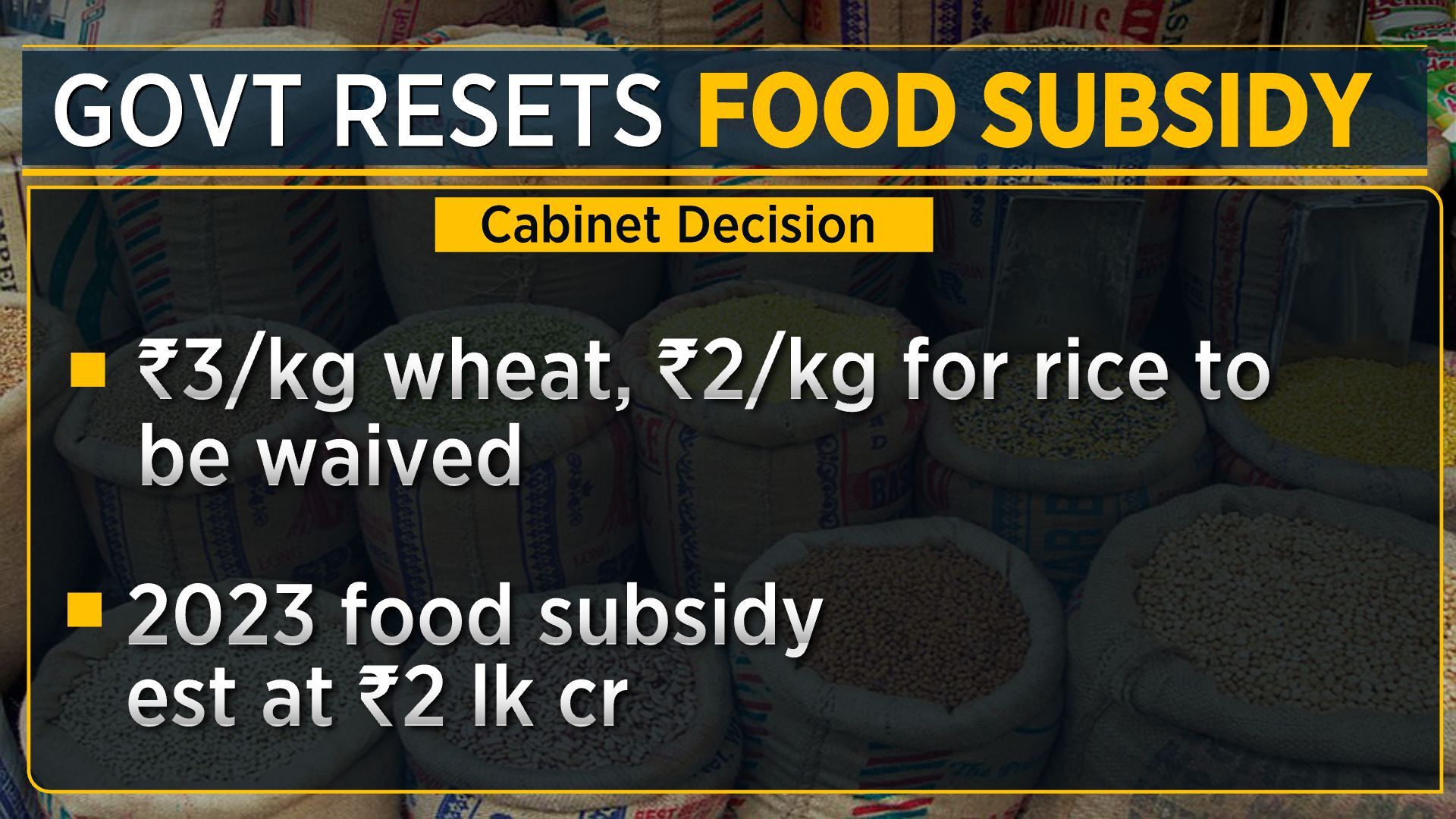 Also Read: India to provide free ration to poor people for one year under food law
The government has taken the correct decision to not extend the PMGKAY beyond December, said former agriculture secretary Siraj Hussain.  "What is really surprising to many people including economists is to make the decision to making food grains completely free," he added.
The farmers are not impacted by this decision, Hussain said. " According to my food calculations, if the off-take of food grains is of the level of 2021, then the total hit the government will take of Rs 15,000 crore, which is not very high as far as government finance is concerned," he added.
The closure of PMGKAY is regarded as a significant fiscal positive for the government. Sources in the government told CNBC-TV18 that the additional annual cost for distributing food grains free of charge under the NFSA is likely to be Rs 20,000-25,000 crore, which makes only 0.1 percent of the GDP in comparison to the estimated cost of Rs 1.20 lakh crore for PMGKAY, which is over 1 percent of the GDP.
Hussain also said that in his view, the PMGKAY has ended and the NFSA beneficiaries would get it free of cost. "I dont see it as the merging of two schemes," he added. 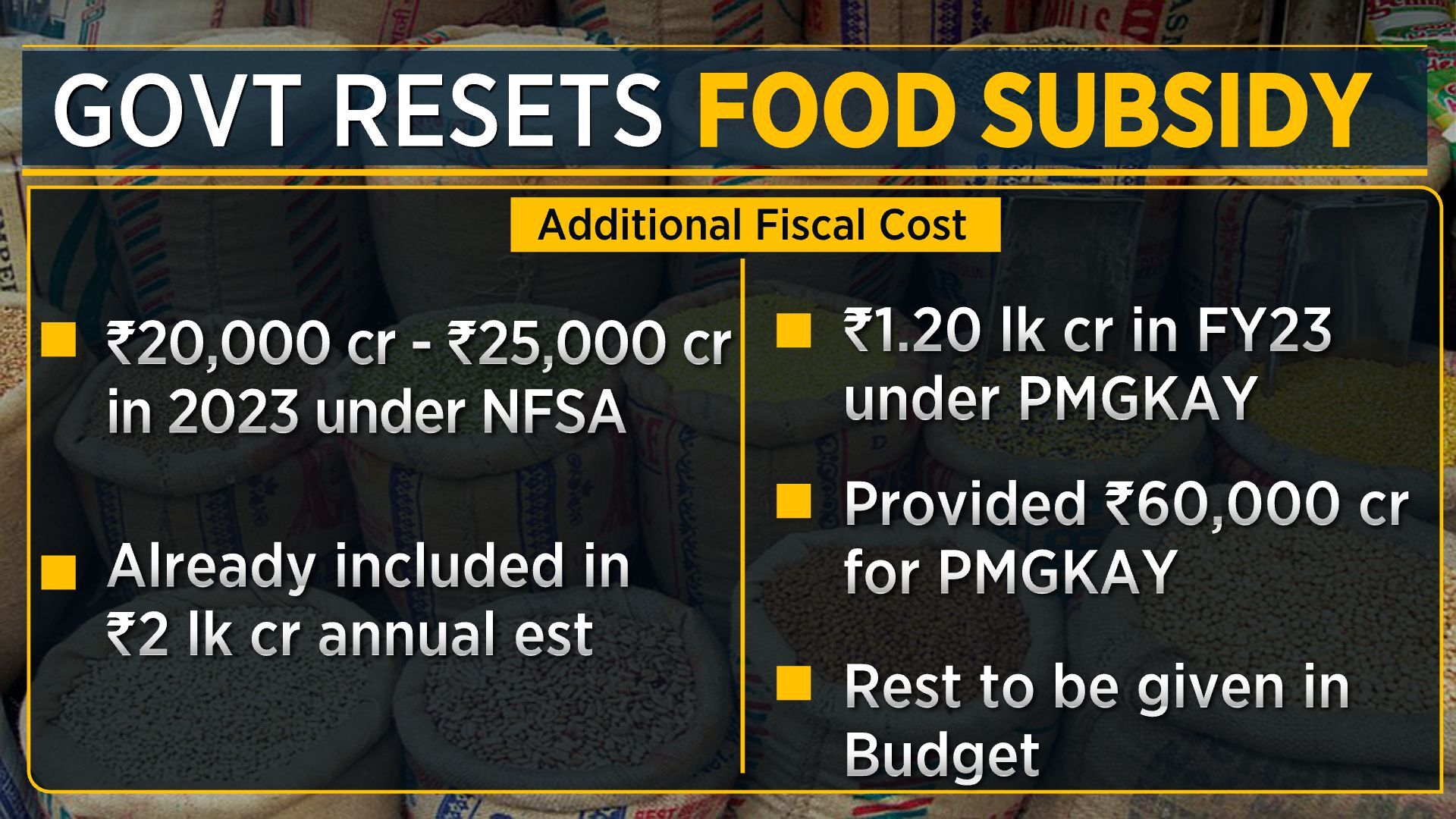 Also, Rs 60,000 crore of this additional liability has been provided in the supplementary demands for grants. In contrast, the balance of Rs 60,000 crore is likely to come through in the Revised Estimates of the Union budget on February 1 next year.
Before the Covid pandemic hit India, the food subsidy was penciled at Rs 1.15 lakh crore for FY21, which rose by a massive 148 percent in FY22 in the post-Covid year and for this fiscal year would touch a record high of Rs 3.20 lakh crore, if PMKAY is extended.
Also Read: PM Kisan | When will 13th instalment be released — Steps to check your eligibility here
Check out our in-depth Market Coverage, Business News & get real-time Stock Market Updates on CNBC-TV18. Also, Watch our channels CNBC-TV18, CNBC Awaaz and CNBC Bajar Live on-the-go!