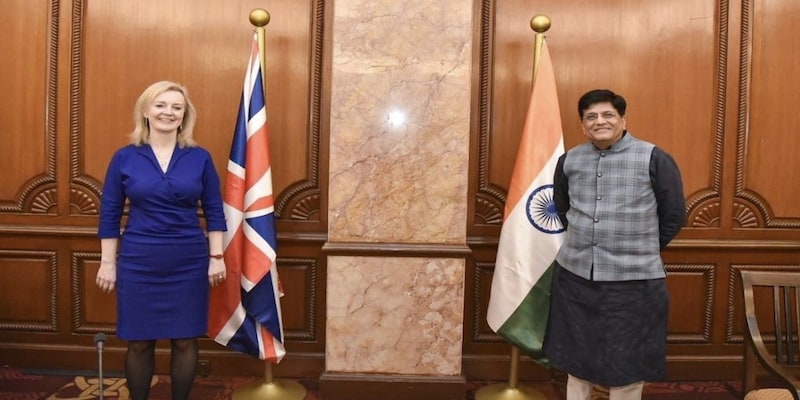 Addressing members of the Institute of Chartered Accountants of India (ICAI), Union minister Piyush Goyal said, "...I do hope (that) with...Liz Truss assuming prime ministership of the UK, we may now be able to make up for some lost time (to conclude the FTA negotiations)"

With Liz Truss becoming the new prime minister of the UK, Commerce and Industry Minister Piyush Goyal has expressed hope for an early conclusion of talks with Britain for a free trade agreement to boost bilateral economic ties.

"A little bit of political changes may have derailed (conclusion of FTA negotiations) by a few weeks, but I do hope (that) with...Liz Truss assuming prime ministership of the UK, we may now be able to make up for some lost time (to conclude the FTA negotiations)," Goyal said on Monday while addressing members of the Institute of Chartered Accountants of India (ICAI).
Officials in India were looking to conclude the negotiations for the trade agreement by August 31, but political developments in Britain could have slowed the talks a bit. In January, both countries formally launched talks for a free trade agreement (FTA) to boost bilateral trade and investments. It was launched when Boris Johnson was the prime minister, and Truss was the international trade secretary.
ALSO READ | Liz Truss named as Britain's next prime minister: Here's what happens next
In such pacts, two countries either eliminate or significantly reduce customs duties on the maximum number of goods traded between them besides easing norms for promoting investments and services trade.

Congratulations @TrussLiz on being chosen to be the next PM of the UK. Look forward to work for closer India-UK trade & investment ties.

I am sure under your leadership our Comprehensive Strategic Partnership will be further strengthened. 🇮🇳🇬🇧 pic.twitter.com/sIHb7xKL1o— Piyush Goyal (@PiyushGoyal) September 5, 2022

"We are at an advanced stage (of FTA talks) with the UK...Miss Anne-Mary, who is currently the trade and investment Minister, and I are in regular contact. We are shooting for an agreement between India and the UK within the next few months, possibly by Diwali," Goyal said.
India has become one of the world's attractive investment destinations, and it is evident from the way world leaders and developed countries are making every effort to expand trade and investments in India and looking for bilateral agreements, he added. Talks are happening on certain goods like scotch and automobiles from the UK side and certain products from the Indian side.
ALSO READ | Liz Truss' first priority will be to keep the ship afloat over what will be a difficult winter, say experts
India's main exports to the UK include ready-made garments and textiles, gems and jewellery, engineering goods, petroleum and petrochemical products, transport equipment and parts, spices, metal products, machinery and instruments, pharma and marine items.
Major imports include precious and semi-precious stones, ores and metal scraps, engineering goods, professional instruments, non-ferrous metals, chemicals and machinery. In the services sector, the UK is one of the largest markets in Europe for Indian IT services.
The bilateral trade increased to $17.5 billion in 2021-22 compared to $13.2 billion in 2020-21. India's exports stood at $10.5 billion in 2021-22, while imports were $7 billion.
Check out our in-depth Market Coverage, Business News & get real-time Stock Market Updates on CNBC-TV18. Also, Watch our channels CNBC-TV18, CNBC Awaaz and CNBC Bajar Live on-the-go!