Bangladesh Prime Minister Sheikh Hasina arrived in India on Monday. She said that her primary concern is fulfill the basic needs of our people. "With friendship, you can solve any problem," she said earlier in the day.

Prime Minister Narendra Modi met his Bangladeshi counterpart Sheikh Hasina on Tuesday — who is on a four-day visit to India. Minister of External Affairs spokesperson Arindam Bagchi said both the leaders held talks to review and further strengthen the all-encompassing India-Bangladesh partnership.
Addressing media at the joint press conference on Tuesday, PM Modi said India will "move should to shoulder with Bangladesh". Meanwhile, the Bangladeshi PM thanks PM Modi for "resolving the issue of Kushiayara".
"We must take lessons from the COVID-19 pandemic and world conflicts and strengthen our economies," PM Modi said.
PM Modi said, "54 rivers flow through India-Bangladesh border and are linked to the livelihood of people in both countries. Today, we have signed an important agreement regarding water-sharing of Kushiyara River." This pact will benefit Southern Assam in India and Sylhet region in Bangladesh, he said.
He added that Maitree Super Thermal Power Project will ensure affordable electricity in Bangladesh.
India also extended cooperation on flood mitigation. "We have been sharing real-time data regarding floods with Bangladesh and have also discussed terrorism...we have increased the data sharing duration," PM Modi said.
Moreover, India also decided to extend cooperation in the Information Technology, space and nuclear sectors. The Indian prime minister said that talks are also underway between the two countries on power transmission lines.
Earlier in the day, the Bangladesh Prime Minister said that her primary concern is to fulfill the basic needs of our people. "With friendship, you can solve any problem," she said earlier in the day.

Hasina said her talks with PM Modi would focus on improving the condition of the people in their respective countries, poverty alleviation and economic development. "Our main aim is to develop the economy and fulfill the basic needs of our people," Hasina said. Prime Minister Narendra Modi welcomes his Bangladeshi counterpart Sheikh Hasina during her ceremonial reception at the Rashtrapati Bhavan. (Image: PTI)
"India is our friend. Whenever I come here, it is pleasure for me, especially because we always recall the contribution India has made during our liberation war. We have a friendly relationship, we are cooperating with each other," Hasina was quoted by news agency ANI as saying.
Hasina arrived in Delhi on Monday afternoon. Soon after arriving in New Delhi, the Bangladesh Prime Minister met External Affairs Minister S Jaishankar and discussed issues of bilateral interest. She also offered floral tributes at Rajghat, the memorial to Mahatma Gandhi. 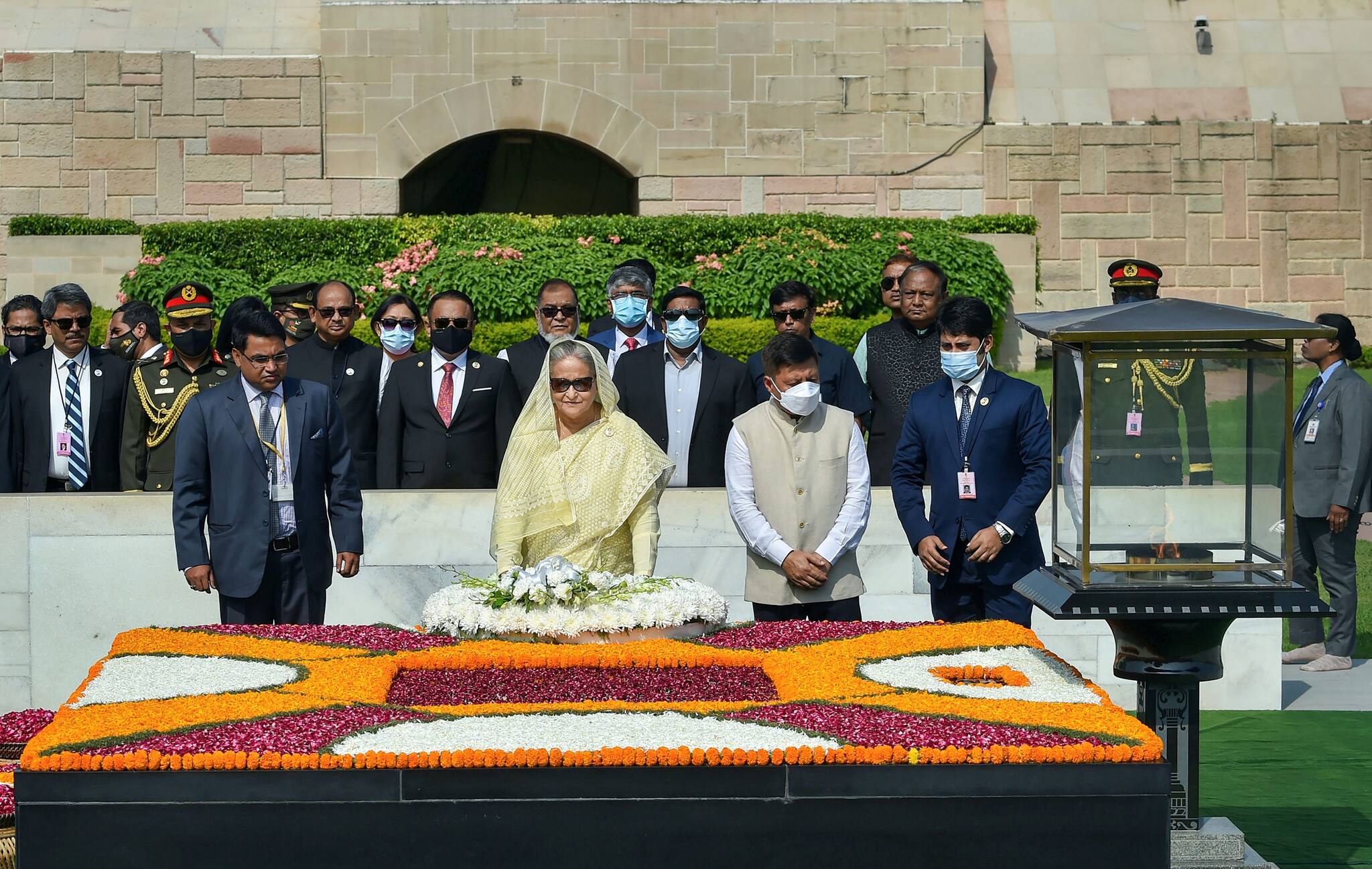 Bangladesh Prime Minister Sheikh Hasina pays homage to Mahatma Gandhi at his memorial Rajghat in New Delhi, Tuesday. (Photo: PTI)
On Tuesday, PM Modi welcomed her at the Rashtrapati Bhawan forecourt where she was accorded a tri-services guard of honour. She even visited Nizamuddin Aulia Dargah in the national capital and is scheduled to travel to Ajmersharif on Thursday.
ALSO READ | India, Bangladesh to broad-base ties; Sheikh Hasina raises NRC issue with PM Modi
External Affairs Minister S Jaishankar and Adani Group Chairman Gautam Adani called on the Bangladeshi Prime Minister on Monday evening. During her stay, Hasina will also call on President Droupadi Murmu and Vice President Jagdeep Dhankhar.
India-Bangladesh relations
Bangladesh is now India's biggest trade partner in South Asia and the bilateral trade has grown from USD 9 billion to USD 18 billion in the last five years.
It has also become the fourth largest export destination for India with the exports registering a growth of over 66 per cent from USD 9.69 billion in 2020-21 to USD 16.15 billion in 2021-22, news agency PTI reported.
Moreover, India has been a hub of medical treatment for Bangladesh nationals. Of the 2.8 lakh visas issued in 2021, 2.3 lakh were medical visas. Bangladesh is currently India's biggest visa operation globally. In 2019, 13.63 lakh visas were issued.
Notably, Bangladesh is an essential partner under India's "Neighbourhood First" policy. India and Bangladesh have sought to create a model for regional cooperation besides reviving several connectivity initiatives over the last few years.
This is Hasina's first visit after both nations' bilateral relations touched their 50th year in 2021. Last year also marked the 50th anniversary of Bangladesh's independence and the 100th birth anniversary of Sheikh Mujibur Rahman, the founding father of the nation.
PM Modi visited Bangladesh in 2021. Maitri Diwas celebrations were held in 20 capitals around the world including Delhi and Dhaka. Prime Ministers of both countries have met 12 times since 2015.
(With inputs from PTI, ANI)
(Edited by : Akanksha Upadhyay)
Check out our in-depth Market Coverage, Business News & get real-time Stock Market Updates on CNBC-TV18. Also, Watch our channels CNBC-TV18, CNBC Awaaz and CNBC Bajar Live on-the-go!