Mumbai got pounded by heavy rains and high wind speed for the second day in a row on Wednesday. These rains were the heaviest since 2005 and local authorities also warned of flash flooding in many areas.

The heavy rains and gusty winds also uprooted several trees, leading to traffic jams in several parts, including the western express highway, which is an arterial road.

Commuters had to face the brunt with cars getting damaged. Local trains, which are currently used only by essential workers, have been suspended on the harbour line and also on the western line.

The winds were so strong that the iconic signage of the BSE building toppled. The head of the exchange Ashish Chauhan tweeted saying they are seeking the help of fire brigade to ensure that the signage doesn't fall to the ground and injure anyone or create property damage.

Here are the latest updates and developments on Mumbai rains today:

Mumbai is expected to receive heavy rain at isolated places tomorrow as well.

We urge all to not step out unless necessary and stay away from water bodies & water logged areas.

Citizens are requested to take all precautions & #Dial100 in case of an emergency. — Mumbai Police (@MumbaiPolice) August 5, 2020

Intense to very intense spell of rainfall likely to continue over Mumbai during next 3 hours. pic.twitter.com/7460xccWo1

JNPT: Owing to inclement weather and above normal gusts of wind, there has been damage to three cranes of JNPCT terminal of JNPort. However, there have been no injuries and everyone is safe. Exact damage is being ascertained.

The MeT department has warned of an intense spell of 30 to 50 mm rainfall per hour with strong winds in Mumbai and suburban areas.

As per an alert issued by the India Meteorological Department at 6 pm, strong winds could reach up to 70 to 80 km per hour speed and occasionally gust to 100 km per hour in the next three to four hours.
This intense spell could result in heavy water-logging and flooding in low-lying areas of the city and suburbs, disrupting road and rail traffic.
The department also warned of the possibilities of tree falls, landslides and dangers to old and dilapidated structures.

There are two local trains are stuck between Masjid and Bhaykhala local stations in Mumbai due to water on tracks. 150 passengers from first local going from CST to Karjat have been rescued by Railway staff. Some are still to be rescued. Another local which is coming from Karjat to CST is stuck at about 60 mtrs from Masjid station which may have 50-60 passengers. Water is about 2.5 to 3 feet deep.

1 team of 5 BN NDRF u/c Ashish, DC from Andheri have moved for the spot. 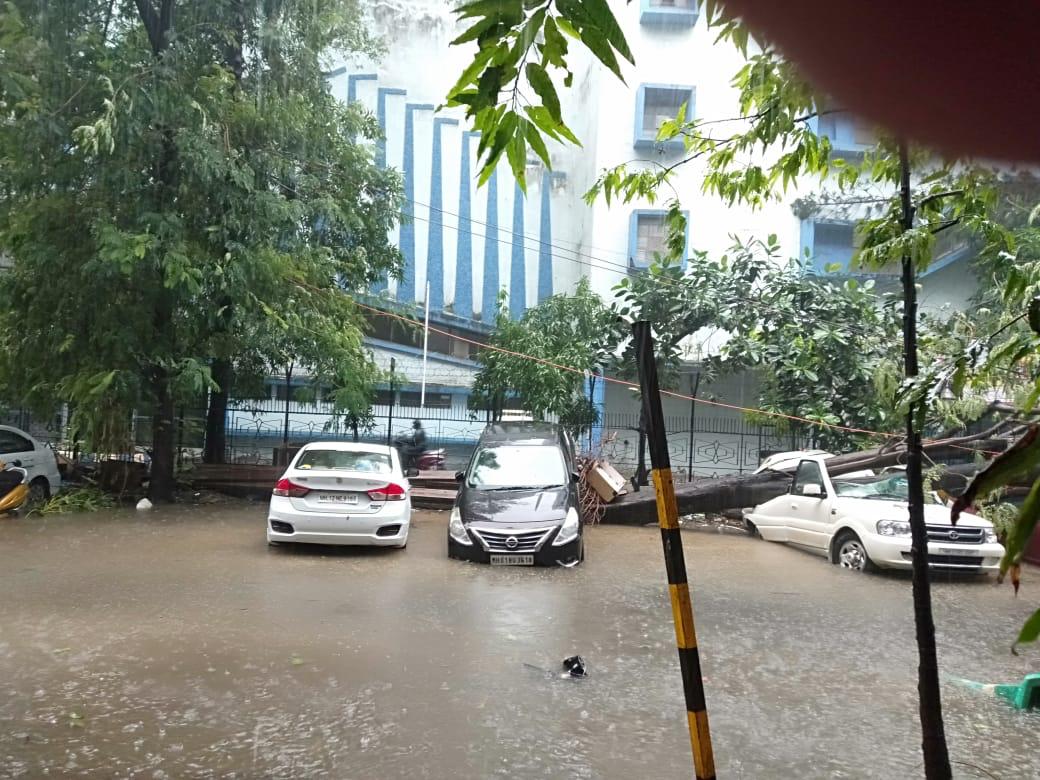 Outside State Secretariat in South Mumbai. Near Nariman Point

6:00 pm The signage on top of BSE building has toppled due to heavy wind and incessant rainfall. Ashish Chauhan, chief executive officer, BSE, in a tweet said the exchange is seeking the help of fire brigade to ensure that the signage doesn’t fall to the ground and injure any one or create property damage for anyone.

More than 230 mm of rainfall recorded in Mumbai city in the last 10 hours, according to Brihanmumbai Municipal Corporation pic.twitter.com/JVhEWcICvK