Mumbai rains updates: The situation in Raigad and Ratnagiri districts of Maharashtra remains grim as water-level in some rivers reached the warning level. Maharashtra Chief Minister Eknath Shinde has directed district collectors of the two districts to take precautions in the wake of heavy rains there.

The India Meteorological Department (IMD) has predicted moderate to heavy rain in Mumbai and suburbs on Tuesday. There are also possibility of very heavy rainfall at isolated place, the weather department said. An 'orange' alert has also been issued for parts of Maharashtra including Mumbai, Palghar, Thane and Pune. Meanwhile, a 'red' alert has been sounded in Kolhlapur, Satara, Raigad, Ratnagiri and Sindhudurg on Tuesday. 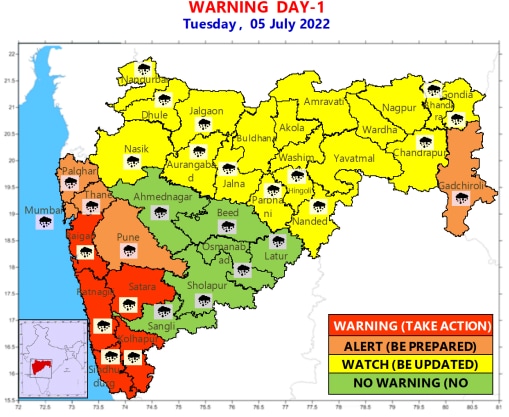 Maharashtra rain update (Image: IMD)
Several streets were waterlogged after heavy rainfall in the Mumbai and a landslide was reported in Ghatkopar of Panchsheel Nagar in the city on Tuesday. Khandeshwar Railway Station was inundated amid heavy rains in Navi Mumbai as commuters struggled to wade through water. Waterlogging was also witnessed in the Sion area of Mumbai.

Maharashtra | Waterlogging in the Sion area of Mumbai in the wake of heavy rains in the city pic.twitter.com/HCEhnDrc7M

Here are the latest weather updates from Maharashtra and other parts of country
Maharashtra rain updates:
> Train services hit: The Chief Public relations officer said, "15066 Panvel-Gorakhpur Express sch dep 15.50 hrs on 5.7.2022 is RESCHEDULED at 22.00 hrs on 5.7.2022 due to Up train running late."
> The IMD issued 'orange' alert in Mumbai. Extremely heavy rain are likely to occur at isolated places in Mumbai, the IMD said. The alert has been issued till June 9.
> Two NDRF teams deployed in Kolhapur
> Eknath Shinde is likely to visit BMC’s disaster control room at 4 pm to take stock of the preparedness.
> More routes diverted in Mumbai

The following #BEST routes have been diverted:

> The IMD updated its alert for Mumbai and nearby areas. "Moderate to heavy rain in city and suburbs. Possibility of very heavy rainfall at isolated places," the IMD said. As per the weather department, Konkan belt (South and North) and central Maharashtra are on 'orange' alert till July 9.
> The Kundalika River has crossed the warning level and the water level of Amba, Savitri, Patalganga, Ulhas and Garhi rivers is slightly below the warning level.
> Maharashtra Chief Minister Eknath Shinde directed officials to monitor the situation and keep the National Disaster Response Force (NDRF) squads ready. Shinde held a discussion with Chief Secretary Manukumar Srivastava along with directing all the related districts' guardian secretaries to stay alert and control the situation.
> According to reports, there's a flood-like situation in Amravati.
> "Isolated heavy to very heavy rainfall and thunderstorm/lightning very likely over Gujarat State, Konkan and Goa, Madhya Maharashtra, Coastal Andhra Pradesh and Yanam, Telangana, Coastal and South Interior Karnataka, Kerala and Mahe during next five days," IMD says
> A landslide was reported in Ghatkopar, Panchsheel Nagar in Mumbai amidst the heavy rains on Tuesday. "Fire vehicles reaching on the spot. No casualties reported so far," a Mumbai Fire Brigade official said. A house was  damaged in the incident.

The following #BEST routes have been diverted:

> The situation in Raigad and Ratnagiri remains grim as water-level in some rivers reached the warning level. According to the Chief Minister's Office, Maharashtra Chief Minister Eknath Shinde has directed district collectors of the two districts to take precautions in the wake of heavy rains there.

Visuals from Andheri Subway show severe waterlogging in the aftermath of heavy rains lashing the city.

#WATCH | Maharashtra: Mumbai wakes up to severe waterlogging in the aftermath of heavy rains lashing the city.

Karnataka rain update:
Heavy and incessant rainfall disrupted normal life in parts of Karnataka on Tuesday. Holidays were announced for educational institutions, News 18 reported. Meanwhile, a schoolgirl was washed away by floods while returning home from school in Thogarihankal Gram Panchayat limits in Chikkamagalur districton on Monday. The search for the girl has resumed. The girl was returning home with her elder brother and friends.
Madhya Pradesh rain updates:
> The IMD also predicted moderate to heavy rainfall in parts of Madhya Pradesh for the next two days. Heavy rainfall is expected in 15 districts within the next 24 hours, according to Met officials in Bhopal. Heavy to very heavy rainfall is also likely in Chhattisgarh, Goa, Karnataka and Kerala.
The weather department had earlier said active monsoon conditions are likely to prevail over central India and along the west coast during the next five days and over northwest India between July 5 and 7. The southwest monsoon had covered the entire country on July 2, 2022, the IMD said.
(Edited by : Akriti Anand)
Tags
next story