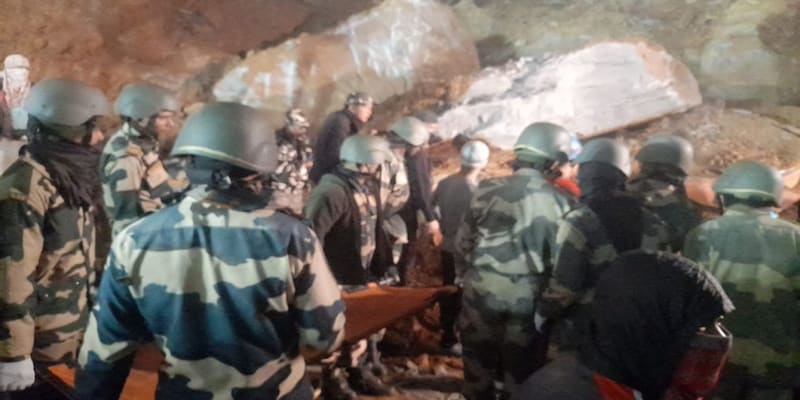 Mizoram: The Hnahthial Superintendent of Police (SP) said that 13 people were working when a massive landslide occurred at the stone quarry and only one labourer managed to escape from the spot.

As many as 11 people died after a stone quarry collapsed in South Mizoram’s Hnahthial district, an official said on Wednesday. The incident happened around 2.40 pm on November 14 when the workers were working at the site, the district administration said. Of the diseased, five are from West Bengal, two each from Jharkhand and neighbouring Assam and one from Mizoram’s Lunglei district, he was quoted by PTI as saying.

A total of 12 people were confirmed to have been trapped after the stone quarry caved in at Maudarh village on Monday. A search operation is underway to find missing people.

Hnahthial Superintendent of Police (SP) Vineet Kumar had said that 13 people were working when a massive landslide occurred at the stone quarry and only one labourer managed to escape from the spot.
Hnahthial district Deputy Commissioner R Lalremsanga said, “Two more bodies have been recovered from the debris on Tuesday night after an intense search operation. With these recoveries, 10 of the 12 people trapped under the debris of the stone quarry have been found." Of the 12 missing persons, 11 have been traced, Lalremsanga said.
Prime Minister Narendra Modi expressed grief over the deaths and announced an ex-gratia of Rs 2 lakh from PMNRF to the next of kin of each deceased. "Injured to be given Rs 50,000 each," the Prime Minister's Office (PMO) said.

My thoughts are with those who lost their loved ones due to the tragic stone quarry collapse in Mizoram. An ex-gratia of Rs. 2 lakh would be given from PMNRF to the next of kin of each deceased. The injured would be given Rs. 50,000: PM @narendramodi

What caused the stone quarry collapse
According to PTI, witnesses to the incident claimed that workers had dug too deep and had upset the stability of the stone quarry, resulting in the collapse.
Lalremsanga had said that five earth excavators, a stone crusher and a drilling machine were also completely buried under the debris. He said the area impacted by the landslide is approximately 5,000 square metres.
The stone quarry is owned by ABCI Infrastructures Pvt Ltd, a construction company, which employed the workers. The company has been executing the widening of a section of the national highway between Hnathial town and Dawn village.
In another incident, as many as 11 people died after a tanker lorry carrying 22,000 litres of petrol caught fire, Mizoram police said early Wednesday. The incident happened within the vicinity of Tuirial Airfield.

Mizoram | A total of eleven died in a fire incident after a tanker lorry carrying 22,000 litres of petrol met with an accident within the vicinity of Tuirial Airfield & people gathered to collect the spilling petrol from the tanker: Mizoram police https://t.co/IM3olNjWy9

NGT files suo-moto case
The National Green Tribunal (NGT) registered a suo-moto case in connection with the incident and directed authorities concerned to appear before it on November 28. PTI quoted District Superintendent of Police (SP) Vineet Kumar said that suo-moto case into the incident has also been filed at Hnahthial police station.
Seven officials, including the member secretary of Mizoram pollution control board and the director of the state's disaster management directorate, have been asked to appear at the tribunal's Faridkot House office in Delhi, according to the notice issued by the NGT on Wednesday.
(With inputs from PTI)
Check out our in-depth Market Coverage, Business News & get real-time Stock Market Updates on CNBC-TV18. Also, Watch our channels CNBC-TV18, CNBC Awaaz and CNBC Bajar Live on-the-go!