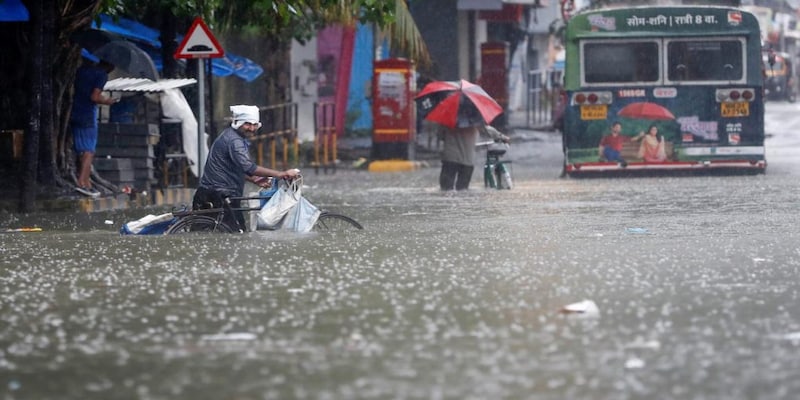 The IMD has predicted an intense spell of rainfall over Gujarat, north Konkan, north-central Maharashtra and Marathwada during the next two days in association with the well-marked low-pressure area over western parts of Vidarbha.

After bringing intense rainfall over the eastern coast and central India, Cyclone Gulab weakened into a low-pressure area on Tuesday, but it is again likely to intensify further after reaching the western coast, the India Meteorological Department (IMD) said. The depression over southwest Vidarbha and neighbourhood moved west-northwestwards and weakened into a well-marked low-pressure area on Tuesday, the Cyclone Warning Division of the IMD. It is likely to move northwestwards and weaken gradually during the next 24 hours.

"The system is likely to emerge into the northeast Arabian Sea and adjoining Gujarat coast around September 30 and there is a likelihood for the system to further intensify over the northeast Arabian Sea during the subsequent 24 hours (Wednesday)," the CWD added. There is a possibility that the system may intensify into a cyclone as it reaches the Arabian Sea. The emergence of the remnant system into the North Arabian Sea and its chances of further intensification are being closely monitored, it added.
Cyclone Gulab hit the Odisha and Andhra Pradesh coast on September 26. It started weakening after the landfall but brought intense rainfall activity over Telangana, Chhattisgarh, Marathwada and Vidarbha regions of Maharashtra. The IMD has predicted an intense spell of rainfall over Gujarat, north Konkan, north-central Maharashtra and Marathwada during the next two days in association with the well-marked low-pressure area over western parts of Vidarbha.
It also predicted intense spell of rainfall over Gangetic West Bengal, Odisha and Jharkhand during the next two days in association with a well-marked low-pressure area over Northwest Bay of Bengal and adjoining coastal areas of West Bengal.
Check out our in-depth Market Coverage, Business News & get real-time Stock Market Updates on CNBC-TV18. Also, Watch our channels CNBC-TV18, CNBC Awaaz and CNBC Bajar Live on-the-go!