Low pressure area formed over Arabian Sea likely to intensify into cyclonic storm; to move towards Maharashtra, Gujarat by June 3

Low pressure area formed over Arabian Sea likely to intensify into cyclonic storm; to move towards Maharashtra, Gujarat by June 3 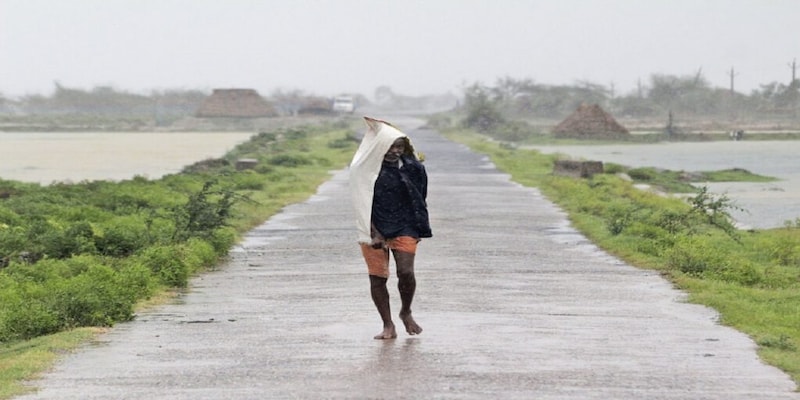 A low-pressure area is formed into the Arabian sea which might develop into a cyclonic storm and could move towards the coasts of Maharashtra and Gujarat by June 3, a Met statement said on Sunday.

A low-pressure area is formed into the Arabian sea which might develop into a cyclonic storm and could move towards the coasts of Maharashtra and Gujarat by June 3, a Met statement said on Sunday.

"A low-pressure area has formed over the southeast and adjoining east-central the Arabian Sea and Lakshadweep area with associated cyclonic circulation extending up to mid-troposphericlevels," the regional Meteorological Centre, Mumbai, said in a tweet.
If the storm does get classified as a cyclone it will be named Nisarga as per IMD's new list of upcoming cyclones in the Indian Ocean.
The met department said the low-pressure area might turn into a depression and then into a cyclonic storm, which is "very likely to move nearly northwards and reach north Maharashtra and Gujarat coasts by June 3".
"It is very likely to concentrate into a depression over east-central and adjoining southeast Arabian Sea during the next 24 hours," it said.
The arrival date for monsoon in Kerala is around June 1 every year and in Maharashtra around June 10.
On Saturday, a private forecasting agency claimed that monsoon has already hit Kerala, but the assertions were quickly rebutted by the Ministry of Earth Sciences.
"The news about monsoon onset over Kerala in Social Media is not correct. Monsoon has not arrived over Kerala. The greatest enemy of knowledge is not ignorance, it is the illusion of knowledge a"Stephen Hawking," said Madhavan Rajeevan, Secretary, Ministry of Earth Sciences.
Kuldeep Srivastava, the head of IMD's Regional Weather Forecasting Centre said that the formation of a low-pressure system in the Arabian Sea and its movement towards the Gujarat coast will bring moisture to Delhi-NCR and northwest India from June 3.
Two storms are forming over the Arabian Sea, one lies off the African coast and is likely to move over Oman and Yemen, while the other is placed close to India.
The development comes almost ten days after 'Amphan' pummeled four districts of Bengal in the fiercest cyclone in the region in a century, that left 86 people dead and rendered ten million people homeless.
(With inputs from PTI & IANS)
Check out our in-depth Market Coverage, Business News & get real-time Stock Market Updates on CNBC-TV18. Also, Watch our channels CNBC-TV18, CNBC Awaaz and CNBC Bajar Live on-the-go!