Kartarpur Sahib Corridor reopens ahead of Guru Purab: All you need to know

Kartarpur Sahib Corridor reopens ahead of Guru Purab: All you need to know 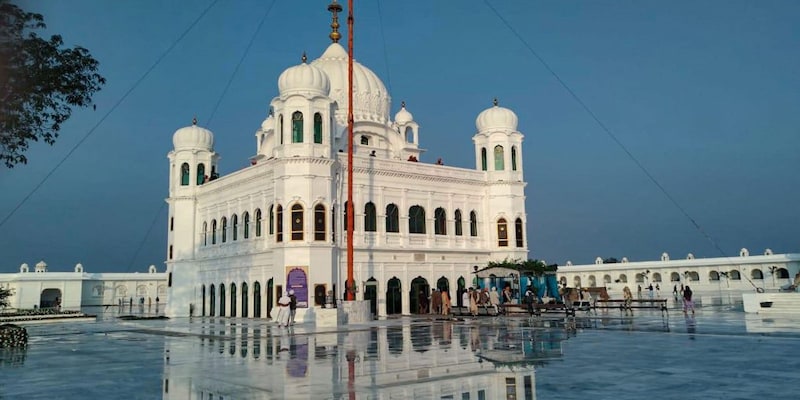 The Kartarpur Corridor was finally opened in 2019 for the 550th celebrations of the birth of Guru Nanak, the first Guru and founder of Sikhism.

The Kartarpur Sahib Corridor between India and Pakistan was reopened on Wednesday, two days before Guru Purab, the birth anniversary of Guru Nanak Dev. The corridor was closed in March 2020 as the COVID-19 pandemic called for restrictions on international movement.

Home Minister Amit Shah announced the government's decision over Twitter. “In a major decision, that will benefit large numbers of Sikh pilgrims, PM Narendra Modi government has decided to re-open the Kartarpur Sahib Corridor from tomorrow, November 17. This decision reflects the immense reverence of the Modi government towards Shri Guru Nanak Dev Ji and our Sikh community,” Shah had tweeted on Tuesday.

In a major decision, that will benefit large numbers of Sikh pilgrims, PM @Narendramodi govt has decided to re-open the Kartarpur Sahib Corridor from tomorrow, Nov 17.
This decision reflects the immense reverence of Modi govt towards Shri Guru Nanak Dev Ji and our Sikh community.

Sikh leaders had been calling for the opening of the corridor since last year as the pandemic receded. Punjab Chief Minister Charanjit Singh Channi, Punjab Congress chief Navjot Singh Sidhu, former Punjab CM Amarinder Singh, BJP national general secretary Tarun Chugh and Shiromani Akali Dal chief Sukhbir Singh Badal lauded the government’s move.
Navjot Sidhu called the move a "welcome step" and an "invaluable gift" in a tweet.
“My profound gratitude to Prime Minister Narendra Modi and Home Minister Amit Shah for the timely opening of the Kartarpur Sahib Corridor. It will provide a chance to thousands of devotees to pay obeisance at the holy shrine on the occasion of Guru Purab of Guru Nanak Dev Ji,” added former Punjab Chief Minister Captain Amarinder Singh.
The Kartarpur Corridor
The 4.4 km corridor connects Gurdwara Darbar Sahib in Pakistan to the India-Pakistan border. The border allows visa-free travel for Indian Sikhs to the Pakistani side and back, though Pakistani Sikhs cannot use the corridor without an Indian visa if they are not employed in India.
Gurdwara Darbar Sahib Kartarpur is an important place of worship for the Sikh community and is one of the three holiest sites in the religion. The other two are the Golden Temple in Amritsar and the Gurdwara Janam Asthan in Nankana Sahib, in Pakistan. The shrine is visible from the Indian side, as a raised platform has been constructed for pilgrims who want to offer prayers.
Guru Nanak Dev, the founder of Sikhism, settled at the site of the modern gurdwara in 1515 after his udasis (missionary travels) to Haridwar, Mecca-Medina, Lanka, Baghdad, Kashmir and Nepal. Guru Nanak spent the last 18 years of his life at Kartarpur Sahib, spending his time farming, running a community kitchen and assembling the first Sikh communities. The shrine is among the largest gurudwaras in the world and some claim it houses the last original copy of the Guru Granth Sahib.
Visa-free corridor
The Kartarpur corridor was opened in November 2019, after a year of work. While talks about a visa-free corridor had first initiated in 1999 between then Prime Minister Atal Bihari Vajpayee and Pakistani Prime Minister Nawaz Sharif and later President General Pervez Musharraf, tensions sparked by the Kargil War destroyed any chances of the corridor being constructed.
In 2017, the parliamentary standing committee on external affairs had ruled out cooperation with Pakistan to construct a corridor to Kartarpur Sahib. In 2018, then Punjab Tourism Minister Navjot Singh Sidhu had attended the oath-taking ceremony of friend and former competitor, the newly elected Prime Minister of Pakistan, Imran Khan, where General Qamar Javed Bajwa, Chief of the Pakistan Army, assured Sidhu of Pakistan's intention to open the corridor between the two nations.
Just a month later, Pakistan unilaterally announced that it would be opening a corridor between the two countries to allow visa-free travel to the shrine. A year later, the Kartarpur corridor was finally opened in a rare show of cooperation between the regional rivals.
"The inauguration of Kartarpur Corridor is a manifestation of the fact that our hearts are always open for the followers of different religions as enjoined by our great religion and envisioned by our Father of the Nation. Today we are not only opening borders but also our hearts for the Sikh community," PM Khan had said.
"I would like to thank the Prime Minister of Pakistan, Imran Khan, for respecting the sentiments of India. I thank him for his cooperation," PM Modi had responded.
COVID-19 rules
All pilgrims will have to carry a negative RT-PCR report, not older than 72 hours prior to arrival, and Covid-19 vaccination certificates. They will also have to take a Rapid Antigen Test (RAT) upon their arrival in Pakistan and anyone with COVID-19 symptoms will be moved to isolation, India Today reported.
Check out our in-depth Market Coverage, Business News & get real-time Stock Market Updates on CNBC-TV18. Also, Watch our channels CNBC-TV18, CNBC Awaaz and CNBC Bajar Live on-the-go!