The India Meteorological Department (IMD) issued a yellow alert in Palghar, Nasik, Pune, Amravati and Gadvhiroli among other areas. Meanwhile, "light to moderate rainfall/thunderstorm' s likely at several places in Uttarakhand. Here's a look at rain predictions across India on Monday.

Rajasthan continued to receive heavy rainfall at a few places in its eastern parts while many places in the state witnessed light to moderate rains. Meanwhile, a yellow alert has been issued in parts of Maharashtra on Monday. Rainfall is also likely in other parts of the country. Here's a look at rain predictions across India on Monday. 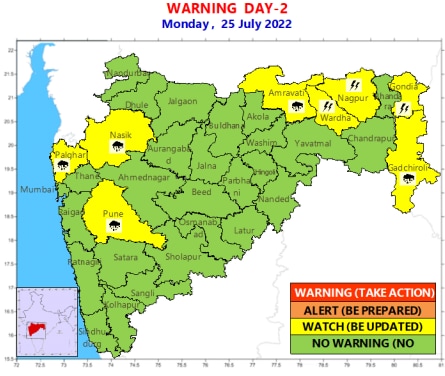 IMD's rain alert in parts of Maharashtra
Kolkata
The weatherman forecast a cloudy sky with one or two spells of rain in Kolkata on Monday. The MeT predicted heavy rainfall in Purba and Paschim Medinipur till Monday, while the other south Bengal districts are likely to experience thunderstorms with lightning at one or two places. Heavy rainfall is also likely till Monday in the sub-Himalayan districts of Darjeeling, Kalimpong, Jalpaiguri, Cooch Behar and Alipurduar.
Delhi
No warning has been issued for Delhi on Monday. However, "generally cloudy sky" is likely to prevail over the national capital. Light to moderate rainfall is likely in parts of the city.
Chennai
The IMD predicted on Sunday that "light to moderate rain at a few places with isolated thunderstorm and lightning is likely to occur over Tamil Nadu, Puducherry and Karaikal area" on Monday.
Himachal Pradesh
"Generally cloudy sky with possibility of light rain at isolated places" has been predicted in all the areas in Himachal except Kinnaur and Lahaul-Spiti districts. After heavy rainfall through the night, the water levels of the Beas river flowing next to Manali in Himachal Pradesh rise.

#WATCH | After heavy rainfall through the night, the water levels of Beas river flowing next to Manali in Himachal Pradesh rise. Visuals from Vashisht Chowk of Manali pic.twitter.com/1GbjG8C45U