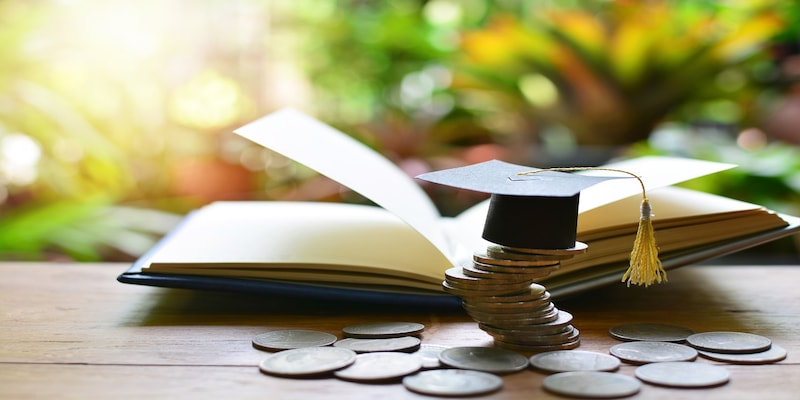 Many parents and students dream of moving abroad for higher studies but seldom do many of them fail to gather enough funds to give wings to the dream. Most top colleges overseas require a huge amount for a student’s entry into a top university, unless he or she manages to get a scholarship, but the high living cost still remains a concern.

While students enjoy their summer break, the rising cost of education (apart from food, fuel, and others) has parents worried across rural and urban pockets of India. After remaining relatively low during the first and second waves of the COVID-19 pandemic, education inflation is picking pace. This has led to parents' concerns about whether they will be able to manage funds for their children’s higher studies and their dream college.

The pandemic and now
The education inflation rate in India was 0.63 percent in April 2021 and 1 percent in May 2021, but has increased to 4.12 percent and 4.09 percent (provisional) in the corresponding months of 2022, respectively, according to the Ministry of Statistics and Programme Implementation. This is as schools have reopened nationwide with the pandemic waves ebbing.
May Consumer Price Index (provisional) for education across the country was 167.8 points as compared to the base year 2012, for which the index is taken at 100. 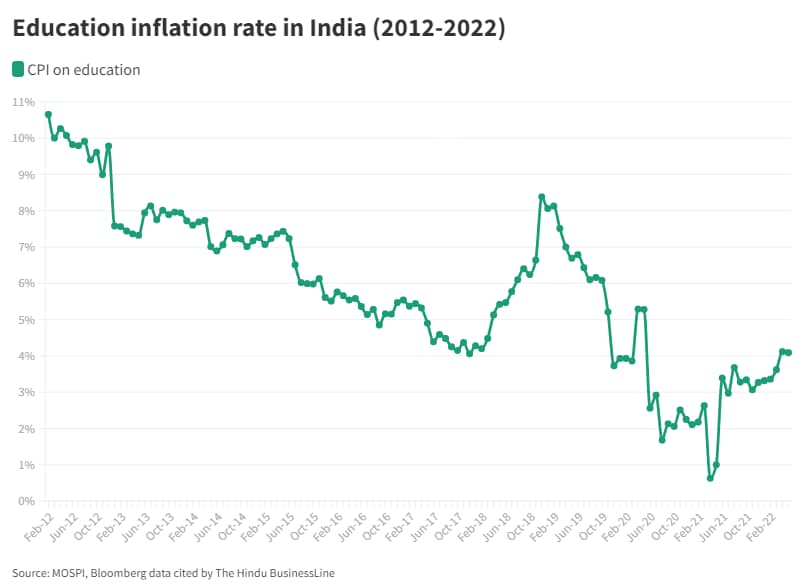 The rise in the cost of education cannot alone be attributed to increased tuition fees. There are several other factors including the overall higher cost of living, tuition fees, administration costs, security, modern school infrastructure, and technological updates by educational institutions. Moreover, there is the additional rising fuel cost, which adds to transportation charges, and also food costs.
Also Read: India's private school aspiration increasingly out of reach as inflation bites
According to National Sample Survey data cited by The Hindu BusinessLine, the increase in the cost of primary and upper primary education was higher — rising by 30.7 percent and 27.5 percent, respectively, between June 2014 and June 2018, i.e. when CPI inflation on education was rising.
The increase was comparatively lower for higher education. The fees for graduate courses rose by a 5.8 percent hike and by 13.19 percent for post-graduate and higher courses.
Higher education
According to data cited by EduFund co-founder Eela Dubey in an article for Moneycontrol.com, tuition fees of colleges in India have risen by huge amounts over the years and are only expected to go up. 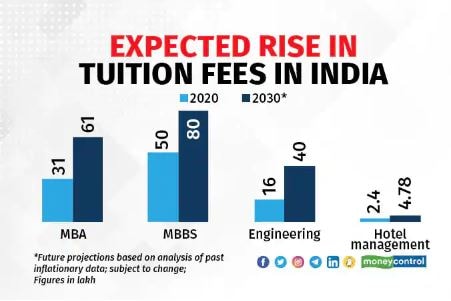 As education costs go up, nearly 39 percent of students in the 20-24 age group drop out of college to help their families increase household income, according to recent data by the Unified District Information System for Education.
Overseas education
Many students dream of moving abroad for higher studies but seldom do many gather enough funds to give wings to that dream. Most top colleges overseas require a huge amount for a student’s entry, unless he or she manages to get a scholarship. Even then high living cost remains a concern.
Akshay Chaturvedi, founder and CEO of Leverage Edu, is of the view that the cost of education has increased over the years but that it is not unjustified, at least in global universities. “We are talking about upgradation, in not just infrastructure and quality of the curriculum, but also rapid change in delivery, research facilities, and quality of faculty,” he told CNBCTV18.com.
Also Read | View: The need to bridge gap between institutional learning and corporate expectations
UK and Australian universities, in particular, have the most merit and need-based scholarships for students in India. He believes it's a more subjective lens to look from to see what the average international tuition is, based on the country of origin.
Foreign education is fast becoming a common thing with even the middle class. "While meritorious students do not have so much of an issue going abroad as their education is normally sponsored by way of scholarships, those who cannot make it need their parents to provide for it," said Vikas Singhania, CEO, TradeSmart.
How parents can start saving early to counter education inflation
For compounding of wealth to work its magic, it needs time and rate of return. So, starting saving when the child is young gives the parent the advantage of time and regular investment in equities will give them the required returns to achieve their goal, according to Singhania.
“Regular monthly savings in a higher-yielding asset like equity can help meet the target. If a parent starts a SIP of Rs 10,000 per month at the time of a child's birth, then by the age of 15, they would have Rs 45.28 lakh if invested in the equity market, yielding around 12 percent per annum during this period,” he explained.
Also Read: How education will change in the metaverse
Chaturvedi of Leverage Edu, meanwhile, thinks one can't go wrong with investing in varied asset classes with different risk factors early in life, but low-cost non-collateral (read unsecured) education loans are a healthy instrument that a lot of Indian students still opt for.
“There is nothing wrong with planning early and saving for your or your child's education, but the reality is that not everyone can really do that. Every student looks at an education loan from an investment perspective, an investment in their future. So, an ROI is important,” he said.
Check out our in-depth Market Coverage, Business News & get real-time Stock Market Updates on CNBC-TV18. Also, Watch our channels CNBC-TV18, CNBC Awaaz and CNBC Bajar Live on-the-go!