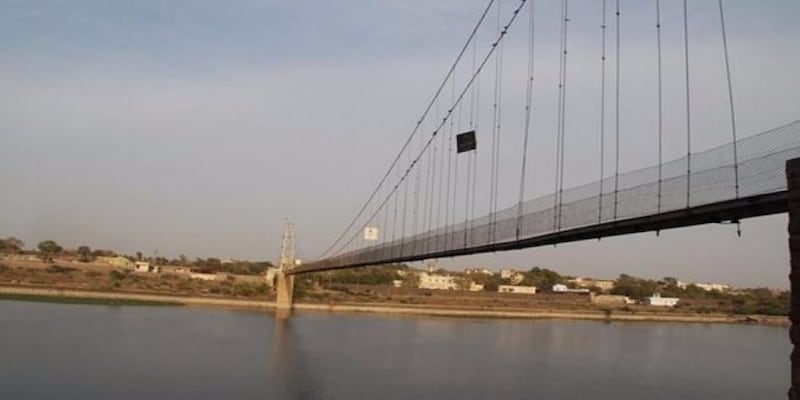 The century-old suspension bridge over the Machchhu river in Morbi town of Gujarat collapsed on Sunday evening at around 6.30 pm, killing nearly 132 people

The death toll in the Morbi suspension bridge collapse in Gujarat rose to over 140 on Monday even as one team of the Air Force, two columns of Army, two teams of Indian Navy, five teams of NDRF, six platoons of SDRF, and local people continued rescue operations through the night.

The century-old suspension bridge over the Machchhu River in Morbi town of Gujarat collapsed on Sunday around 6.30 pm. The bridge, which lies at a distance of 230 m from Gandhinagar, re-opened on October 26 after being closed for about seven months for extensive repairs and renovation.
Gujarat Chief Minister Bhupendra Patel visited the site where the tragic incident took place on Sunday night and took stock of the rescue operation.
More than 400 people were believed to be on and around the footbridge when it collapsed, Reuters reported quoting officials.
ALSO READ:
Morbi bridge collapse LIVE Updates: PM Modi assures 'there will be no laxity' in relief and rescue operation
History of the bridge
The 230-metre historic Morbi suspension bridge was first inaugurated on February 20, 1879, by then-Mumbai Governor Richard Temple.
It is believed that the bridge was built on the lines of the Ram and Lakshman Jhulas on the Ganga in Uttarakhand by Morbi’s former ruler Sir Waghji Thakor. Inspired by the Britishers, Sir Waghji, who ruled Morbi till 1922, built the bridge to reflect "the progressive and scientific nature of the rulers of Morbi", the district collectorate website said.
It used the latest technology available in Europe at those days. The material for the construction of the bridge came from England and cost Rs 3.5 lakh at the time, FirstPost reported.
The bridge connected Darbargadh Palace with Nazarbag Palace, these were the residences of the then-royal families. The bridge is 1.25 m wide and spans 233 m on the Machchhu River.
ALSO READ: Morbi bridge collapse: Toll rises to over 140, probe on
In 2001, the bridge suffered severe damage during the earthquake.
Renovation
The Morbi municipality signed a Memorandum of Understanding (MoU) with a private firm Oreva Group earlier this year for the operation and maintenance of the bridge for 15 years. In March, the bridge was closed for renovation.
Even though the bridge was opened after the completion of the renovation work on October 26, it had not been issued any fitness certificate by the local municipality, news agency PTI quoted the chief officer of Morbi municipality Sandeepsinh Zala as saying.
(Edited by : Sudarsanan Mani)
Check out our in-depth Market Coverage, Business News & get real-time Stock Market Updates on CNBC-TV18. Also, Watch our channels CNBC-TV18, CNBC Awaaz and CNBC Bajar Live on-the-go!