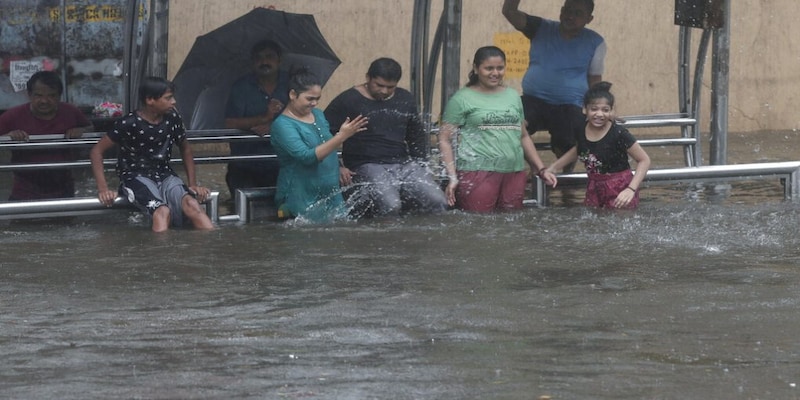 The India Meteorological Department (IMD) has forecast -- extremely heavy rains -- at a few places in Marathwada, Mumbai and other parts of the coastal Konkan region of Maharashtra in the next 24 hours.

At least 13 persons died in heavy showers, floods and lightning in parts of Maharashtra with the Marathwada region bearing the brunt of rain fury. More than 560 people were rescued after the NDRF was mobilised and helicopters were deployed, officials said on Tuesday. Besides, more than 200 cattle perished or were washed away and a number of houses were damaged in torrential rains that lashed Marathwada on Sunday and Monday, causing havoc in a region that is considered a perennially drought-plagued area, they said.

Parts of the region and Mumbai received heavy showers on Tuesday also. The India Meteorological Department (IMD) has forecast -- extremely heavy rains -- at a few places in Marathwada, Mumbai and other parts of the coastal Konkan region of Maharashtra in the next 24 hours.
The Marathwada region in central Maharashtra which faced rain fury comprises eight districts -- Aurangabad, Latur, Osmanabad, Parbhani, Nanded, Beed, Jalna and Hingoli. Heavy rainfall in catchment areas of the Manjara dam forced authorities to open all 18 gates of the reservoir to discharge water on Tuesday, which led to flooding in some villages in Beed district, while an alert was sounded in some neighbouring districts, the officials said.
The local administration opened all 18 gates of the Manjara dam and 11 gates of the Majalgaon dam, resulting in the discharge of 78,397-80,534 cusec water from them, respectively, they said. An official from the disaster management department said in Mumbai that 13 people have died due to heavy rains and lightning in parts of Maharashtra, while 136 others have received injuries.
Of these 13 deaths, 12 were reported from Marathwada and Vidarbha regions and one from North Maharashtra's Nashik district, the official said. Of the 12 deaths, three were reported from Yavatmal district (in Vidarbha where a bus was swept away), two each from Beed, Osmanabad, Parbhani (Marathwada) and one each from Jalna, Latur (Marathwada) and Buldhana (Vidarbha), he said.
In Nashik district, a lightning strike killed one person and injured four others, the official said. Three persons died after a state transport bus was swept away while crossing an inundated bridge in Yavatmal district on Tuesday morning, officials said.
The incident took place around 8 am at Dahagaon bridge in Umarkhed tehsil when the semi-luxury bus of the Maharashtra State Road Transport Corporation (MSRTC) was going from Nagpur to Nanded. The bus got swept away while passing through the bridge which was flooded following heavy rains, and then overturned, an official said.
There were four passengers in the bus besides the driver and conductor, Umarkhed tehsildar Anand Deolgaonkar said. In a late night release, the Yavatmal district administration said bus passengers Sharad Fulmali (27) and Subramanyam Tokla (48) were rescued.
But three others, Sheikh Salim alias Babu Sheikh Ibrahim (50), a resident of Hyderabad, Indal Mahindre (35), a resident of Pusad in Yavatmal district, and conductor Bhimrao Nagrikar, a native of Nagpur, died and their bodies were recovered, it said. Bus driver Suresh Surewar was still missing, it said. With this, 434 people have been killed in rain-related incidents in the state since June 1, the disaster management department official said in Mumbai.
A total of 205 animals, including 60 large milch animals, were washed away or perished in the heavy rains over the last two days. "With this, the total loss of livestock, including cows, buffaloes and goats, has increased up to 1,632. As many as 91,510 poultry birds are also estimated to have died in heavy rains (both figures since June 1), the official said.
The heavy rain and flood have damaged crops on several acres of agricultural land in the region, he said. "Since yesterday (Monday), the Water Resources Department has been monitoring the situation closely. We are trying to minimise the damage," Water Resources Minister Jayant Patil told reporters in Beed.
The administration will provide all possible relief to people, the minister said. National Disaster Response Force (NDRF) teams and choppers were deployed in parts of Marathwada to rescue stranded people. One team of the State Disaster Response Force has also been deployed in the Jalgaon district in North Maharashtra, the official said.
A total of 564 people were rescued from rain and flood-hit areas in different districts. As many as 459 people were rescued from flood-affected areas in the last 48 hours across Osmanabad district and the NDRF deployed a helicopter to reach those stranded in floodwaters, officials said on Tuesday evening.
Six persons, including two children, were rescued by the NDRF by deploying a helicopter at Dautpur village in Osmanabad tehsil, while 10 persons were evacuated from Saundane Amba village in Kalamb tehsil. The Osmanabad-Ausa road was blocked as the water was flowing over the Kamegaon-Samudrawani bridge.
The Manjara dam was filled to the capacity which necessitated the opening of 18 gates of the dam, an official said. Twenty persons were rescued from a house in Wakadwadi village of Kalamb tehsil. Some 125 persons were rescued in Ramwadi, 114 in Irla, 35 each in Ter and Borkheda and 90 in Dautpur, the official said.
Two teams of NDRF participated in the rescue operations. The collector of neighbouring Latur district, Prithviraj BP, told.
Check out our in-depth Market Coverage, Business News & get real-time Stock Market Updates on CNBC-TV18. Also, Watch our channels CNBC-TV18, CNBC Awaaz and CNBC Bajar Live on-the-go!