Heavy rain in Chennai brings city to a halt; holiday declared in 23 districts of Tamil Nadu

Heavy rain in Chennai brings city to a halt; holiday declared in 23 districts of Tamil Nadu 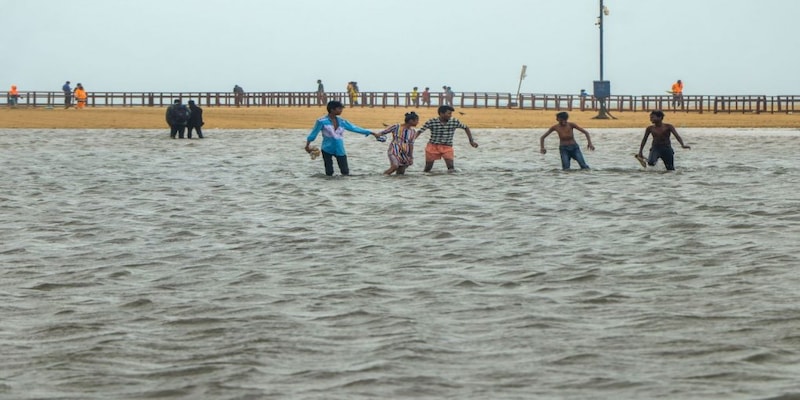 Schools and colleges have been shut in Chennai and 22 other districts after heavy rains on Friday.

Heavy overnight rainfall has waterlogged parts of Chennai on Friday. Schools and colleges in Chennai and 22 other districts will remain closed on November 12. The holiday was declared late last night. The 23 districts include Chennai, Kanchipuram, Ranipet, Vellore, Thiruvallur, Villupuram, Thiruvarur, Mayiladuthurai and Nilgiris.

This is the second time schools and colleges have been shut in Chennai in November.
While the overnight rain on Friday inundated the northern part of the city, the southern and central parts, including T-Nagar and Velacherry did not face any issues thanks to the new storm-water drains built over the last seven months.

Tamil Nadu | Due to heavy rains, holiday has been declared in schools and colleges in Chennai, Kanchipuram, Ranipet, Vellore, Thiruvallur, Villupuram, Thiruvarur, Mayiladuthurai, Nilgiris on Nov 12.

The India Meteorological Department (IMD) has predicted moderate to heavy rain with thunderstorms and lightning likely to occur in Tamil Nadu, Puducherry and Karaikal area over the next three days.
The heavy rain spell comes just 10 days after the city recorded its heaviest rainfall in more than 30 years on November 1. Since October 31, at least 26 people have died in rain-related incidents, BBC reported.
Authorities are on high alert as parts of the city have been submerged in water with more heavy rains expected in the coming days.
ALSO READ:
Schools shut in UP and Tamil Nadu due to heavy rains, snowfall in Himachal — IMD alert in these states today
Visuals showed roads completely submerged in the Pulianthope locality of north Chennai and people navigating in ankle-deep water.  An average of 64.5mm of rainfall was recorded in Chennai till 8:30 am on Friday, as per an NDTV report. The weather office has predicted heavy rainfall in parts of the state following which the authorities have set up 5,093 relief camps, including 169 in Chennai.
As many as 879 drainage pumps have been deployed in low-lying areas while 60 monitoring officers have been put in charge of the affected districts.
Over 2,000 relief personnel are on standby from both the central and the state disaster response forces.
As per the IMD prediction, rainfall is likely to occur in most places in Tamil Nadu, Puducherry, and Karaikal area in the next three days and in the next 24 hours, areas of Cuddalore and the Delta districts are likely to receive extremely heavy rainfall.
ALSO READ: IMD warns of heavy rainfall in Andhra, Tamil Nadu, Puducherry and Telangana as monsoon retreats
Some of the areas in Tiruvallur, Kancheepuram, Ranipet, Chengalpet, Tiruvannamalai, Villupuram, Kallakurichi, Tirupathur, Krishnagiri, Salem, and Dharmapuri districts are likely to receive heavy to very heavy rainfall, S Balachandran, deputy director general of meteorology, said according to an Indian Express report.
It has been seven years earlier since devastating floods killed more than 400 people in Chennai, and according to the authorities the rains are not only becoming more frequent, but more unpredictable.
(Edited by : Sudarsanan Mani)
Check out our in-depth Market Coverage, Business News & get real-time Stock Market Updates on CNBC-TV18. Also, Watch our channels CNBC-TV18, CNBC Awaaz and CNBC Bajar Live on-the-go!