Updated : March 20, 2021 04:41 PM IST
The United States of America ruled the roost as the world’s largest exporter of arms between 2016 and 2020
Among importers, Saudi Arabia beat its counterparts to be the leading recipient of arms for the same period

The United States of America remained the world’s largest exporter of arms for the period between 2016 and 2020, accounting for 37 percent of the world’s total arms trade. A report by The Stockholm International Peace Research Institute (Sipri) revealed that the US supplied arms to 96 countries in the aforementioned time period.

Following the USA on the list is Russia at 20 percent. Countries such as France, Germany and China came in at third, fourth and fifth spots, respectively.

The report also found Saudi Arabia, at 11 percent, to be the world’s largest importer of arms, followed by India, Egypt, Australia and China.

Who are the largest exporters? The US held on to its top position, thanks to imports from Saudi Arabia that contributed to 24 percent — nearly a quarter — of the country’s arms exports. Following Saudi on the list of recipients of US’ arms are Australia at 9.4 percent and South Korea at 6.7 percent.

Russia managed to maintain its second position despite a 22 percent drop in exports in the said time period. A major reason for the drop in Russia’s exports was attributed to a contraction in its business with India. However, India continues to account for 23 percent of Russia’s arms sale. China at 18 percent and Algeria at 15 percent are Russia’s next most coveted customers. France witnessed tremendous growth of 44 percent in its overall arms export, accounting for an 8.2 percent share of the global market between 2016 and 2020. India with 21 percent, Egypt with 20 percent and Qatar with 18 percent remained its top three clients.

Germany came fourth on the list with a 5.5 percent share in the global arms market with South Korea at 24 percent being its strongest client. China, thanks to a 38 percent export share to Pakistan, came in fifth with a global market contribution of 5.2 percent.

Who are the largest importers? It comes as no surprise that Saudi Arabia — USA’s biggest client — is also the largest importer of arms in the world. With a global market share of 11 percent, the country purchases 79 percent of its arms from the USA, followed by 9.3 percent from the United Kingdom and 4 percent from France.

Coming a close second is India with a global market share of 9.5 percent in arms import. The country came in second despite seeing a 33 percent fall in arms import between 2011 and 2015, and 2016 and 2020. India’s drop in imports was largely attributed to its complex procurement processes, combined with an attempt to reduce its dependence on Russian arms, the report said.

“India is planning large-scale arms imports in the coming years from several suppliers,” it added. 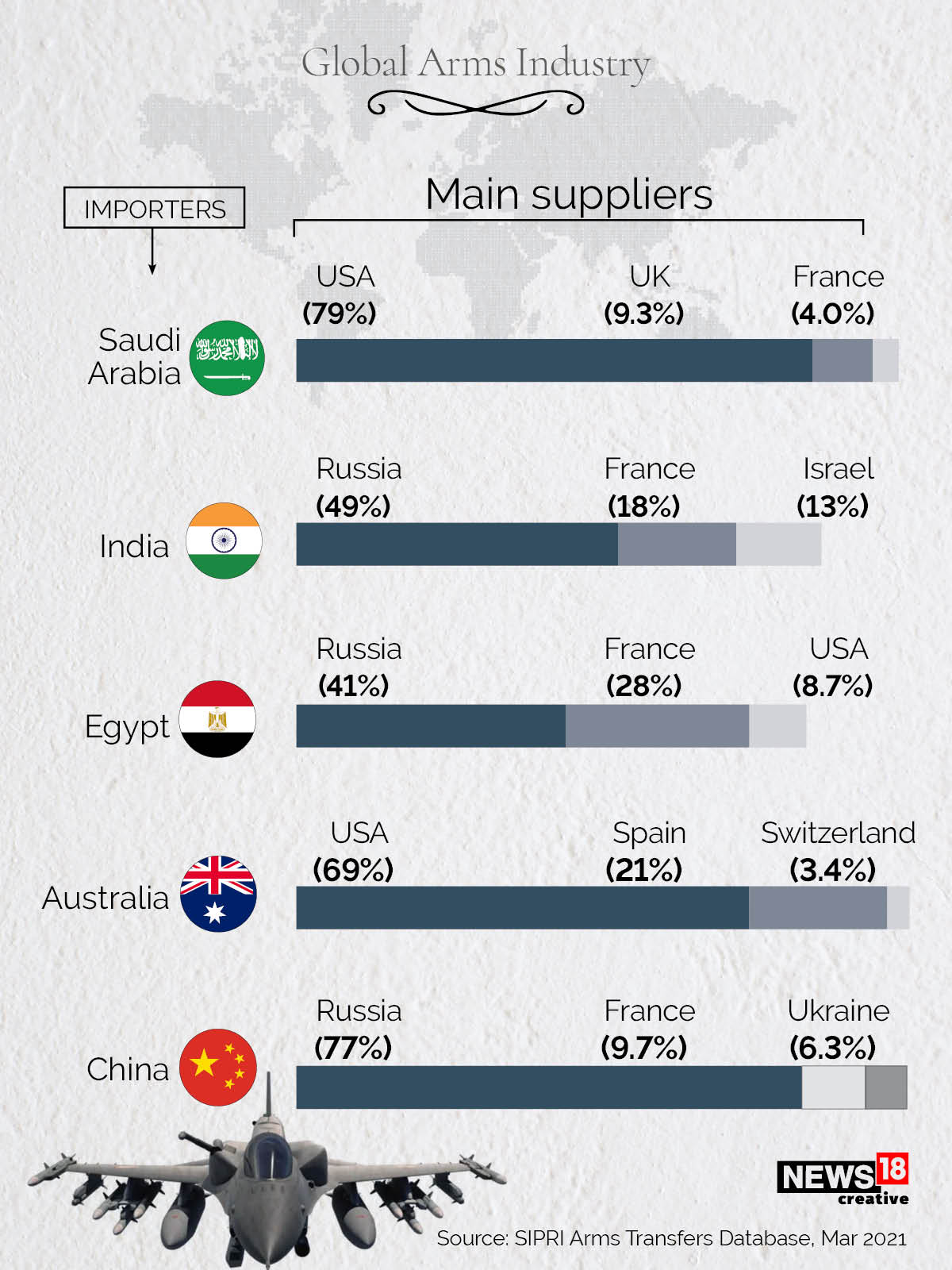 In terms of sellers, India continues to favour Russia, importing 49 percent of its arms from the country, followed by France (18 percent) and Israel (13 percent).

Egypt — the third-largest importer at 5.8 percent — appears to have found a favourite in Russia, which accounts for 41 percent of the country’s total imports.