This year, Ganesh Chaturthi will be celebrated on August 31. Also known as Vinayaka Chaturthi or Vinayaka Chavithi, it's a 10-day festival, at the end of which the Ganesh idols are immersed in water. Meanwhile, the look of famous Lalbaugcha Raja in Mumbai has been unveiled.

#WATCH | Maharashtra: The first look of 'Lalbaugcha Raja' unveiled in Mumbai ahead of #GaneshChaturthi pic.twitter.com/NOn454cIHt

Ganesh Chaturthi, celebrated on August 31 this year, is one of the major Hindu festivals celebrated across the country, especially in states like Maharashtra, Gujarat and Karnataka. Also known as Vinayaka Chaturthi or Vinayaka Chavithi, it's a 10-day festival, at the end of which the Ganesh idols are immersed in water.
The festival marks Lord Ganesh coming to earth from 'Kailash Parvat' along with his mother the goddess Parvarti/Gauri.
States issue guidelines
Maharashtra Chief Minister Eknath Shinde and Deputy Chief Minister Devendra Fadnavis removed various restrictions regarding the festivities - including the cap on the height of idols.
He also directed the state administration to repair the roads through which the processions of Ganesh idols are going to pass. He asked officials to to waive toll tax for the devotees travelling to Konkan from Mumbai, News 18 reported.
The chief minister further directed the Maharashtra State Road Transport Corporation to operate adequate buses during the festival. 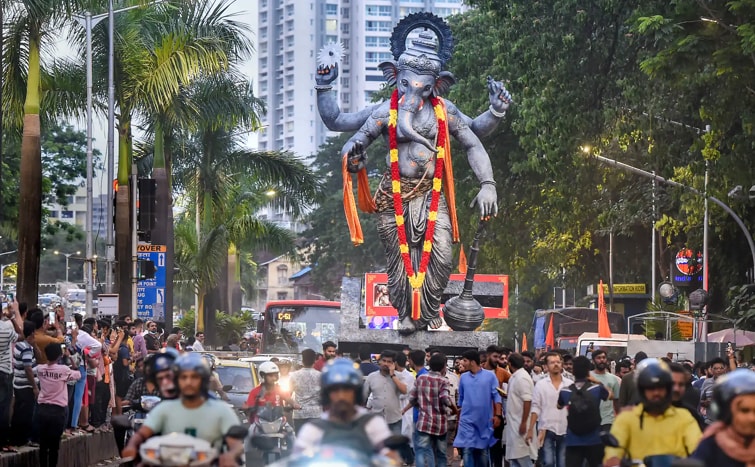 Devotees carry an idol of Lord Ganesh during a procession ahead of the Ganesh Chaturthi festival, in Mumbai on August 28, 2022. (PTI)
Meanwhile, various state governments have started to issue fresh guidelines ahead of Ganesh Chaturthi celebrations.
The Karnataka government issued guidelines regarding the rules and regulations for setting up pandals and idols in public places earlier this week. The government has notified the public of the various security arrangements that need to be made as well.
The Gujarat government also removed height restrictions on Lord Ganesh idols. The state has kept its ban on the immersion of idols made of plastic, and Plaster of Paris, among other hazardous materials and released new guidelines regarding the immersion of the idols. Devotees carry an idol of Lord Ganesh during a procession ahead of Ganesh Chaturthi festival, in Surat, Gujarat on August 28, 2022. (PTI Photo)
Mumbai's Ganesh mandal takes insurance cover
The GSB Seva Mandal, one of the richest Ganesh mandals in Mumbai, took an insurance cover of Rs 316.40 crore for the upcoming Ganpati festival.
"We have covered all public liabilities and each and every devotee who the visits mandal. We are the most disciplined Ganesh mandal, so it is our responsibility to secure every devotee of Bappa (Lord Ganesh)," Vijay Kamath, chairman of the GSB Seva Mandal located at the Kings Circle in Mumbai, said. The GSB Seva Mandal is celebrating 68th year of its Ganpati festivities.
(With inputs from PTI)
(Edited by : Akriti Anand)
Check out our in-depth Market Coverage, Business News & get real-time Stock Market Updates on CNBC-TV18. Also, Watch our channels CNBC-TV18, CNBC Awaaz and CNBC Bajar Live on-the-go!