Egypt President Sisi and Prime Minister Narendra Modi will discuss bilateral, regional and global issues of mutual interest during the day. Later, President Droupadi Murmu will host a state banquet in honour of the visiting dignitary. Here are some details of Sisi's visit to India. (Credit: @MEAIndia)
Sisi arrived in Delhi on Tuesday and received a ceremonial welcome at Rashtrapati Bhavan on Wednesday. Ahead of his meeting with PM Modi and other top officials, the Egyptian president congratulated India and said, "It is a great privilege to be a guest of honour and participate in the glorious national day."
He added that the relations between Egypt and India have been characterised by balance and stability. "We have only seen constructive development. We have been all along evolving very positively," he was quoted by ANI as saying. President Droupadi Murmu accorded a ceremonial welcome to President Abdel Fattah El-Sisi of Egypt at Rashtrapati Bhavan. (Credit: @rashtrapatibhvn)
PM Modi-Sisi meeting and other events scheduled today
During his meeting with PM Modi, Sisi will discuss bilateral, regional and global issues of mutual interest. The same evening, President Droupadi Murmu will host a state banquet in honour of the visiting dignitary.
Besides this, Sisi will attend the "at home" reception by Murmu at Rashtrapati Bhawan. He will also hold a meeting with vice-president Jagdeep Dhankhar. He will interact with the business community in India. President Abdel Fattah El-Sisi of Egypt (Credit: @rashtrapatibhvn)
Moreover, at least six agreements are to be finalised by diplomats from both sides, the India Express reported.
The Ministry of External Affairs said, "The forthcoming visit of President Sisi is expected to further strengthen and deepen the time-tested partnership between India and Egypt."
India and Egypt are celebrating 75 years of establishment of diplomatic relations this year. India has also invited Egypt as a 'guest country" during its G20 Presidency. 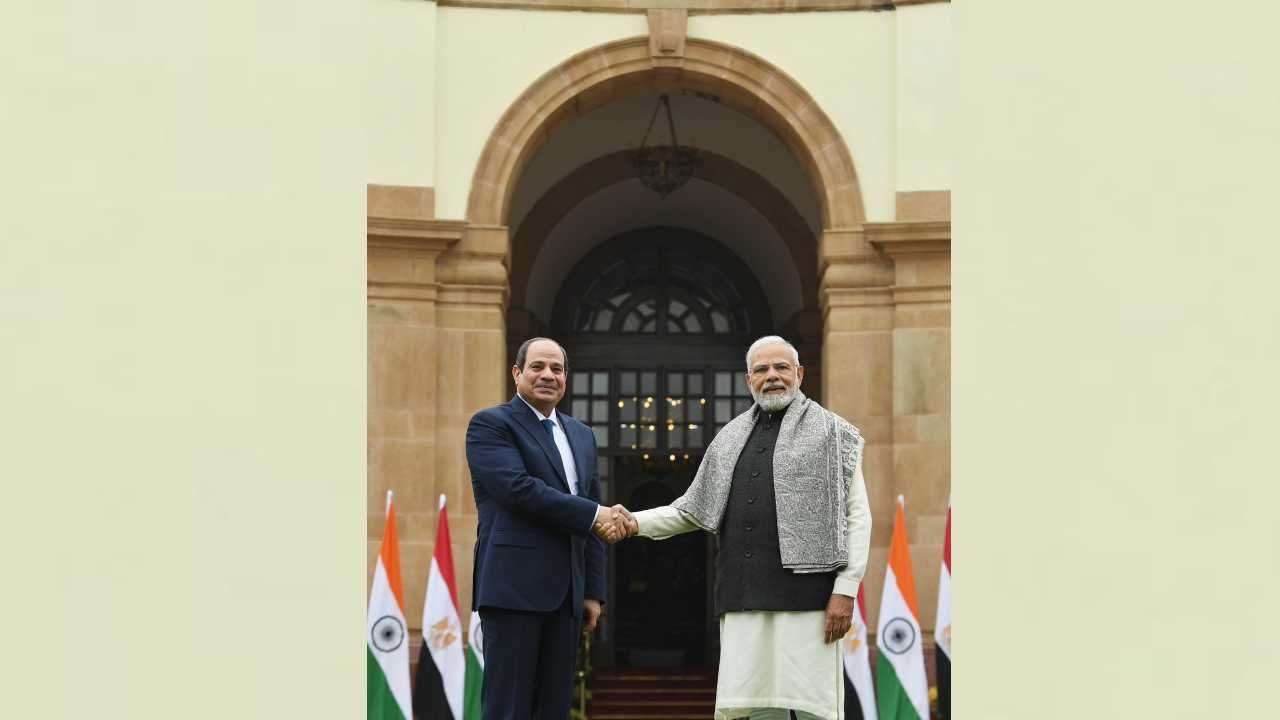 PM Narendra Modi with President of Egypt Sisi at Hyderabad House. (Credit: @MEAIndia)
Sisi is the chief guest at Republic Day event
Abdel Fattah el-Sisi reached in Delhi on Tuesday and received a warm welcome from PM Modi. "President Abdel Fattah el-Sisi is on a visit to India from 24-26 January 2023 at the invitation of Prime Minister Shri Narendra Modi. President Sisi, who is on his second state Visit to India, will also be the Chief Guest on India’s 74th Republic Day," a government press release said.
PM Modi welcomed him, saying, "Your historic visit to India as Chief Guest for our Republic Day celebrations is a matter of immense happiness for all Indians."
This third visit of President Sisi to India. He had earlier visited India in October 2015 to participate in the third India-Africa Forum Summit, and in September 2016 on a state visit.
Sisi will return to Cairo on January 27.
Check out our in-depth Market Coverage, Business News & get real-time Stock Market Updates on CNBC-TV18. Also, Watch our channels CNBC-TV18, CNBC Awaaz and CNBC Bajar Live on-the-go!