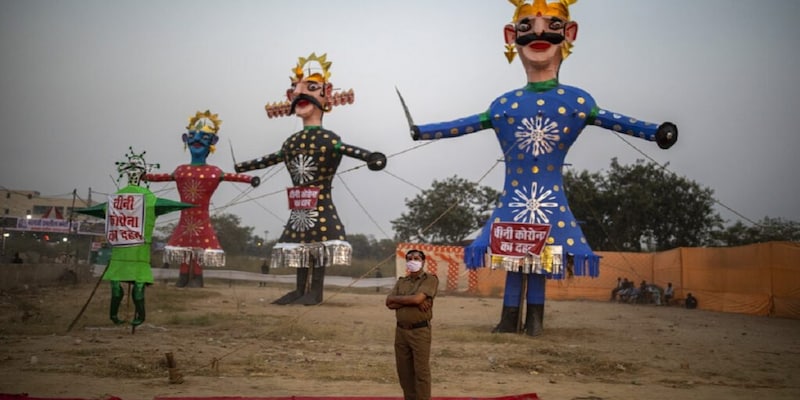 As Ravana was a learned king, many people believe that the 10 heads of Ravana represent the six shastras and four vedas, which he had mastered. Symbolically, the 10 heads could represent Ravana’s mental power which was considered to be ten times that of a normal human being

The festival of Dussehra celebrates the victory of Lord Ram over the demon king Ravana. Ravana, a magnificent ruler and a great devotee of Lord Shiva, is also known as ‘Dashagriva’ or ‘Dashanan’ or the one with 10 heads.

As Ravana was a learned king, it is believed that the 10 heads of Ravana represent the six shastras and four Vedas, which he had mastered. Symbolically, the 10 heads could represent Ravana’s mental power which was considered to be 10 times that of an average human being.
Despite being an expert warrior, a good king, an astrologer and a doctor of Ayurveda, Ravana succumbed to a medley of life’s vices. As the evil qualities took over his personality and finally led to his destruction, students of mythology came to believe that the 10 heads of Ravana represented the flaws of the king.
Here’s a look at what the 10 heads of Ravana represent.
Some experts believe that Ravana had only one head and created the illusion of 10 heads through acts of deception.
According to Ramayana, Ravana lost one head every day from the beginning of his battle with Lord Ram on Krishna Paksha Amavasya (new moon).
On the 10th day or Vijayadashami, Ravana lost his last head.
(Edited by : Sudarsanan Mani)
Check out our in-depth Market Coverage, Business News & get real-time Stock Market Updates on CNBC-TV18. Also, Watch our channels CNBC-TV18, CNBC Awaaz and CNBC Bajar Live on-the-go!