Diwali 2022: Why is Deepavali the festival of lights celebrated?

Diwali 2022: Why is Deepavali the festival of lights celebrated? 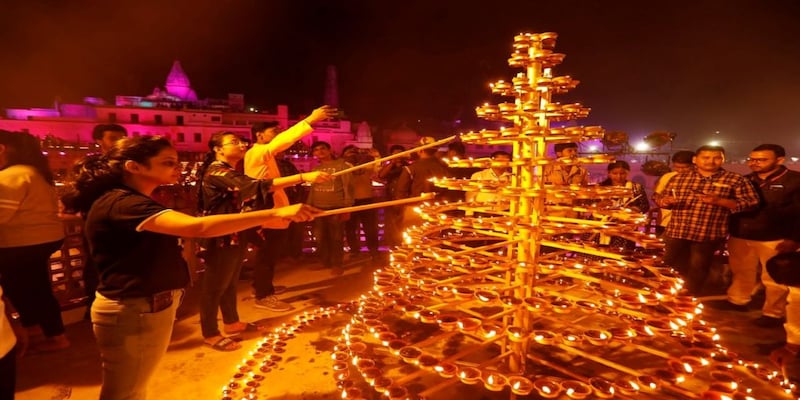 According to the epic Ramayana, Lord Ram, his wife Sita and brother Laxmana returned to the kingdom of Ayodhya after spending a period of 14 years in exile and defeating the demon king Ravana. Diwali celebrates his return to Ayodhya

Diwali, the festival of lights, is celebrated in the month of Kartik. The festival lasts for five days, starting from Dhanteras and ending with Bhai Dooj. The main event falls on the third day when Hindu devotees offer prayers to Goddess Lakshmi. Diyas are lit in every household and fireworks are displayed to celebrate Diwali.

Here are some reasons why Diwali or Deepavali is celebrated in India.
According to the epic Ramayana, Lord Ram, his wife Sita and brother Laxmana returned to the kingdom of Ayodhya after spending a period of 14 years in exile and defeating the demon king Ravana. Diwali celebrates his return to Ayodhya.
ALSO READ: Diwali 2022: How is the festival of lights celebrated?
According to some traditions, Diwali or Deepavali celebrates the birth of Goddess Lakshmi from ‘Samudra Manthan’, which is the churning of the cosmic ocean of milk by the gods and demons. It is also believed that on the night of Diwali, the goddess chose Vishnu as her husband and the duo was bonded in holy matrimony.
As per the epic Mahabharata, the five Pandava brothers returned to Hastinapur after spending 12 years in exile on the night of Kartik Amavasya. Diwali also celebrates the return of the Pandavas.
Indian mythology suggests that in Dwapara Yuga, Lord Vishnu in his avatar as Lord Krishna killed the demon Narakasura, the evil king of Pragjyotishapura. Narakasura had held 16,000 girls in captivity. In some parts of south India, Assam and Braj region in northern India, Diwali is celebrated as Narak Chaturdashi.
The Kalikula sect of Shaktism believes the last manifestation of goddess Mahakali, Kamalatmika, was incarnated on this day. It is celebrated as Kamalatmika Jayanti. Various regions in Bengal, Mithila, Chittagong, Assam, Sylhet, Odisha, and Maharashtra celebrate Kali Puja on this day.
Sikhs celebrated Bandi Chhor Diwas on Diwali as they believe it is on this day that Guru Hargobind, the sixth Sikh Guru, was released from captivity by Mughal emperor Jahangir along with 52 other Hindu kings.
Jains celebrate the festival of Diwali to mark the anniversary of Mahavira’s soul finally attaining Nirvana.
For the business community in some states in western India, Diwali signifies the start of a new year.
ALSO READ: Why is Dhanteras considered auspicious for buying gold in India?
(Edited by : Sudarsanan Mani)
Check out our in-depth Market Coverage, Business News & get real-time Stock Market Updates on CNBC-TV18. Also, Watch our channels CNBC-TV18, CNBC Awaaz and CNBC Bajar Live on-the-go!